Can a Jupiter-Like Gas Giant Have Deep, Dark Storms?

For this question, I was inspired by the following image of the "Jupiter Abyss": 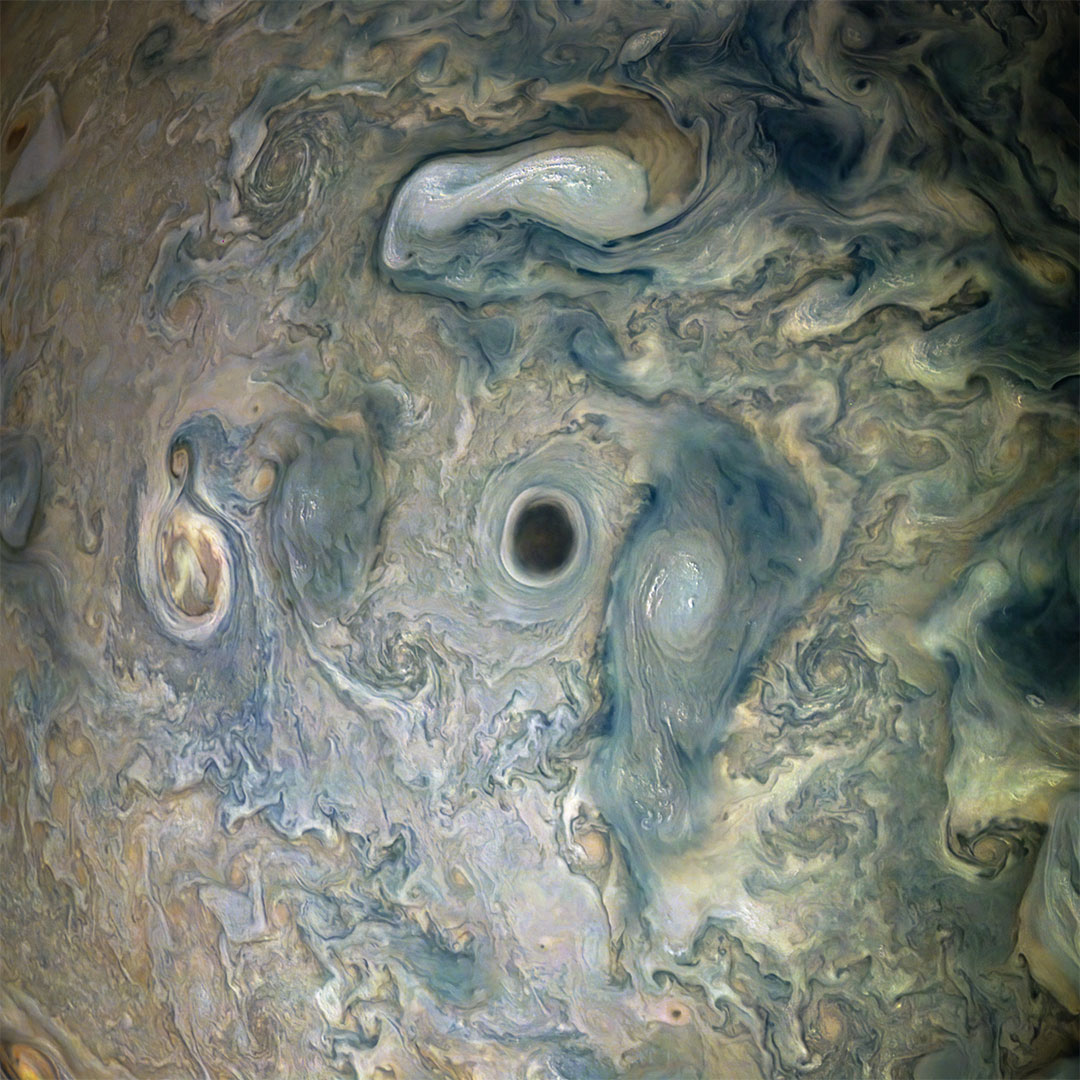 What I want to know is, can a Jupiter-like gas giant have thousands of giant black storms, kind of like what I've created in the following image? 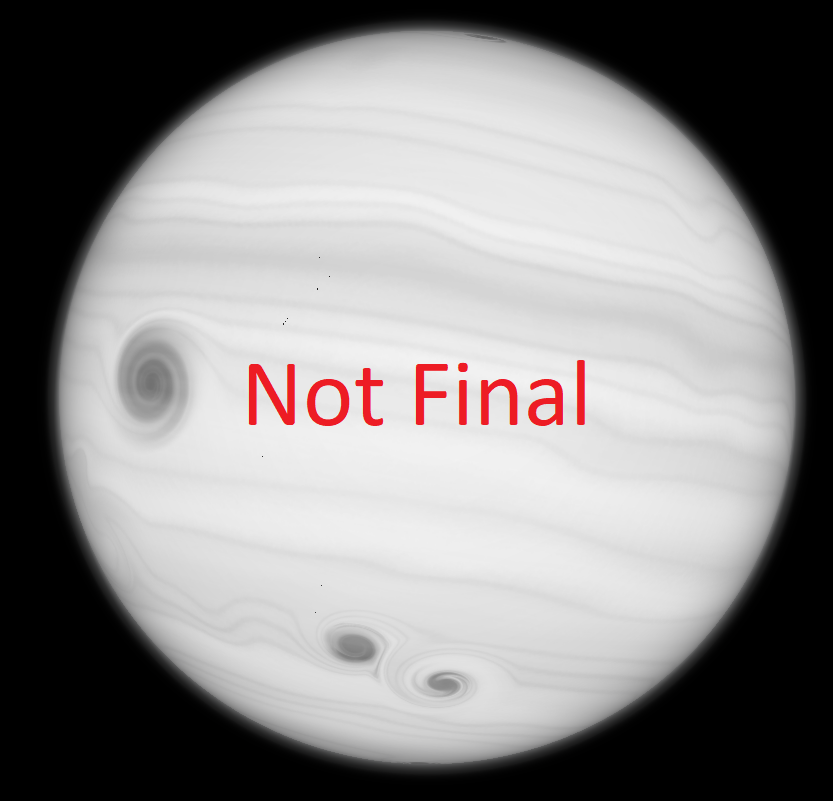 Please do not take the image too seriously, as I only did my best to mock up what I'm looking for (which is why there are only a few storms instead of hundreds). In reality, I want the storms to get deeper towards the center, making light harder to reach there, which gives the impression of a whirlpool-like dark or black storm.

EDIT: The storms wouldn't need to be persistent. They can form and dissipate, I'm just looking for them to look like tons of giant black dots from space.

This is Jupiter after being hit by Shomaker-Levy 9 in 1994: 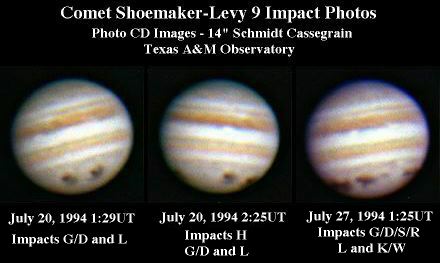 It smoothed out in days, but hey, there you have dark spots. A constant bombardment would do for a fictional planet.

Edit: while researching something else, I came across this time lapse of Voyager 1 approaching Jupiter in 1979. There are many dark spots at the boundary between the north pole and the northernmost light band.

Gif taken from the wiki on The Great Red Spot.

This is Saturn's Hexagon: 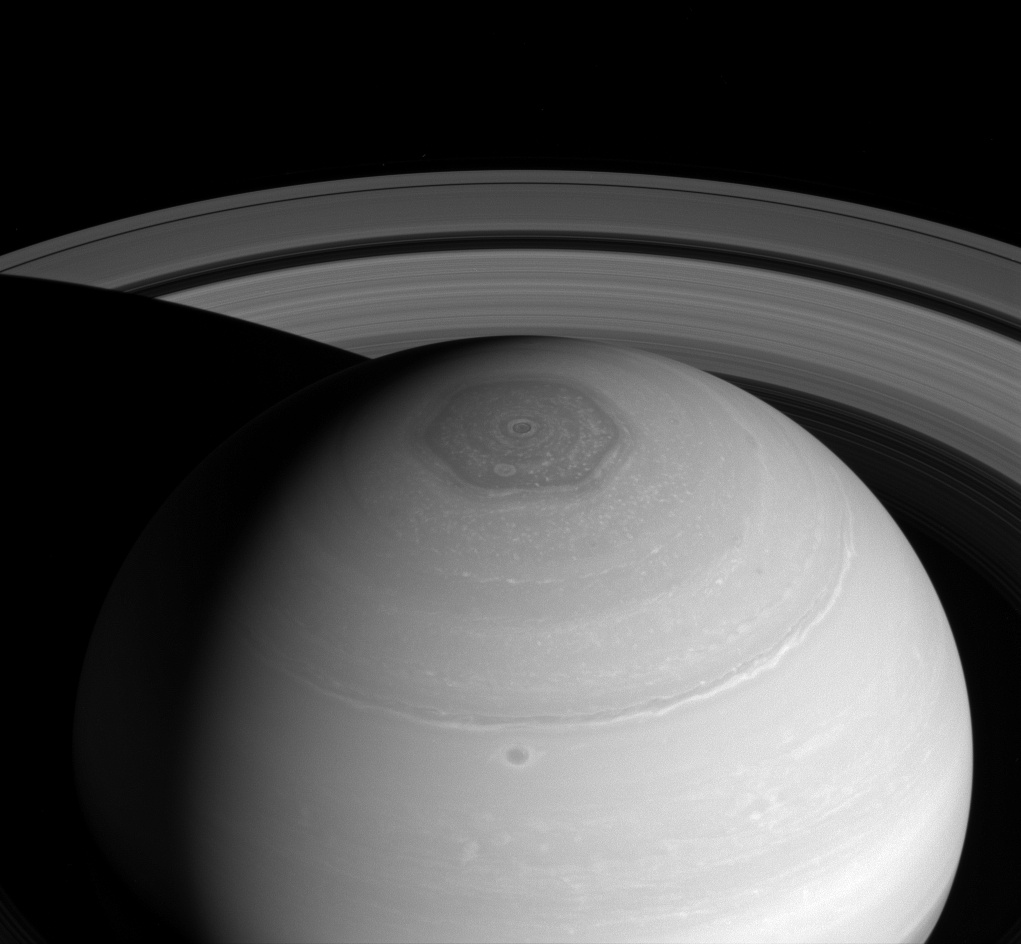 It is a permanent formation in the shape of a hexagon that rotates slightly slower than Saturn itself. It is darker than its surroundings. With the right chemistry, it could be much darker.

I think such formations could form in a gast giant in lower latitudes if you have bands rotating in different speeds.

Notice that besides the hexagon, there is another darker spot close to halfway to Saturns equator.

From another angle, more dark spots can be seen as well, in high latitudes: 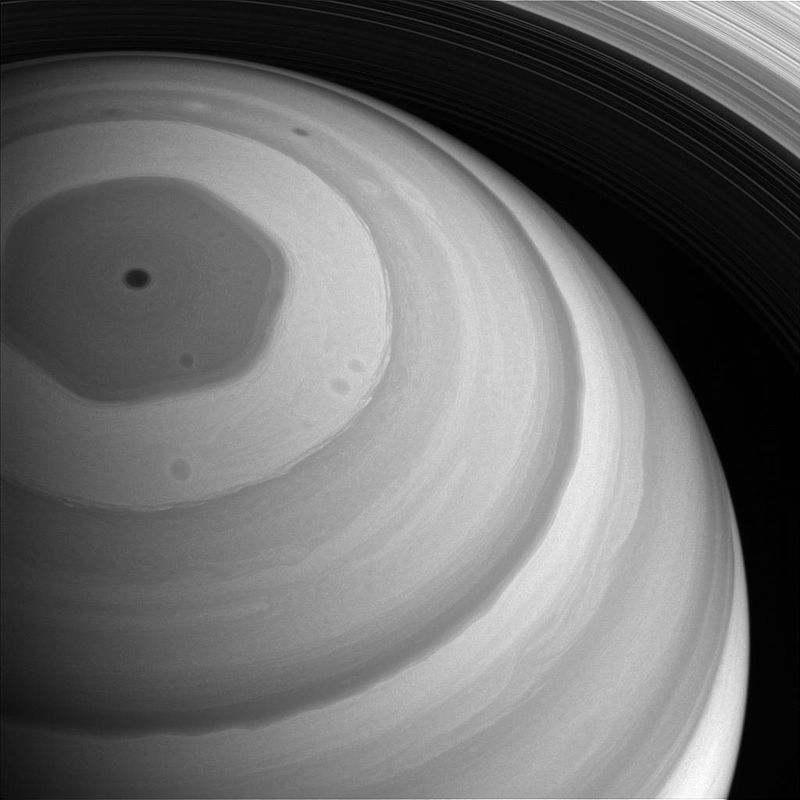 You've seen the "Great Red Storm" on Jupiter, right? You know that is a massive storm cloud with a cyclonic motion (like a Hurricane or Typhoon on Earth). This particular storm has been on going since it was first observed in 1800 and believed to be at least 350 years old and while it is shrinking overtime, suggesting it will not be persistent the storm is presently ~10,000 KM in length, which is more than enough to fit the entire planet earth into the storm. It's not the only persistent storm on Jupiter, just the biggest and visible from Earth by telescope, making it a defining feature of the planet.

Jupiter is not the only gas giant with this storm, as recently, NASA discovered a similar sized storm over saturn's southern pole (which is why we never saw it on Earth) that initial estimates of it's age put it in the billions. Can't give you a color on that storm, because it was observed in grey scale.

But the best news is that there are several "Great Black Spots" on Neptune. While not as big as the Jupiter and Saturn stoms, they are still hurricane like massive storms that, as the name suggests, are black and do swirl like a whirlpool. So it's not only plausible, but factually occuring.

And I'd be re-missed if I didn't talk about the fourth member of our solar system's gas giants, but it is my duty to report that I could not find any persistent storms over Uranus (sorry, couldn't write about the gas giants and not make joke about that one).

Like earthly storms, any storm needs an energy supply to form. This means that if a storm is forming in region A, that region won't trigger another one until the energy storage is replenished.

Add to this the inherent chaotic behavior of weather, and you see that having closely adjacent storms is highly unlikely, bordering he impossibility. Have sparse storms is instead plausible.

And don't forget that a zone of low pressure like the storm has to be surrounded by high pressure, else there would be no flow and no storm.

That's a difficult question to answer, since the climate of the gas giants works very differently from the Earth's climate.

On Earth, when two or more cyclones get very close, two things can happen: if they are of equal size, they begin to rotate around a barycenter, but if the difference in size is significant, the smaller ones will rotate around the larger one, until it devours and fuses them, creating a larger cyclone. This is known as the Fujiwhara effect.

There is evidence of fusion between cyclones in Jupiter, in fact the Little Red Spot was formed by the union of three cyclones.

Look at this image: 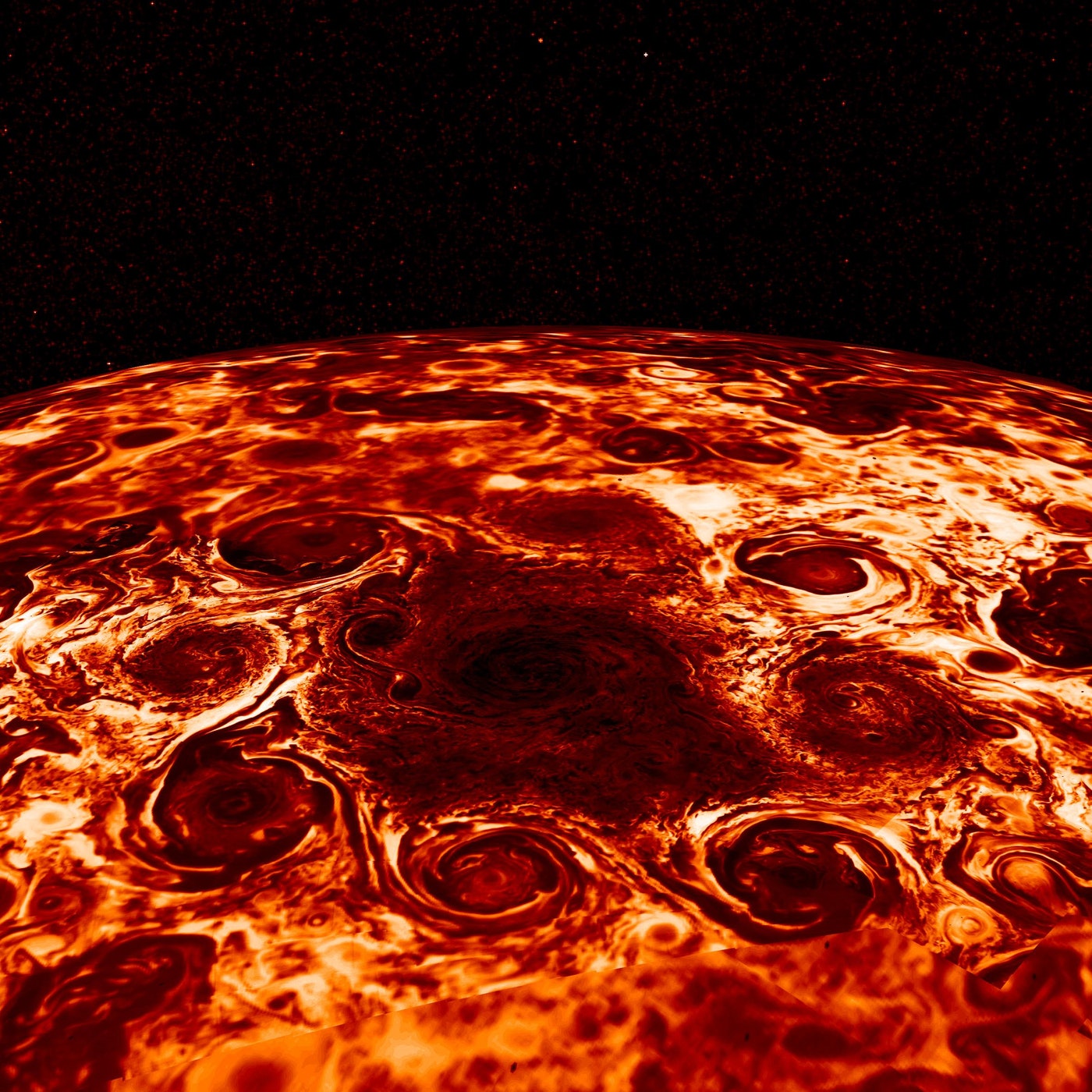 What you see is a cyclone at the north pole of Jupiter surrounded by eight smaller cyclones. Something similar occurs in the south pole, but with five cyclones instead of eight.

Their apparent stability is disconcerting, the mechanism that led them to their current state or why they do not merge as expected would not be known.

In conclusion, the scenario you pose is unlikely at latitudes close to the equator as, over time, cyclones would merge to create larger cyclones, but it could work at the poles.

Not the answer you're looking for? Browse other questions tagged science-based planets weather gas-giants or ask your own question.

36
How can I destroy a gas giant planet?
7
Seasons/Months on a Habitable Gas Giant Moon
20
How to create the eternal storm?
25
Which gas giant of the solar system could humanity mine and for what resource?
9
Cauldron of Storms: Geography to create and isolate localized mega-storms
9
Smallest Black Hole to 'heat' a Gas Giant
8
Captured Earth-Like Moons around Gas Giants
9
How can an Earth-like moon meet these angular diameter conditions?