In my world, electricity has not yet been discovered, and many advancements in society progress on a purely chemical or mechanical basis.

Lasers are incredibly useful and multifaceted tools, and I would like to be able to include this technology in my world.

I could imagine multiple sources of light (as a ridiculously underpowered example, hundreds of candles) having their light combined and focused through a series of mirrors and lenses to produce a laser-beam.

If so, where could this light come from and how powerful will my laser be?
What other problems might I encounter?

Edit: For clarification, the desired result would be a spatially coherent beam of light.

It is not just feasible, it exists.

A laser with a medium (such as a ruby) consists of a cylinder-shaped medium with a mirror on each end, one of which is fully reflective while the other one is partially reflective. The medium is given energy from the outside by a so-called pumping source. Usually electric light, emitted by flashtubes for example, is used as pumping source. But sunlight can do the trick as well. That kind of laser is called a Solar-pumped laser:

When laser weapons were in early development, considerable effort was put into chemical lasers -- that is, using the energy of a chemical reaction to pump the reaction product in a laser resonant cavity. Hydrogen reacting with a halogen was studied extensively; all the halogens can be fed as a gas (with moderate heating, in the case of iodine -- astatine wasn't studied, as far as I know), react vigorously with hydrogen, and the products can lase.

Of course, this requires the ability to purify halogens, but that was done well before electricity was a practical energy source.

As others have said, lasers do exist which don't rely on electricity. The soviets apparently experimented with a laser pistol during their space program, to blind other astronauts or satellite cameras. There's a bit of a description of it here, along with some photos of the (very home-made looking) prototype. The Soviet Laser Pistol. In brief, this gun is a charge-pumped design using an yttrium aluminum garnet (other sources say ruby) gain medium, and a zirconium flash bulb, which burned the zirconium in an oxygen atmosphere to generate an intense, single use flash (similar to old single use camera flashes). While igniting the zirconium was done electrically in that pistol, presumably you could do this with other means: a flint-lock rifle with the flash tray filled with zirconium, and the barrel filled with ruby etc. would probably work in a sci-fi setting.

As a slight aside, you said:

Electricity has not been discovered.

This doesn't necessarily mean that it can't be an electrically-based design: historically electricity was very poorly understood in the early days. Ancient Greeks knew that amber could be rubbed with a cloth and attract small particles (this is a common high-school experiment) which lead to a lot of early 'friction machine' static generators which rotated a glass sphere against a woolen cloth. These were invented before electricity was understood, and were assumed to work on some form of magnetism Electrostatic generator.

Similarly, look up the Piezo-electric effect. When certain crystals are squeezed, they produce a voltage (cigarette lighters and gas stove/barbeque igniters use this principal, with a spring-loaded hammer striking a tiny crystal to produce a spark). It's possible your civilisation could have discovered this effect without actually understanding or discovering electricity. A water-wheel hooked up to a bunch of trip-hammers pounding on crystals, for example.

There are also chemical powered laser. See https://en.wikipedia.org/wiki/Chemical_laser. they are very dangerous chemicals, but they can be very powerful.

Lasing is caused by electrons dropping for high energy states into low energy states and emitting a photon as they do so. By placing the lasing material between a mirror and partial mirror, the photons are reflect backing to the material causing more electrons to become high energy, generating more photons as the drop back into to low energy states. A certain number of the photons escape past the partial mirror. By careful sizing of the lasing chamber and by using specific lasing material to match the wavelengths of photon you get coherent waves of energy, the wavelengths are all the same and the peaks line up.

Early lasers used light energy to cause a ruby crystal to lase. With Chemical lasers you would use a chemical reaction between materials such as iodine and oxygen to provide both the energy and the lase material. 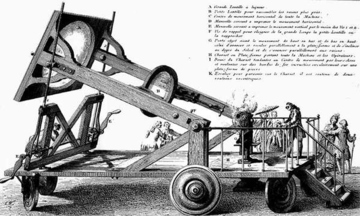 The focus can be arranged to different lengths. Legend has that Archimedes used such a device to burn ships at great distances. This feat has kinda been reproduced with limited success though (see the wiki).

You could use a prism to separate sunlight into a spectrum like Isaac Newton did, then use lenses and mirrors to focus a wavelength you like (say, red). Add a piece of viking sunstone (also known as calcite) to polarize the light edit: and a lasing medium such as a ruby and you've got a beam that is collimated and coherent in both frequency and phase - a laser!

...hundreds of candles, having their light combined and focused through a series of mirrors and lenses to produce a laser-beam...

There's a couple of good answers here that show how you can power a laser with other energy sources besides electricity. But what you can not do is use geometric optics to "focus" light from any not-an-actual-laser light source into a powerful, laser-like beam.

If you want the detailed, mathematical explanation of why not, read about conservation of etendue.

Not the answer you're looking for? Browse other questions tagged science-based physics engineering optics .

9
A light tower based communication system