How can a giant avoid collapsing on itself? [duplicate]

Ask Question
Asked 5 months ago
Active 5 months ago
Viewed 207 times
7
$\begingroup$
This question already has answers here:
What would be the tallest possible height for humanlike creatures in earthlike conditions? (6 answers)
Closed 5 months ago.

Say you have a giant, similar to those of Dungeons & Dragons. For the purposes of this question, we'll say it's twenty feet tall. Is there any way one can alter its anatomy to save it from collapsing on itself due to the Square-Cube Law while keeping a basically humanoid shape?

For twenty-foot tall giants to avoid undergoing collapse, instead of altering its anatomy it would make more sense for the giants to composed of stronger materials. Giants with stronger bones and tissues will be able to evade the usual consequences of the square-cube law.

Otherwise giants would have to become proportionally broader and wider to increase the area of their bones and other supporting structures to compensate for their increase in volume and the increase in load due to the increase in mass.

Consider the illustrative case of the paranasal sinuses. 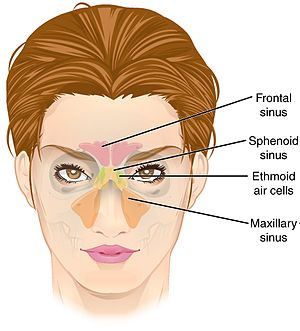 The paranasal sinuses have a wide variety of functions including lightening the weight of the head.

So too your giants! Most of their apparent bulk is full of air sacs. Birds take advantage of this same principle and at the same time augment their respiratory ability.

Being composed mostly of air would let your giant easily reach your desired size, while at the same time weighing about the same or even less than a normal human. The giants would probably want to stay indoors during windy days.

to the earlier question "Mega-human: What are the largest possible dimensions of a human?", my (accepted) answer was that a humanoid could feasibly be 7m (23 feet) tall, with a weight of 5 tons. Your 20 feet giant is a bit smaller than this, so no further modifications would be necessary than those I mentioned in the answer (unless I overlooked something). Mainly, this is a relatively larger heart to pump blood higher. You might also consider tapering your giant a bit towards the top, with legs relatively thicker than the arms and a relatively smaller head, compared to a human. The giant would after all not need a bigger brain than a human.

Sea Giants, the underwater variety of Hill and Storm.

Our current largest animals live on the seas, where the weight is distributed over a larger surface + buoyancy!

Your blue whale sees your tiny giant and laughs in her 150 tonnness!

Not the answer you're looking for? Browse other questions tagged reality-check fantasy-races scaling or ask your own question.

17
What would be the tallest possible height for humanlike creatures in earthlike conditions?
5
Mega-human: What are the largest possible dimensions of a human?

9
Resolving Environmental Implications of an Extremely Massive Mountain
3
Can isolated robots organize a revolution in a year?
21
Realistic fantasy slimes
5
Would giant worms cause environmental damage?
18
How could giant intelligent creatures afford to live in a human-majority civilisation?
4
What are some practical weapons for slaying monsters?