How could I show most of my fictional world through propaganda prospects/posters?

I have a specific idea to draw out an alternate society. My plan is to design propaganda prospects or posters. Do you guys have some tips how I could show/tell most through-out this medium to understand the alternate society I'm trying to create?

Which information would be essential to show?

What is most important is that in real first world countries political parties rarely publish political posters and prospects outside of election campaigns. Why would they? They cost money and changing the oppinion of the voters is only relevant in the time before a vote.

On the other hand in times of political unrest, that fact changes, as you want everyone on the street to prostest for or against something. What this does is showing presence. You are living in a currently suppressing policital system and you see a poster of the resistence, you know you are not alone in your discontent.

So if you describe that there are posters and other propaganda year round, that would mean something is off. If only one party ist posting those, you know its not about the vote, its about something they want. They want you to keep in line, join the military, take your pills etc. Or they show you - like levitime said - that there are other in better condition than yourself to make yourself conform to the state and life a better life.

Alternativly if there are several posters yearround by different parties maybe the political system is diffent in your alternative world. Like a world where megacorps rule the world, then this propaganda is more like ads. In this case, the parties dont need votes, they need the consumers money.

So what you need to convey is:

Some of these were supposed to be more or less objective, like the printout of a map generated by starship sensors in orbit. Both the player characters and the players could trust them to show the truth, within understood limitations. Of course the world map did not have a big X for the villain's hideout even if that was the most significant feature on the continent, and so on.

Some were supposed to be subjective and to represent the opinion or propaganda by certain non-player characters. This could be a very good thing when the player characters and the players thought they were aware of some aspects of the fictional world, and suddenly a non-player character contradicts that. That's a big clue. In both Classic Traveller and GURPS Traveller, the Imperium is sort of benign but distant and careless. A character handing out pro-Imperial propaganda leaflets is strange and interesting times make good adventures ...

But that only works when the players or the readers have an understanding of the supposed truth to put the propaganda into perspective.

Propaganda conveys information in a biased and idealistic way, in line with a political view. This political view often does not open itself to scrutiny. Fictional propaganda posters are a good way of telling about your society, both by what you show and what you don't show. This way of story telling can work as black humor, because your reader knows better and looks critically. This way of storytelling is often satirical to governments that employ propaganda. The coined term "fake news" shows propaganda is a danger for all democratic institutions as well.

If the propaganda poster shows laughing people of a certain color feasting on an exorbitant amount of nice nourishment with the text underneath Have you thanked our leaders for your feast today? then this may show that wealth is not fairly distributed in this society.

By showing the extreme idealistic government view of the world conveyed through propaganda, the outside observer will notice the unjustices of the world.

So, if the propaganda poster depicts happy farmers with their hands full of grain and a caption like "To abundance!", this means that the food situation is rather dire, and it concerns both the people and the government. 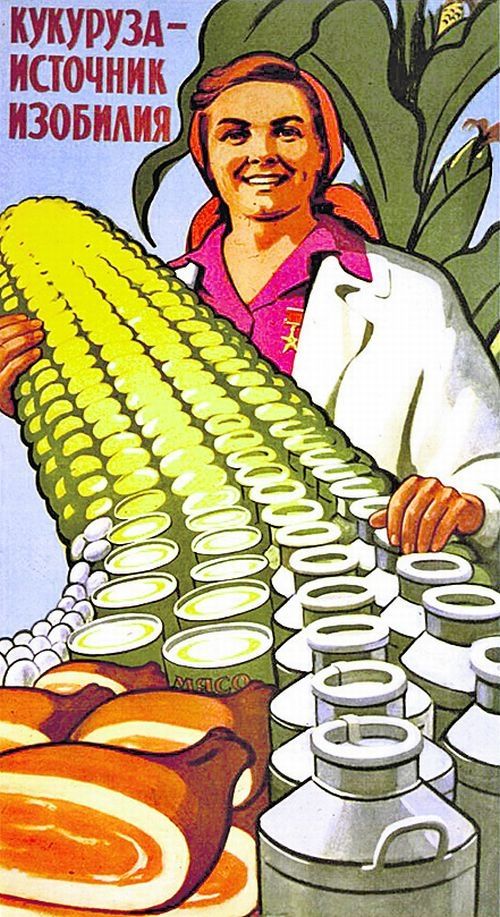 If it shows a mighty soldier crushing cowering enemies, this means that the situation on the front lines has reached a stalemate (or that there's no war at all, but the state insists that the enemy will strike soon). 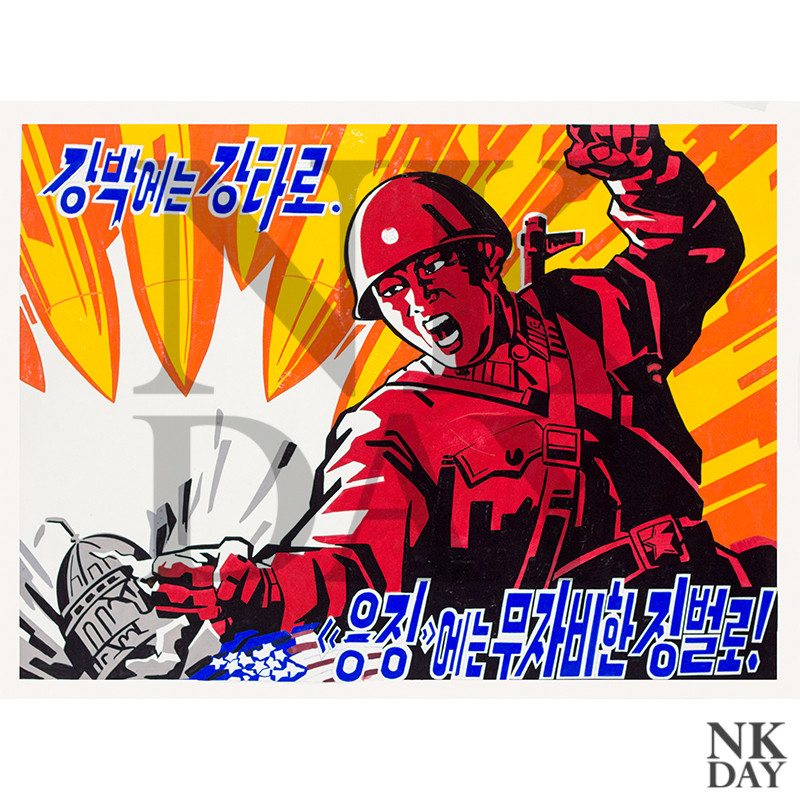 If you see a poster condemning the brutality of the enemy, this means the state cannot stop them, is frustrated about that, and tries to, at least, portray them in a negative light. 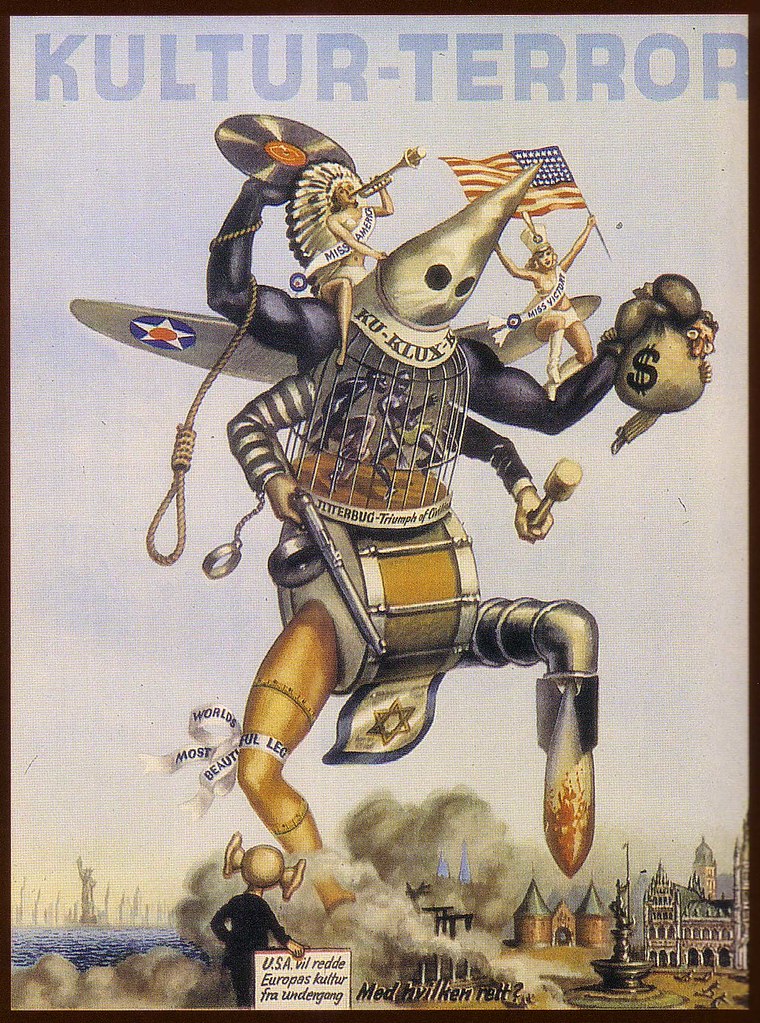 In other words, let your posters convey the goals of your government that it can't achieve, but still wants people to think something is being done.

Upd.: posters about enemies can generally mean two things. Either the state wants you to believe it's winning against whatever (when it's not), or it wants you to believe there's an enemy (when they're not a reason for concern). This depends on the composition of the poster: whether or not there's someone to defeat the enemy there.

You could have a character working for or against this propaganda, and have them describe it in the way you want to.

I don't know if it fits in your story, but they would be an infinite ways to actually make it work.

i.e : an artist chosen by the goverment to draw the prospects

Someone distributing the news paper in the streets

Advertising Propaganda shares techniques with advertising and public relations, each of which can be thought of as propaganda that promotes a commercial product or shapes the perception of an organization, person, or brand. https://en.wikipedia.org/wiki/Propaganda#Advertising

Rather than government propaganda (which seems to me to have a uniformly earnest tone) I propose that you use movie posters.

Pick a year that suits your world and google image the movie posters. They are funny, sexy, scary, zany, serious, weird and everything else. Many have serious artistic merit. They are all propaganda because they want you to pay to see the movie. It would be easy to adapt movie posters for your use. and you can lift the layout and format of the ones you like and so get some of that artistic merit for your own endeavor.

Not the answer you're looking for? Browse other questions tagged society politics or ask your own question.

7
Intelligent Animal Politics
1
Implications of Perfect CGI
26
Male psychology in a matriarchy
1
Feasibility of a civil control system on a interstellar society and how to integrate it to society without facing opposition
15
Maps in a portalized island group
5
How can we limit or avoid addiction to virtual reality in a technologically advanced society?