How one can verify if they are protected by the system (universe) without taking any risks? [duplicate]

The observer should determine whether he is in some kind of game where the system will not allow him to die while at the same time hiding this fact from him. The system can use any unsuspicious means to save him, including doctors, weather events, actions by other people etc.

The system always prefers the more probable and unsuspicious ways to the less probable, magical and suspicious. For instance after getting a fatal wound the hero learns that some scientists recently discovered how to cure it.

The system in its acts cannot break any physical laws except the second law of thermodynamics.

No, not the way you set it up.

The way you set this up, "the universe" will find a way to save your immortal character in a manner which leave doubt about if it's luck or if he's really immortal. Unless he dies, he cannot be sure that he's immortal, since he's not immortal.

Knowing that he won't know if he's immortal (or not) unless he dies or do something so dangerous that it doesn't leave place to doubt - which we want to avoid -, this character can guess that he cannot be certain, only reasonably certain.

Assuming only the protagonist is "maybe immortal", and that he is not willing to endanger himself recklessly, he should live his normal life, and every time something dangerous happens, write it down. After enough time, he'll have something like a sample he may use to do statistics. Then he'll be able to theorize if he might just be immortal, and what % of certainty he can attach to this hypothesis.

The thing is: this is not an exciting answer. The initial situation doesn't leave a lot of room th breath. Yet, if he's really immortal... he have way enough time to start and try this - and if he's not, he won't suicide himself while verifying.

By definition, you can't

If the only thing the universe (supposedly) actively protects you from is death, you cannot test this fact without risking death, simple as that. Any experiment you devise that stops short of killing yourself in some way or other will yield no usable data because the universe needn't interfere in the first place.

Any experiment that might result in your death will yield data points that are exactly as reliable as the likelyhood of you dying, i.e. if there's a 50% chance to survive the experiment, and you do survive, you're only 50% sure that the universe protects you. Thus, the risk you take determines the precision of your answer. And unless you accept a lot of risk, you can never be (close to) sure.

Playing with the parameters

I can think of only one way to kind of cheat this, and that'll only work if you're patient: Find something that is very likely (i.e. nigh unavoidable) to kill you in the future (ideally, longer than your normal life expectancy) but has observable effects in the present. You won't know for sure until it actually happens (or, hopefully, doesn't), but you might be able to observe something that hints at the outcome. This way, you gain some information in the present while deferring the risk (of death) to a point in the future where, if you were wrong, it's not likely to matter anymore because you already died of old age (or something else entirely).

Caveat: I can't think of anything in the real world that's that lethal and that slow acting and not potentially curable with 50 years of research, that doesn't also make your life a living hell. But perhaps your universe contains such a thing? 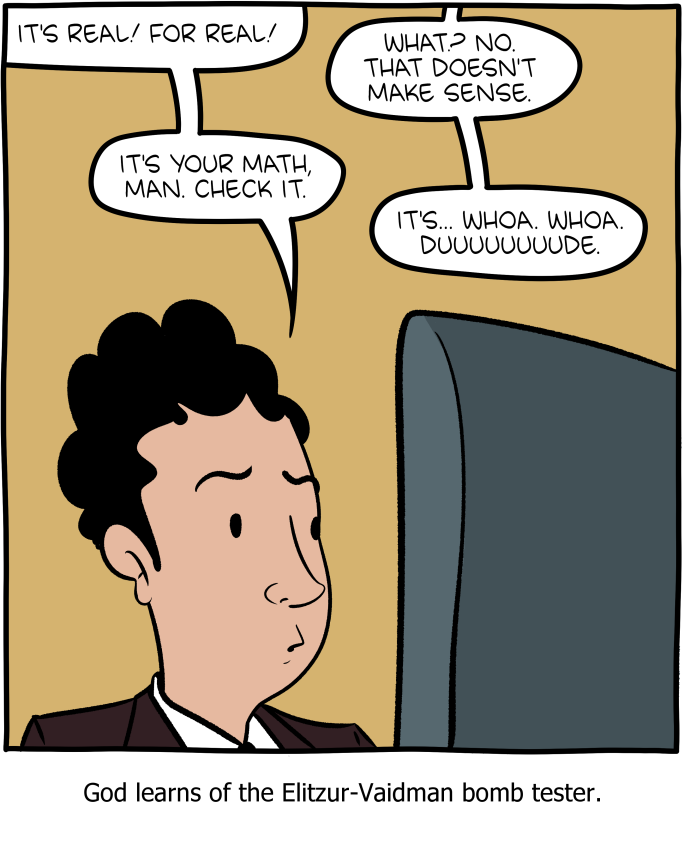 Source of the comic above

Remember Schrödinger's cat? The cat is an analogy for a subatomic particle - you can't have a whole cat in superposition (at least, not with nowadays technology). However, the cat experiment evolved into a series of other experiments. My favorite one is the Elitzur-Vaidman bomb tester, which extrapolated to the macroscopic world would be like detecting whether a bomb is real or a dud without triggering it.

Basic setup goes like this: the bomb is triggered by an extremely sensitive light sensor, so it blows up when it detects even a single photon. You get a photon in superposition as per Vaidman's experiment: 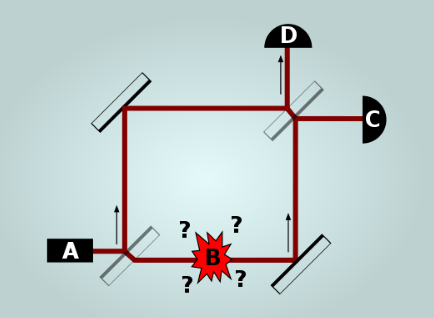 This image is from the wiki linked at the top of my answer.

The result is that if the bomb is real, you can always assert it, and it only has a 50% chance to actually detonate! The full scientific elaboration is in the wiki.

The practical thing for your hero to do is to assemble dozens of bombs that would be able to kill him, triggered by the same sensors used in the experiment I've described. Now, instead of testing it on himself, he takes the bombs to a lab and runs Elitzur-Vaidman on all of them. If none of the bombs detonate, then he knows that something in the universe might be protecting him. Otherwise, well... Fortunately he knows how to science things out from a safe distance.

He could go to war, as a mercenary or soldier, volunteer for the front line and any dangerous missions. If he survives where everyone else doesn't then he might as well go into the war business for himself and carve out an Empire.

Not the answer you're looking for? Browse other questions tagged immortality or ask your own question.

236
How to safely check if you are immortal?