Would there theoretically be an accompanying effect to something moving beyond the speed of light?

I have only encountered the "Sonic Boom" a couple of times in my life, once when I was lucky enough to watch Concorde fly over my town in the late 70's.

In a story I'm writing someone claims to have encountered/observed something that travelled Faster than Light. And obviously the question is "How would they know how fast it was going?"

I would be interested to know if there is any thought or theory as to whether a vehicle or object moving faster than the speed of LIGHT would have a similar light based effect. I assume it would create a hell of a sonic boom, but would there be a massive flash, or a mirage type bending of light as well?

Are there any other theoretical tell tale signs that something had travelled faster than light as opposed to just "Really really fast"?

For example purposes, let's assume the object in question would be roughly the same size as a passenger plane.

Yep, its called Cherenkov radiation, light emitted by particles moving faster than light in their current medium. In real life this is impossible in a vacuum, but in some materials (such as water) high energy radiation can travel faster than the local speed of light. It looks a bit like this: 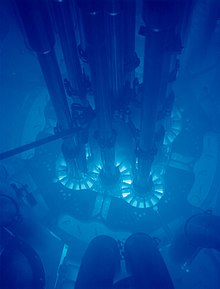 That's an active reactor core in a deep water tank.

Are there any other theoretical tell tale signs that something had travelled faster than light as opposed to just "Really really fast"?

Well, its hard to be really certain about this, because superluminal travel is problematic for many, many reasons discussed elsewhere, but here are a few thoughts.

With a ship flying towards to, as it has travelled faster than its own light, you'll be able to see the light it had emitted catching up with it. The light emitted most recently will arrive first, then light emitted earlier. This means that you'll see an "echo" of the ship shooting backwards away from you into the far distance. There's a non-FTL effect a little like this called a light echo. The "echo" will propagate pretty quickly, so I'm not sure whether you'd be able to see the effect unless the ship was travelling over a very long distance (eg. lightseconds or more).

A ship flying away from you won't show this effect, as the further away it gets the longer the light will take to reach you.

Things will probably get even weirder if you observe a flyby rather than an arrival. The first light you'll see will be from where the ship was at its closest point towards you. Then _ think you'll see the FTL-light echo receding from you, and the light of its flight away from you at the same time. If you couldn't tell front from back, it might look as if two ships appeared together and shot off in opposite directions.

Now, there are of course issues of blue- and red-shifting, but it isn't at all obvious to me that you'd see those effects on a superluminal object (inasmuch as it is possible to even have a superluminal object you could see) but as things have already tottered out over the cliff of plausibility, you could probably handwave that as you wished.

There's no way to extrapolate from the physics we know to answer your question.

In matter, interactions between the EM field (or, equivalently, the photons of the electromagnetic radiation) slows the effective speed of EM radiation to less than the speed of causality. (The effective speed is dependent on the details of the material medium and the wavelength of the EMR -- in water, for example, visible light travels significantly more slowly than x-rays.) The speed of causality is unaffected.

What does happen? As I started this answer: There's no way to extrapolate from the physics we know. The theories of Special and General Relativity describe the fundamental nature of space and time and causality and the introduction of an FTC particle simply generates contradictions with even cause and effect breaking down. This is a very strong sign that one of two things are true: (1) FTC particles are impossible or (2) Relativity is not a correct theory of nature.

In case #1, there's nothing to predict. In case #2, we know that the only theories we have that describe the world around us are wrong, so we can't expect them to make useful predictions of an FTC particle's behavior.

Edit: thinking about it a little more, what you'd likely see is a streak flashing out from the point of closest approach in both directions, forward and back...

Another possibility would be a radiation burst followed by a radio burst, as the light is red shifted/blue shifted way out of the visible spectrum and into gamma rays as it is moving toward you, and radio waves as it is moving away from you.

The usual answer is Cherenkov radiation. This emitted when particles are travelling faster than the velocity of light in the medium they are passing through. This is often seen in nuclear reactors where the particulate radiation from fuel rods exceeds lightspeed of the medium, usually heavy-water, in which they are immersed.

Not the answer you're looking for? Browse other questions tagged physics faster-than-light or ask your own question.

14
What would be the effects of traveling faster than light on a worldship?
2
Would using Magnetic Coil Platforms be an effective way to transport people across Solar Systems
11
Is there a technological difference between going half light speed and near light speed?
2
Localized manipulation of the speed of light
4
Non-causality-violating FTL travel. / Can omnipotence beat causality?
1
The characteristics and effects of high speed rotating domes
5
How fast could a Path Optimization Drive travel through Non-Euclidean/Discrete Space?