What types of stars do not have a CHZ/Goldilocks zone?

Most stars have a continuously habitable zone (CHZ), but I'm specifically trying to think up ones that do not. Aside from pulsars and black dwarfs (theoretical, as the universe isn't old enough to have one yet, but included both for argument's sake and because this is for a sci-fi setting), can you think of any types of stars that would havd a 0 CMZ?

Edit: corrected CHZ to reflect what I am more appropriately looking for. Continuous means the star lives long enough to support complex life and that the zone remains habitable throughout the star's main-sequence life span.

Not in normal cases, but you might find some on the extremes.

Consider a pulsar for example, it might have a habitable zone, but it wouldn't be overly friendly to humans.

Although pulsars regularly blast out deadly gamma rays and X-rays, alien planets in orbit around them could theoretically be habitable, a new study finds.

The researchers noted the habitability of planets around pulsars depended on at least two key findings. For one, atmospheres a million times thicker than Earth's are likely needed to protect any life on their surfaces from pulsar radiation. This would make conditions on these worlds similar to ones found in Earth's deep seas.

Or something cool enough to have the CHZ very close to the star, that then periodically flares up to such an extent that it roasts everything.

On August 13, 2017, the Next Generation Transit Survey (NGTS) telescope spotted an intense solar flare from a tiny star barely bigger than Jupiter. But despite this sun’s diminutive size, the flare gave off as much energy as 80 billion megatons of TNT. That’s 10 times as powerful as the strongest flare ever observed on our own sun. It’s also the coolest star ever observed to give off such a hot flare, and the spectacular outburst is teaching astronomers the power of small stars.

If you include the criterion that planets must be able to stay in the CHZ long enough for life to evolve, then any star more than about four times the mass of the Sun would qualify — class O and B stars, roughly speaking. Those stars will only live for a few hundred million years at best.

Brown dwarfs (BDs) are a good candidate for planets not lasting long in the habitable zone. BDs burn deuterium but not hydrogen. That means that, once the deuterium is gone, BDs just cool off in time. They have habitable zones that simply sweep inward. Here is an example: 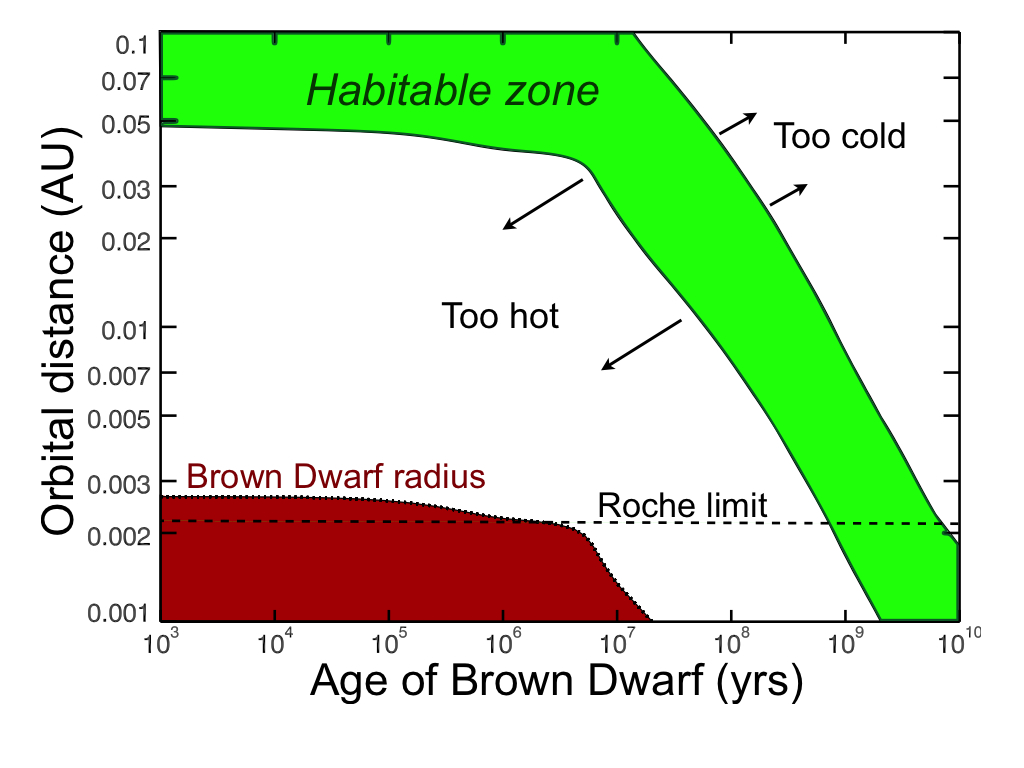 A planet on a fixed orbit will start off too hot, then enter the habitable zone, and then leave it. Different-mass brown dwarfs evolve at different rates, such that planets have a range of maximum habitable zone lifetimes, which are typically 100 million years to a billion years.

On a side note, the concept of the "continuously habitable zone" needs some numbers on it to be useful. Stars brighten slowly during the main sequence because the mean molecular weight of the core increases as H becomes He, and this moves the habitable zone slowly outward (more on that here: https://planetplanet.net/2019/02/13/how-planets-die-roasted-toasted-and-swallowed-by-their-evolving-stars/). But all stars die eventually (even red dwarfs, although it probably takes hundreds of billions to trillions of years).

The Goldilocks zone is that region of space around a star where the energy flow is sufficient to allow conditions compatible with life.

Since energy flow diminishes with the square of the distance r, $I(r)=I_0/r^2$, the only way for not having a goldilocks zone at a certain distance is to have the star emitting already less than the bare minimum to sustain energy flow needed to sustain life.

Any other star will have a distance at which the energy flow has the right value.

Not possible. The only way such a thing could exist would be if there were a type of star which emits so little radiation (in any part of the E-M spectrum) that even a planet immediately adjacent to its surface would not be warmed to a temperature of 0C.

Not the answer you're looking for? Browse other questions tagged science-based science-fiction solar-system habitability .

40
Habitable moon of a gas giant: working out the sizes and distances
3
How to adjust our Goldilocks Zone if Nemesis turns out to be real?
5
Could more Earth-like planets exist in our Sun's "goldilocks" zone?
14
Is there a habitability zone between the primary and secondary stars of a binary star system?
1
What are the upper and lower year lengths for a habitable planet of 40 Eridani A?
8
What would be the climate patterns on a lush life-bearing moon orbiting a gas giant in the goldilocks zone?
5
If Thorne–Żytkow Objects Exist, How Far/Wide Would Their Habitable Zones Be?
15
Is an oval goldilocks zone possible?