Essentially, I'm trying to make a character with similar abilities to Marvel's Reptil, but more scientific than mystical. The explanation I have for his powers so far is that an alien device injects him with a super retro virus that allows him to access the DNA of all prehistoric reptiles and dinosaurs on Earth. As for how he shapeshifts with this, I'm thinking he also has an advanced network of nanobots connected to his nervous system that can alter his molecular structure whenever he shapeshifts. However, maybe nanobots wouldn't be necessary if he has some sort of super cells that can do something similar. Either way, this would require a tremendous amount of energy, so what could be a plausible explanation for his power source? An advanced alien battery perhaps? As for how this wouldn't break the law of conservation of mass, well, animals grow as they age due to mitosis, right? So in order for him to grow into a dinosaur, he would have to perform mitosis at an incredibly fast rate, right? As for his energy problem, I'm thinking he would also need to drink large amounts of water and eat a lot of food for his cells to do this, which is why I thought of the nanobots in the first place. Anyway, my science probably sounds a bit shoddy to you guys, but I'm striving to be as accurate as i can for these powers. Please give me any feedback, point out any flaws in my explanation, list some laws that would be broken or abided by, and propose alternative explanations for this character's powers. Thanks. 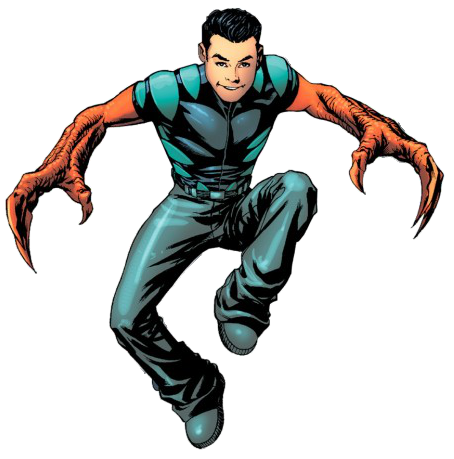 Essentially, I'm trying to make a character with similar abilities to Marvel's Reptil, but more scientific than mystical. The explanation I have for his powers so far is that an alien device injects him with a super retro virus that allows him to access the DNA of all prehistoric reptiles and dinosaurs on Earth

Slight change: the alien device is a remnant that somehow survived an unforeseen catastrophe some 65 millions years ago. Like all the technology of those particular aliens, it's based on e-Dust (aka nanobots or nanites). These devices are capable of self-repairing (provided enough specialized "brain" cells survived), some of them can store energy and even produce it via controlled low-energy nuclear fusion.

Your character's reptilian limbs are templates recorded back in the day, and are made up of nanofoam - it's actually very lightweight, but several times stronger than steel, so it can mimic solid flesh. To add mass, it can absorb and retain water from most sources, additionally using a minuscule portion of it as nuclear fuel.

That was the method used by the alien probe to mingle among the dinosaurs it studied, before that annoying accident with a 20-km meteorite.

it doesn't necessarily have to be shapeshifting perse, he could have the scales under his skin then he flips then out like a pufferfish, or those shirts when you push on them one way and there black and rub your hand over them the other way and there white. All the matter is already there just hidden inside him or think of an octopus they modify booth color and texture it could be a combination of all those things. this skips all of the laws he can access the DNA telling his body where to put all the pieces where they should be. Sound cool Happy Building

Not the answer you're looking for? Browse other questions tagged science-fiction energy shapeshifters dinosaurs or ask your own question.

57
Would a fighter pilot with an invincible space ship be able to conquer the galaxy?
2
Anatomically correct Kryptonian, part 1
5
Correct Handling Of Alien Invasion's Afteraffects
15
What would the scientific explanation be for an energy source that can last 130,000 years?
9
A plausible scientific explanation for Late Cretaceous dinosaurs DNA to be preserved, and viable enough to be cloned (or closest recreation)