What are the benefits and disadvantages if a creature has multiple tails, e.g., Kyuubi or Nekomata?

What are the benefit and cons for a creature with multiple tails (at least more than two tails)? In biology's point of view, especially to mammalian and reptile types?

Will it at least help the animal keep balance or will it make it worse? And how many tails can a creature have based on their body size?

One potential use could be to create a flexible, spread-out surface for flying or swimming. Birds and aquatic animals have wide, flat tails for this purpose, but these flat tails are generally inflexible, capable of only a single point of articulation. Multiple tails with skin stretched between them would be more flexible and add an extra degree of maneuverability.

As an analogous example, bats are more agile than birds because their wings consist of multiple fingers, adding extra points that the wing can bend and fold. Birds never evolved this because their wing evolved from an arm, not a hand. It is very rare for evolution to add a new limb even when it would be beneficial, especially for something as precisely built as a wing.

Multiple tails could also be spread out like a peacock's tail to attract mates, but this is unlikely to be beneficial enough to appear on its own.

Multiple tails would not provide much extra control for a non-flying animal. Animals that use their tails for control while jumping use them as counterweights; there is no extra benefit for using multiple counterweights as opposed to simply increasing the weight of the single tail. If you want a non-flier, non-swimmer to have multiple tails, perhaps it evolved from a flying or swimming species and re-adapted for land, keeping the multiple tails for attracting mates.

Some birds have their tail feathers set in such a way that they seem to have double tails. 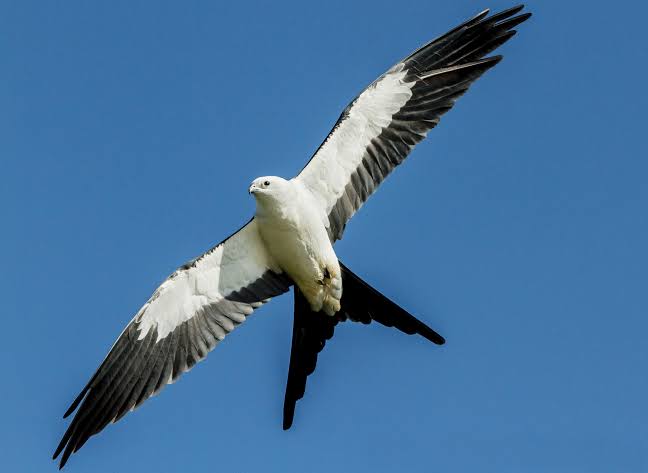 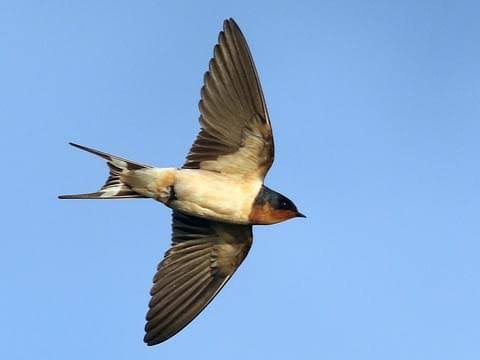 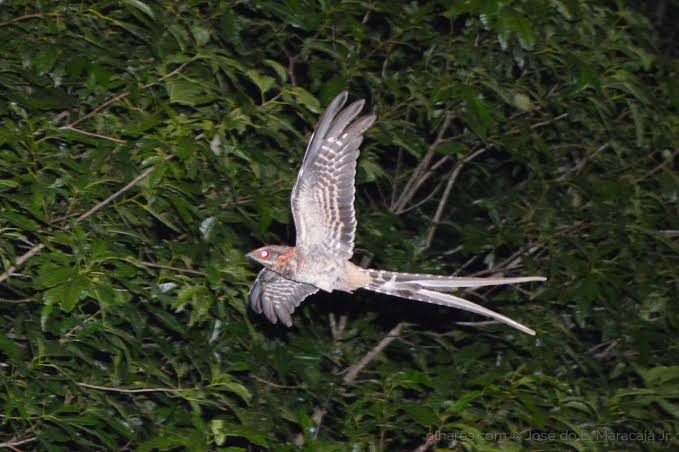 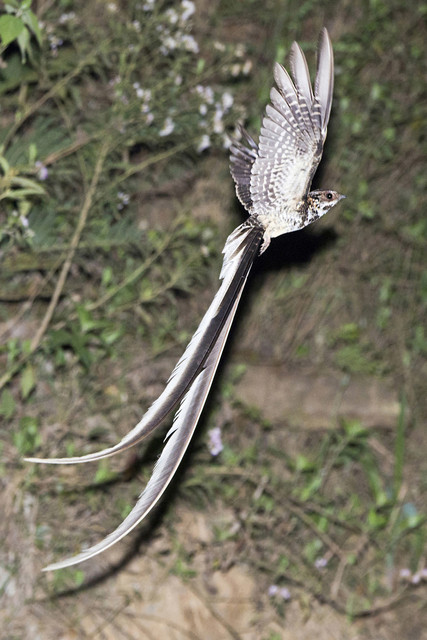 Evolution tends to weed out traits that are deleterious, so these tails either help them thrive or in the very least don't interfere with survival. At least in the nightjar's case they could make the bird easier to catch, so there must be a benefit in it to balance things out.

A true double-tailed bird could evolve so as to have very fine control on each tail, making them more agile in flight.

In my opinion, there isn't much benefit from having more than 1 tail. The issue is that almost all animal tails extend off the base of the spine. This essentially gives some animals an additional 5th limb, which they can use to grab onto thing (Monkeys) or balance themselves (Kangaroos or Cheetahs).

Having more tails extend out of this base wouldn't help because:

In terms of thickness and strength, this will all depend on the purpose of the tail. You can see that Crocodiles and Kangaroos have incredibly thick tails which they can use to lift themselves out of the water or stand on (temporarily). Likewise, animals like the Cheetah have much more uniform and thinner tails which they can move around quickly to help balance themselves out.

Quoting from my answer here: https://worldbuilding.stackexchange.com/a/87462/21117

A tail is an extension of the spine. That means the tail bones do have part of the spinal column passing through them. If the fox's tails are actual tails, then the spine nona-furcates(?) at the base of the tails, leading to effectively nine independent limbs with associated motor and sensory functions. It also means a significantly larger processing facility and muscular structure needed to control them, which ties in with the Kitsune legend of needing a hundred years to grow each tail. A newborn with nine tails would be at a severe disadvantage due to the resources needed to develop eight additional limbs plus learning to coordinate 13 limbs at a time.

If they aren't tails, they're hairy outgrowths, like, as people above have pointed out, peacock feathers, of limited movement and only really secondary sexual characteristics. A muscle at the base pulls them up and out of the way when needed but that's it. That means that while not very mobile, they're not very heavy either, and since they grow in at about 2 cm/month, the fox will have plenty of time to adjust, much like horses do.

So, what does that mean for our fox? Firstly, in both cases the tails would develop after adulthood. In the first case, the fox would have to develop the brain power to manage nine tails, at which point it would be smart enough to not need to hunt, i.e., probably smarter than most humans. Alternately, it won't and much like other mutants will die painfully. In the second case, the fox has one true tail and eight, for want of a better word, quills. These will have to be far shorter than the true tail and will only really be used in mating displays or as intimidation. At other times, they will be tucked safely out of the way.

From a biological standpoint, there isn't much benefit to extra tails other than symmetry, redundancy, or as a display. Otherwise, we'd probably have seen at least one mammal evolve an extra tail by now (after all, we've seen plenty of mammals, including ourselves, lose their tails).

Because the tail is an extension of the spine, it's a little difficult to evolve multiple tails, as it needs certain kinds of joints we haven't really seen in the animal kingdom. Since the spine sits on the line of body symmetry it's easier for it to extend through natural selection than to split. The tail connects at the body not in a ball joint, but in a vertebral joint. It is conceivable that you would need some kind of exotic ball joint to support multiple tails, or some kind of "multi-vertebral" structure. Both vertebral and ball joints are only between two bones, however, and there are very few examples of multi-bone "locus" joints in the animal kingdom, much less movable forms of these.

It is perhaps important to note, however, that a nekomata has a "forked tail," in that it connects to the body at a single point like a "Y" shape. It is a bit strange that nearly every nekomata depicted in anime and manga doesn't have the forked tail, but two independent tails. The forked form would probably be more likely to evolve than say something like a nine-tailed fox, where all of the tails connect at one point together.

From a mythological standpoint, the extra tails are a sign of the creature's power. A nine-tailed fox starts with one tail, then gains an additional tail for every 100 years it lives until it has nine, then begins losing tails for each of the next 100 years. When the fox no longer has any tails, it becomes a god.

For nekomata, the legend is that when a cat is 100 years old, it will transform into a nekomata and its tail will fork. To prevent this, sometimes Japanese cat owners would remove their tails if they began to live a long time. This robbed the cat of its power and thus its ability to become a nekomata.

In both the legend of the nekomata and the many-tailed-fox, and in the folklore surrounding them, their magical prowess and power is stored in these extra tails.

Dogs use their tails for communication. Having more tails would make their communication several times more expressive, and evolution could favour that trait in a social animal. Furthermore, artificial selection could also favour it in a pet.

You can see how cute and expressive is a three-tailed dog: 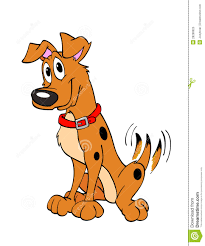 Multiple tails can be advantageous for other animals which communicate by them. For example, a double tailed peacock would be impressive.

In fact, that's not very different from what has already happened with flowers under artificial selection: roses and other species got multiple layers of petals where their wild ancestors just have one.

I know of at least two series where the number of tails is proportional to their power. Naruto for example, as he gains more of the kyuubi's tails becomes stronger. There is also the manga Hyper Police and the demon fox Sakura, who is short of the full nine tails and is taken as a sign that her powers have not fully developed.

The disadvantages can be the same, by having more or less tails can have particular meaning to the creature/species. If the species normally has one tail, what would not having that tail mean, either naturally or due to an accident? Having more tails could also show other traits.

Not the answer you're looking for? Browse other questions tagged science-based biology creature-design xenobiology fauna or ask your own question.

12
How can a nine tailed fox catch its prey?

2
The growth and development of the fox's nine tails?
11
Vertebrate-like creatures with more than four limbs
15
Centauromorphs: Anatomical terminology for duplicate body regions/parts
1
What muscular changes would a different hand structure require and what would be the benefits?
8
Can a horse-sized flying creature grab and carry a human's weight while flying?
18
Would an evolutionary predecessor for winged quadrupeds start with four legs and gain wings? Or start with two legs and wings and gain extra legs?
2
The chemistry of a long living (alien) animal
1
How could an eusocial dragon species of elemental castes work?
0
Making a Predator For Bitbugs