Northern Great Lakes in an Alternate Island Africa--Would the Sahara DESERT Still be Around?

Recently, I found this map of Africa's paleolakes in the Imaginary Maps reddit: 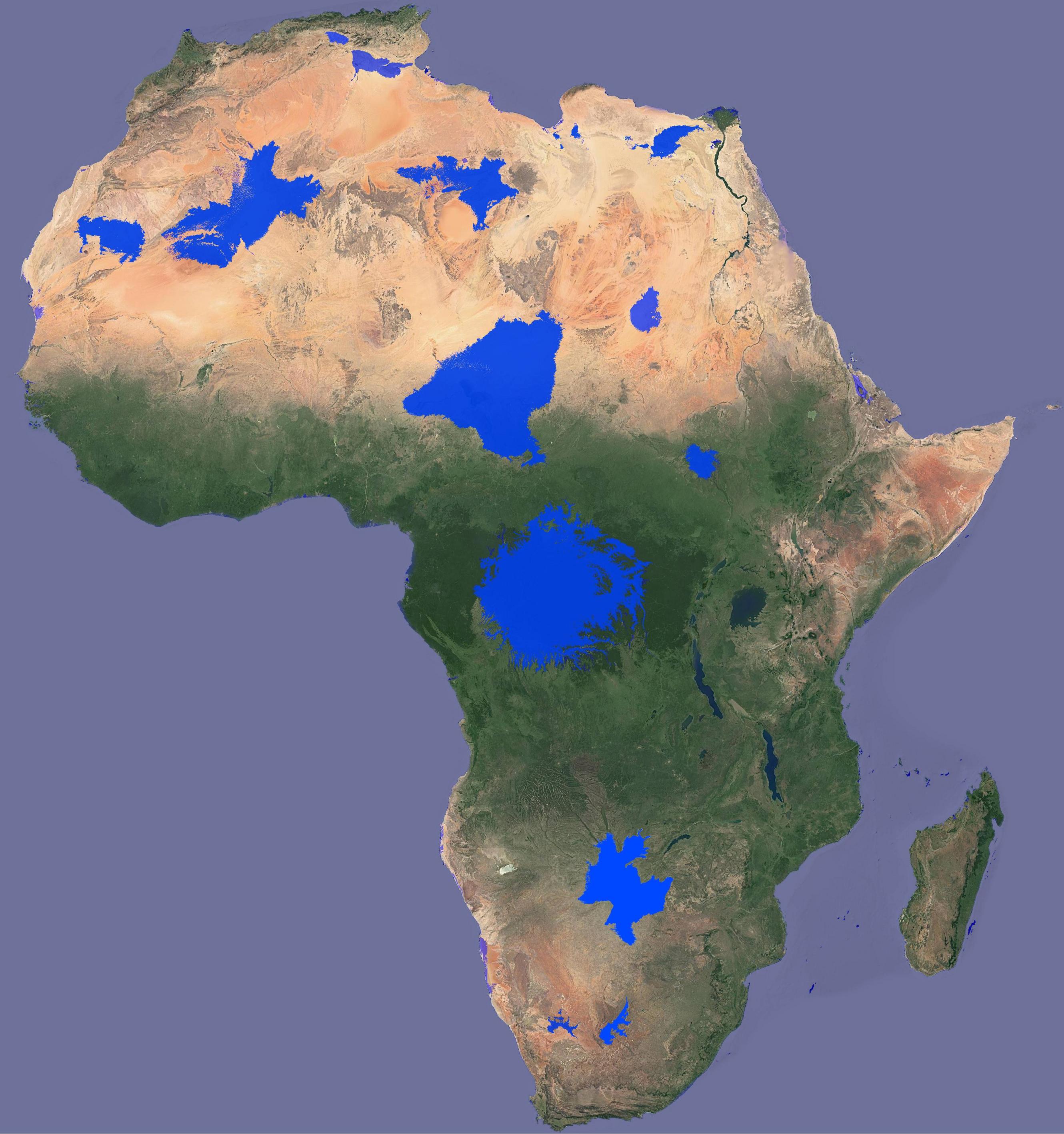 Finding this map was mere coincidence, but this map definitely interests me. Now there have been multiple what-if, worldbuilding and alternate history scenarios set in this Sahara with freshwater lakes instead of nothing but rock and sand as far as the eagle eye can see, but I would like to take this a bit further.

Finding this map was mere coincidence, but I have been imagining an alternate Earth in which the Tethys Sea never closed off (in translation--erasing Turkey, Iran and the Arabian Peninsula from physical existence, turning the Mediterranean, Black and Caspian seas into one.)

In advance for anyone who'd like to know, I'd like to bring up a backstory on the lakes of this Sahara. It's simple--they are where fault lines sink to the aquifers of North Africa, making the lakes similar to the Mexican cenotes, flooded openings of underwater caves.

Combining all of these details accumulate into one question--would we still have a Sahara Desert of one form or another?

Note that the Sahare wasn't always a desert. It switches climate between lush grasslands and inhospitable desert and did so the last time maybe as recently as 5500 years ago. This is part of the climate veriation due to the Milankovitch cycles, the same mechanism responsible for the ice ages.

Some of the lakes actually exited back then due to the higher precipitation the region received. Lakes like the Magreb Sea South of the Atlas, Lake Fezzan in southern Lybia and Lake Chad, which used to be huge were not the reason, but merely a symptom. Scientists aren't yet certain which of the lakes actually existed and were they did. Lake Megachad is the only truely confirmed lake, the others may ory may not have existed. You can see that there was still some desert around, yet the climate was more moderate in general. 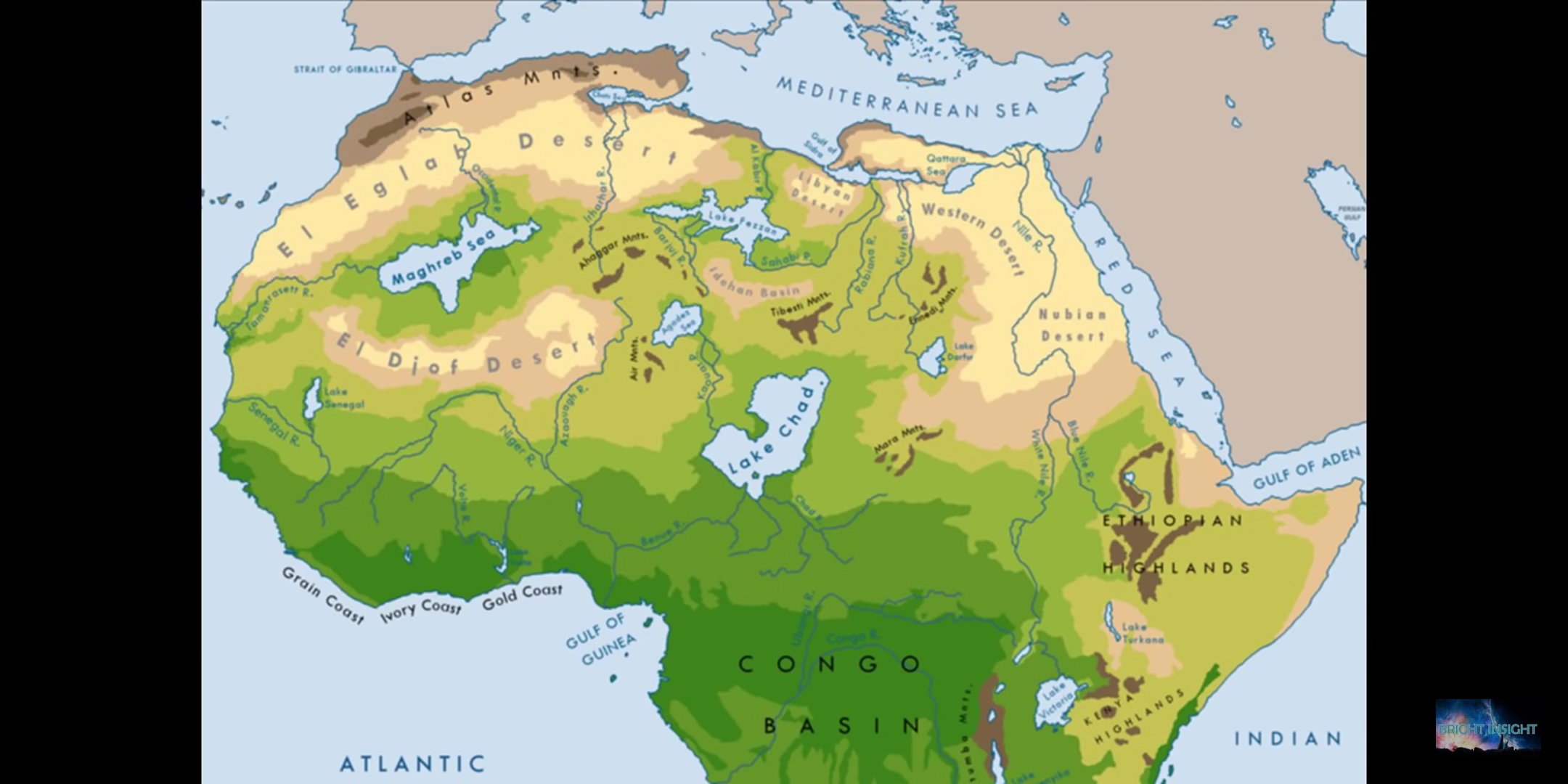 Was there still a Sahara desert around? Yes, no, maybe? There were three major deserts and several smaller ones in the region. Is one of the the Sahara? I don't know.

I think this climate map could be applied to you alternative Africa as even with the large Thetys ocean to the North-East no water would be deliver to this side of the continent as the prevailing winds would blow eastward. At least this is what I think, to be certain I would need an exact map of the alternative world to figure out the new ocean currents and thus the new costal perception and climates.

If you have a lot of time on hand this article about the African Humid Period discussess the matter in great detail.

If I understand you correctly, you are asking if the Sahara region would still be a desert in your proposed scenario. The short answer is probably not. Look at the borthern region of South America. Similar equatorial position, but the presence of abundant water instead creates a dense jungle, which is also true of central and southern Africa (minus the equator part). Now, the presence/absence of rocky mountains would also factor in, and there is no quick way for a non-meteorologist to tell how the presence of water in northern Africa would affect global weather patterns. However, the presence of water would mean vegetation, which would prevent erosion, and so the region would definitely be unrecognizable to us if had kept its lakes.

Not the answer you're looking for? Browse other questions tagged science-based climate geography deserts water-bodies or ask your own question.