I'm trying to find explanations for a strain of beans (or any other food-producing plant) that have become large, maybe as large as most trees, and about as wide in girth, that overgrows countries into huge bean-filled forests.

I started by saying that a larger strain of plant had been selectively bred (Not GM, please! That's far too generic!) to be large as bush, strong, able to grow anywhere, and have enormous yield. I chose beans specifically because their produce can be used for both food and replanting.

I then imagined that, because of the plentiful seeds, these large plants began to grow in undesired places, and, by very unlucky natural selection after overuse of weed-killers, another strain of larger size and weedkiller resistance evolves.

I can't find an explanation for any further growth than much more than a bush. What other reasons might there be for accelerated growth of these plants?

Also, is there another, more suitable plant that could grow to huge sizes?

Note: I may have said earlier, but I really want to stay away from dull, generic explanations such as "Nuclear radiation" or "Genetic modification". I'd like to explain this in terms of natural laws such as evolution or survival of the fittest.

What would be far more likely is that humans would find some incredibly productive bean plant that grows in a far off corner of the world, fall in love with its delicious beans, and transplant it back to their home nation. Luckily for the farmers, this new bean grows great in the local soil! Unluckily for everyone else, this new bean grows great in the local soil. A few years later, as the beans grow over all of the native trees and crush/smother them, the people who brought them back realize that they have made a mistake. All of the forests around their homes now look like this: 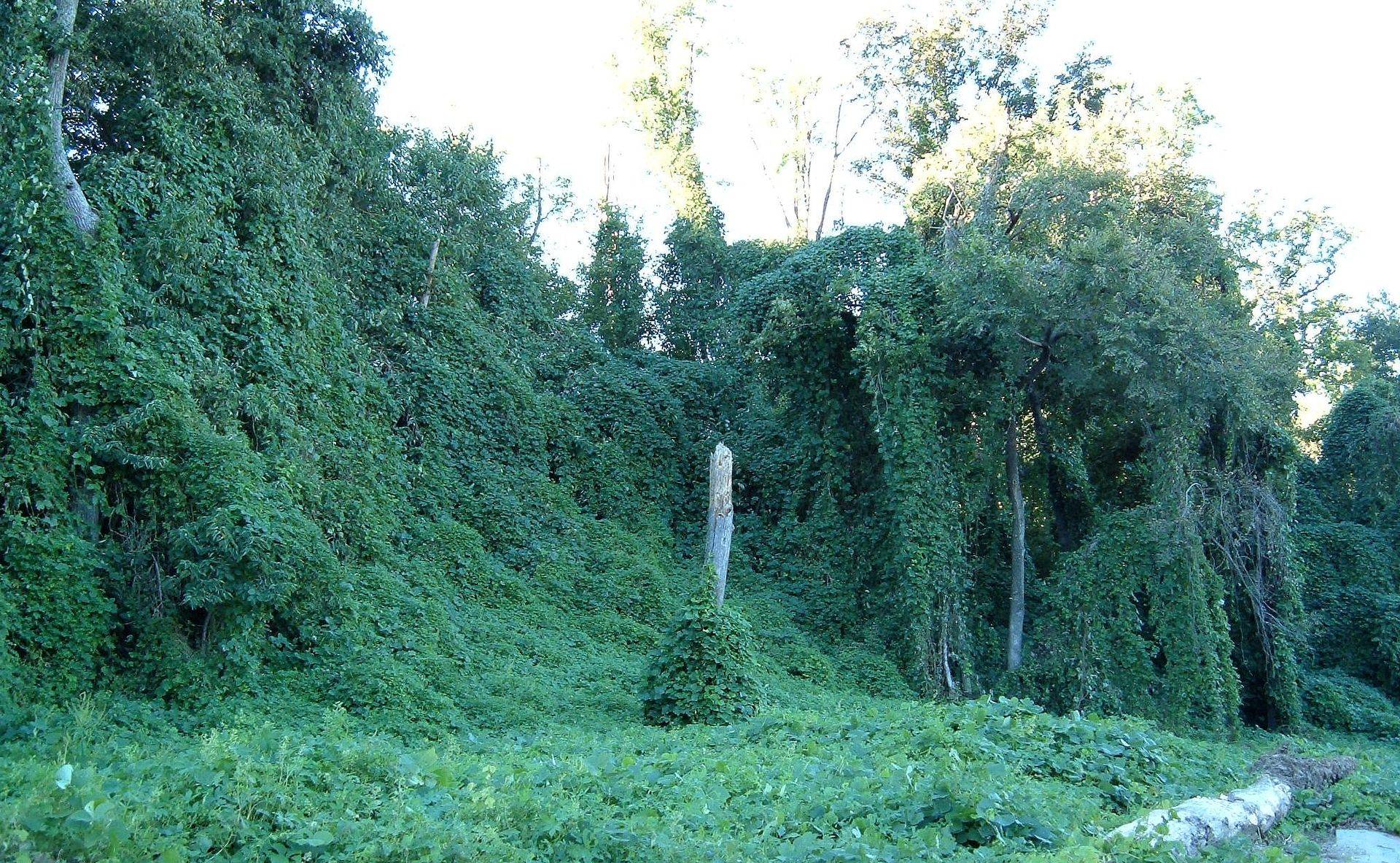 Your beans could likewise be such an invasive species. They've evolved thick, woody, treelike stems because their native environment is too cold and rocky to allow the growth of deep root structures. These stems allow the green bits of the plants to grow back each summer, at the end of which they (normally) die back heavily in the face of a long, cold winter.

Now, due to the deliciousness of these cold weather bean plants, they've been transplanted to somewhere warmer. Of course, in this warmer climate, the beans don't experience any dieback, and starving winter deer don't come along and nibble back all of their new growth after all of the other plants are covered by snow. They grow like it's summer year round, irrespective of what sort of soil there is because they evolved to grow in some of the worst soil on the planet. They also produce beans year round, which made them a great food crop. The beans are tasty, at least, which is good, because now they're about the only thing anyone has to eat.

Rather than basing your experiment off of a plant known for giving good fruit and trying to select for its properties, consider a different approach:

Bamboo isn't much of a plant, but a grass. And not just any grass, but the fastest growing plant in the world. It can grow up to 75cm per day under good conditions, which is insane. (That means it can go from cut to the ground to over your head in less than 3 days. Try keeping up with your lawnmower!)

It makes for an amazing building material (very sturdy stuff, like wood) which is one of the things it's most used for. With the incredible growing speed and its sturdy nature, bamboo is known to be capable of growing through other constructions and plants. So even as it stands, trying to keep it contained is already challenging. A field that can regrow overnight, made of a really tough wood-like material is already a hassle to contain.

But it also flowers. According to the wiki article, the flowering period for a bamboo colony is somewhere between 60 and 130 years. And when it happens, they go big: the entire colony will sprout immense amounts of fruit in a few years time and then die out. And then new bamboo grows from the seeds that were produced.

Now imagine that you manage to get it down from flowering every 60 years to, say, every 5 years by some random lucky mutations. Now you have a forest that grows from nothing to up to 30 meters high in a few months (and regrows in a few more months if you start cutting it down) and every few years there will be a massive bloom of fruit, the entire forest will die (read the article for some of the terrible consequences such as a massive increase in rodents and subsequent famines and diseases) and then next season the forest will grow back and it'll have become substantially larger.

(If the ability to eat it is somehow important to the story, humans can prepare and eat the stems, although that's not the primary use of it)

Fire resistance; fastest way to level a field is to torch it. However that doesn't touch the roots and in the after math the quickest growing plants able to sprout again from just the root (like many grasses) will sprout up first and push out the slower growers.

Other naive methods of trying to eradicate them is cutting it all down. Again a fast growing plant that can sprout from roots will dominate the field quickly after.

For increased unwanted spreading of the plant you can make the seeds survive in the digestive tract and sprout from the droppings of herbivores in the manure pile. They also seem like a tasty additive for cat and dog food though again viable seeds will pass through intact. Local wildlife can also partake in the spread.

Before long local fields, woods and backyards will start sprouting the plant, signaling the start of the burning/chopping and weedkiller.

Most plants that grow foods are herbaceous, meaning that they have supple stems and die each year, but also that they generally grow relatively fast. Herbaceous plants focus their growth on fruit production at the end of each season. Trees have woody, stiff stems, which allows them to grow taller and survive multiple seasons. They generally grow slower. Trees focus on long-term growth and fruit production is not as important.

You're going to need a very specific combination of factors to make this happen.

A specific kind of GMO: a tree that has been designed to have the characteristics of an herbaceous plant like fast growth, but later grow stiffer cell walls to help it stay strong and survive multiple seasons (think of tomato plants - they get very large, but crawl or must be supported).

But, it's going to need to be in the tropical latitudes. Up in the north there just isn't enough sun to facilitate fast plant growth.

Not the answer you're looking for? Browse other questions tagged biology evolution flora food natural-growth or ask your own question.

13
How big should a terrarium be to be self-sustained?
11
Big Green Men… from Earth
6
Could Bamboos Evolve Into Trees In the Past?
7
Can I have a big flying creature with jaw and teeth?
1
A Temperate Deciduous Monster--Too Big?
5
The Galaxy has been colonised but why the big feet?
8
How big could a land-dwelling arthropod get if it wasn’t limited by oxygen consumption?
3
How big could dinosaurs get with super strength and durability?