Is there an element or compound that is highly reactive to any component of milk?

I like to take inspiration for new fantasy creatures from my dreams, so I get some weird ideas sometimes. Last night I found this species. If milk gets on their skin, the creature looks as if it were burned or had acid put on it. Can an explanation be found in chemistry? Is there an element a creature could be made of that is highly reactive to a component of milk? This creature would not be carbon based. Is there any answer not involving food allergies?

"Milk is composed of approximately 87.3 percent water; 3.9 percent milk fats and fatty acids, such as butyric acid 4, caproic acid 6, caprylic acid 8, carpic acid 10 and myristic acid 14; and 8.8 percent nonfat solids, such as proteins, lactose and other immune factors. The minerals that make up 0.65 percent of milk are calcium, phophorus, magnesium, potassium, sodium, zinc, chlorine, iron and many others. Milk is also 0.18 percent acids, such as citric, formic, acetic, lactic and oxalic."

It's a food intolerance

Whether a true allergy (histamine mediated reaction using IgE, IgG, IgA, etc), a metabolic issue (lactose intolerance, celiac disease, etc), or a reaction without a known cause, food intolerance is fairly common in the modern world. Dairy is one of the Big 8 allergens in the US (with similar notations in other countries) and it's a common intolerance in nonallergic ways as well.

Skin issues are quite common with food intolerance. Usually they're from ingestion, but they can certainly come from topical exposures (called Contact Dermatitis). Skin reactions come in endless variety (it's not all hives) and some definitely look like acid burns. 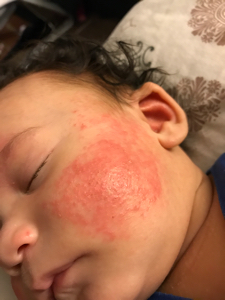 Some allergies are extremely common. Take poison ivy (and oak and sumac). The skin reactions may look like a chemical burn but they're actually a true allergy. One that 80-90% of the human population has. 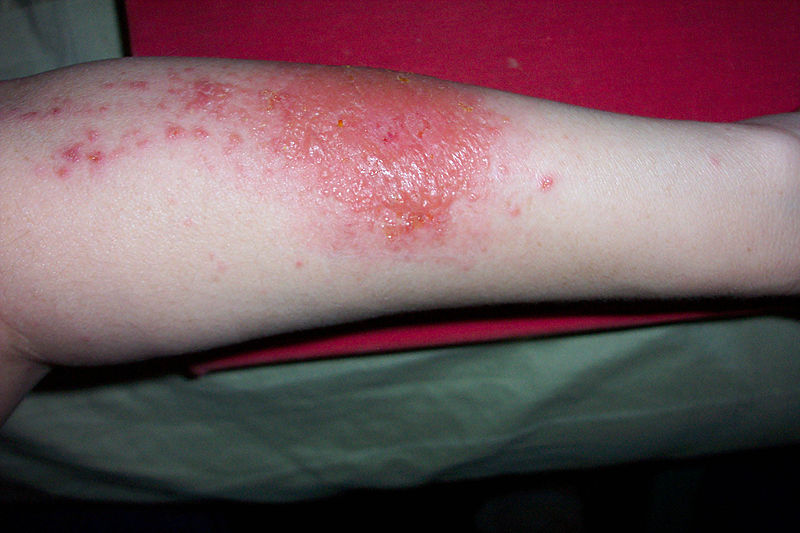 Allergies and other intolerances can be genetic (to a degree...one generally doesn't inherit the individual allergy, just the propensity). And poison ivy shows us that some allergens can be almost universal.

Make your fantasy race near universally allergic to casein, or another component of dairy. Have it manifest like poison ivy.

They might have an apoptotic reaction to myristic aldehyde, which is produced by reduction of myristic acid. The reaction would not be immediate except in the lungs.

However, this means that milk (and also several plants such as, obviously, nutmeg) are a (potentially lethal) vesicant to this creature. Inhaling a few drops of milk might be enough to kill in a particularly horrible way (you can google for "hyprite").

Basically, the creature's DNA-analog engine gets locked by tetradecanoic compounds, similar to what mustard gas and nitrated mustards do to humans. Cells stop reproducing and die.

Given the ubiquity of most milk components, though, I feel that you need some explanation as to how such a creature might have evolved with no defenses against such components. Also, the same components are produced normally by biological processes, so the creature ought to be somehow "alien" to the biology of the milk-producing creatures.

For your non-carbon-based life, there might be a simple chemical reaction occurring. The largest fraction of milk is water, and there are a fairly large class of elements and compounds that react with water.

Alkali metals (lithium, potassium, sodium, etc.) are violently reactive with water, self-igniting from the released energy. Alkaline earth elements (calcium is the most common) will perform the same trick (separating water into oxygen and hydrogen) slowly enough not to ignite the hydrogen, never mind themselves, and unlike the lighter alkali metals, don't float in water. Most other metals to the left of iron in the periodic table are reactive enough to slowly form hydrogen bubbles when immersed in water, though it's far less noticeable with most of them than those in the first column to the right of the alkali metals -- but even these will often burn underwater if once ignited (yes, that includes aluminum, not just magnesium and titanium).

Beyond these highly reactive elements (which are mostly this way in pure form, rather than as common compounds), there are a number of compounds that are highly reactive with water. Calcium oxide, for instance, is commonly known as "quicklime" -- in contact with water, it release a large amount of heat as it reacts to form calcium hydroxide ("slaked lime"). Calcium carbide is even more "fun" -- it also reacts with water to form calcium hydroxide, but in the process releases acetylene gas (high flammable and very stinky). Most metal carbides actually have this reaction, but few of them do it fast enough to be useful (calcium carbide used to be used as fuel in carriage, locomotive, and automobile headlights before electric systems were common in transportation).

So in the end, there are a lot of chemicals of various kinds that can react, vigorously to violently, with a major component of milk. Not sure any of them are something that might occur in the skin of an alternative-chemistry life form, but it's your story...

Not the answer you're looking for? Browse other questions tagged biology chemistry or ask your own question.

1
Are there any other colors to radioluminescence?
3
Are there any elements that wouldn't be useful to a self-replicating machine?
6
Is a long lasting volatile compound that ignites/explodes on contact realistic?
6
Does a compound exist that can phase shift between gas and solid/liquid when electricity is applied?
1
Any poisons that mimic Syphilis?
22
Is there any reason to use tungsten crucibles?
8
Is there any function in society that requires male strength?