Would an exoplanet highly rich in Iron (and other metallic properties) have any effects on technology?

Im working on a story about a new exoplanet discovery and its subsequent "Near Future" colonization.

The planet is close to its parent star. As such, I have decided to give it a sizeable molten iron Core and a super earth radius (for increased Magnetic field production reasons).

But I have also decided to give it a composition mostly comprised of Rocky mantle rich in Iron deposits. As well as a variety of other metallic properties. What effects, if any, would a planet with such a composition have on technology?

The earth changes its magentic polarity every few thousand years or so.

The hypothesized reason is due to internal convection changing the dynamo. Note that earth's core is largely iron and nickel.

Since your planet has a much larger proportion of iron in the core and a much larrger radius, it can be assumed to fluctuate its magnetic polarity much sooner as the opportunity for convection currents will be more, and as iron is more magnetic than nickel (.https://physics.stackexchange.com/questions/318215/nickel-iron-and-cobalt-attraction-strength-to-a-magnet).

How soon will depend on the exact composition, so you can set this as per your convenience. But since this is still a geological phenomenon, and magma has a very high density, so the change in magnetic polarity should not be very frequent. I would suggest to pick a value in the range of 100-200 years.

It also suffices to say that due to large presence of iron, many a surface rock will turn out to be magnetic, with varying strength at different areas.

Given this increased magentism, any solar flare is bound to produce much stronger reaction, which will also be amplified by the short distance between the planet and sun.

So, you can expect

That said, technology is not just for electronic products, but also for biotech, energy, space, nanotech etc, which should not have that profound an impact due to increased iron.

What effects, if any, would a planet with such a composition have on technology?

The fact that it is much closer to the star could be a problem, but you are not asking about that.

No problem there. Are you are probably aware, iron deposits also exist on Earth. There are mining operations to extract the ore: 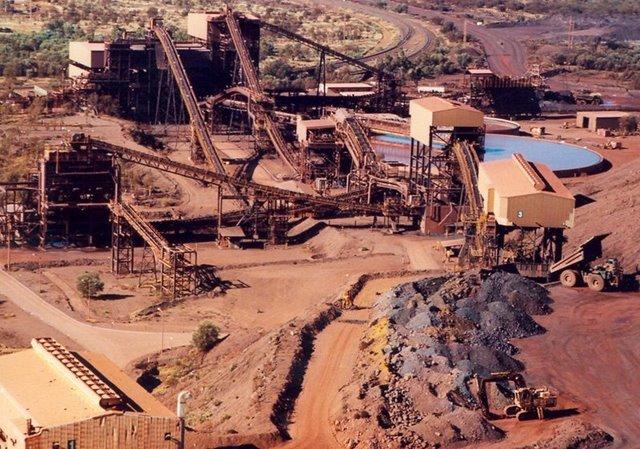 Ore extraction equipment is sophisticated with lots of electronics and wireless communication. It works just fine without any protection from the magnetic field in the ore. Furthermore, as you can see the ore is red. This is because it is composed of hematite: iron oxide, which is not particularly magnetic.

That said, there is a naturally occurring mineral called magnetite, which is a different type of iron oxide. When walking over rocks with magnetite, the worst that can happen is that your compass needle is deflected and does not point to the magnetic north any more.

EDIT1: This answer was given very early and the question was worded in a manner suggesting that OP is interested in how a local civilisations technology might developed.

I would need to know more about the planet to give a comprehensive answer.

However some things can be predicted. I'll assume that the planet is in general richer in metals and not only richer in iron.

I could see metalworking starting earlier, as finding useful quantities of pure metals in nature, think gold and other metals found as nuggets, will make it easier. The fact that ore will be more common will make a start of the bronze age easier. The mediterranean cultures had to get the tin they needed from England or Afghanistan.

Overall such a planet would probably develop technology faster, because there are more easily available resources and it will be easier to develop a periodic table with more known pieces of the puzzle.

Not the answer you're looking for? Browse other questions tagged technology planets geology or ask your own question.

4
What properties would a world need to allow a highly evolved rapidly adaptive species to develop?
29
Why would an alien race have developed space travel and yet not have other technology?
8
Exoplanetary Review: Rock Storms
6
Would complex life evolve on this planet, and could humans survive on it without much outside help?
10
How Might I Design Mountains for My Tidally Locked Planet?
70
Would earthlike planets in other solar systems have well-known Earth gemstones such as rubies, emeralds and sapphires?
10
What is the maximum orbital time for my moon around my planet?
2
Designing a super-comfortable Earth analog
9
How do I give my planet a stronger magnetic field? Playing with variables
6
The Earth and Moon resolidify under a bluer star, their outer layers evaporated and burned away. What do they look like now?