Plausibility and performance of a composite longbow

English Longbows were typically selfbows made of yew, and were pretty effective at what they did, however, I’ve heard before that while composite bows, like the Mongolian, could have less raw power, but were more effective when it came to their power, and allowed relatively longer ranges and stronger shots for smaller poundages.

With that in mind, would it be possible to build a composite longbow, and would they present any significant improvements on the longbow’s performance? And even then, would they be worth their materials and extended labour when compared to a simple composite bow or a longbow?

EDIT - Also, assume late medieval technology and that you can refer to the type(s) of composite bow you find most suited for improving a longbow’s capabilities, whichever these may be. 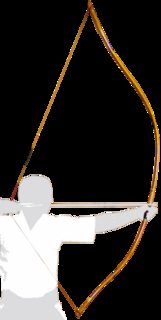 These were made of a composite of bamboo, leather, and other wood and definitely the same length as the longbow. Note, these did not typically use sinew and bone and developed in Japan because bamboo was plentiful, easy to harvest, and cheap as a material but did not do well as single piece construction (like say yew).

These bows were typically just a little under 6 ft. Making them a candidate as a long bow. Made in similar fashion to the Mongol bow (which these were heavily influences on) with sinew, bone, leather, and wood.

From standing position on the ground - none1. The Longbow would be as powerful if not more-so with all the usual trade-offs based on the individual archer, location being used at, and type of armor being used by enemies (heavy armor and Tate).

For use on horse back - you cannot do this with a longbow. The size with the shooting style of an English Longbow makes it unsuitable for horseback whereas one of the primary usages of the Asian model composite bows was horseback archery.

So the real answer to "are there significant improvements" is: it depends.

Fighting in heavily wooded area or any other location where you can get bow snagged easily? Then the Qing bow's slightly smaller size would be worth the reduction in penetration. Fighting armored knights on open fields with plenty of horses available? Then the Yumi could be a better option for "shock" tactics. Other story-based reason - then fit to bow as needed.

1: Draw strength when considered with force distribution in a bow makes the "power" of a Mongol bow similar enough to an English longbow that they are, typically, considered equal in performance. We don't know how they would have done against full plate (when considering arrows) as Attila attacked well before full plate was used on the battlefield in any significant way. 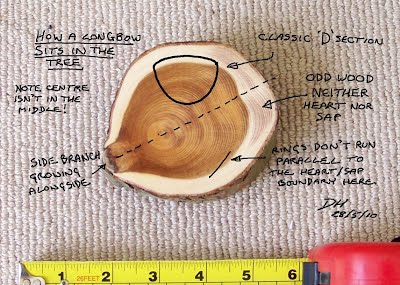 A laminated longbow would then simply do the same by gluing strips of wood together, with the back being made of a wood with good tensile strength and a wood with good compressive strength chosen for the belly of the bow. In the middle ages, this was often done using hickory and lemonwood (with hickory making up the back), but other combinations are possible.

A bow made with modern composite materials would need to follow the same principles, with the layup using materials strong in tension as the back while strong in compression as the belly of the bow. Since even wooden longbows in the late middle ages could have draw weights of over 100 lbs, and required training and strengthening from a young age (archers from that time are often identified by the asymmetric bone density and marks from musculature in their skeletal remains), it would actually be easy to make a bow from modern composites which would be impossible for a normal human to draw. Crossbows with draw weights of over 1000 lbs are possible, but only because a trigger and spanning mechanism are provided.

As I understand it, the composite bow wasn't unknown in England, it simply couldn't stand up to the damp winter weather. The glues available at the time were very limited.

Similarly, bows made from yew would dry out and lose their flexibility in hot, dry climates, where composite bows worked better.

We tend to over-value technology and under-value practicality. Knowledge like this would have spread along trade routes very quickly and been adopted if it was useful.

As the two previous answers were both very good the only other thing is mentioning that most bows evolved with use over many generations. The mongol bow for instance was adapted over hundreds of years into a bow that could be used effectively from horseback or on foot. Due to the mongols need to cover large areas of land quickly the horse was necessary and therefore the bow. The english longbow on the other hand developed from not only the environment but also the available materials. Also they had limited cavalry in comparison to the mongols and therefore no need for a bow that could be used from horseback. The intended target is also an element at play. The long bow was very successful when coupled with a Bodkin arrow when targeting armoured knights while a Broadhead arrow lacked the armour penetration to do much damage to armoured targets.

Not the answer you're looking for? Browse other questions tagged technology warfare weapons medieval .

38
Why would someone carry a traditional longbow instead of compound bow?
4
Making a 1000lb draw longbow
14
Could the development of a body armour that completely stops any small arms fire make a civilization go back to medieval-style combat?
18
How to realistically implement magic-users in medieval warfare?
5
Would height and arms length affect the power and effectivness of a longbow like weapon?
3
Composite armor plates: stainless steel mesh embedded in poly resin
6
Plausibility of implants that hijack our emotions to improve human mental performance
2
Use of fast-burning high-performance solid rocket fuel as gunpowder