Photosynthesis has an abysmal efficiency with regards to converting solar energy into useful fuel for a plant, and I was wondering:

1) If it would be possible to engineer a plant to accept electrical energy as a power source.
2) What the biochemical mechanism for this might be.
3) What upper limits would be imposed on how quickly such plants might grow in comparison to photosynthetic ones given a steady supply of electrical power of appropriate characteristic.

Not a biologist, but IMO plants are most often limited by nutrients, not energy, and that's why efficiency of photosynthesis isn't so crucial. Probably fastest growing plant is Azolla which can double its biomass every two to three days.

There is already a process that we can conduct outside a plant which does something similar to this; it's called electrolysis. In its simplest form, you run an electrical current through water and it divides into its constituent gases; Hydrogen and Oxygen. It's actually an easy way to make rocket fuel out of water.

The important thing to understand here is what photosynthesis and electrolysis have in common; both are endothermic reactions; that is to say, they take energy and store it in a chemical form that allows it to be released by conversion back to lower energy states.

Plants, like animals, draw energy through their metabolism by mixing oxygen and carbohydrates and converting them to water and CO2. These forms take all the same atoms and mix them into molecules that have a lower energy state than molecular oxygen and carbohydrates, and the organism captures the net energy loss of the configuration change, using it for its own purposes. Ultimately, this one way operation is very wasteful over the long term unless there is a process that is also capturing energy in the form of oxygen and carbohydrates, and that is what photosynthesis does; it captures solar energy in a chemical form, effectively creating a store of chemical energy it can use to survive. Because you never know how sunny it's going to be, and because of seasons, and because of thousands of other variables, plants over-produce both oxygen and carbohydrates, filling the air with the excess oxygen that animals can breathe, and tempting us with fruits that contain massive amounts of natural sugars as a tradeoff for distributing their seeds.

Electrolysis is a far simpler chemical process that acts on water directly, but it is also an endothermic reaction insofar as the energy provided by the electricity is 'stored' in the two gases, which when burned together turn back into water and release a massive amount of energy in the process.

The point being, both processes rely on a specific energy source to capture in a chemical form. The real question is whether or not electrolysis could be co-opted in an organic process to produce more complex molecules that include carbon. Theoretically, the answer is of course yes and arguably this could be done my manipulating chlorophyll to work off electrical energy instead of light energy.

All that said; in the real world we already have plants that grow entirely off electrical energy and it doesn't involve any change to their physiology, and the technology that drives this growth is already well known to us; heat lamps. 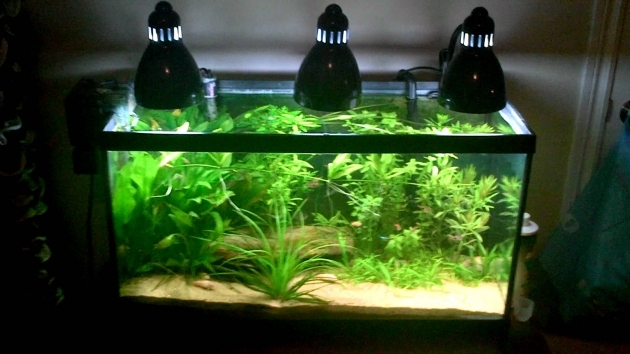 What these do is convert electrical energy to light and heat, which the plants can readily absorb. While outside the spirit of your question, it becomes a simple problem solving matter; either you find a way to convert the plant to absorb electrical energy, or you convert the electrical energy into something that a plant can absorb. Ultimately, you're going to find that electricity is far more versatile than chlorophyll and as such, the simplest option is the latter one.

So, yes; it is theoretically possible to do as you suggest, but the simpler solution is one we already employ, even though it's not as science fiction-ey as converting chlorophyll to absorb electrical energy directly.

Not the answer you're looking for? Browse other questions tagged science-based flora biochemistry electricity .

29
Hydrogenenic Photosynthesis: Strategies for animals
10
How could non-photosynthetic non-chemotrophic autotrophs create usable energy?
14
What would a steam locomotive look like if steam power became yet again the main type used in rail transportation?
8
Weapon design: a conceivable superheated sword capable of cutting through most things
7
Small-scale aviation without fossil fuels
4
Could a world exist without autotrophs, but have heterotrophs?
5
Can electrosynthetic aliens function in this way?