I have a species of early primates (lemur-like but not lemurs) developing into an intelligent species like humans (and yes, there is some influence from an intelligent species, it's not 100% natural if you're thinking it's unlikely). Now, since lemur catta (ring-tailed lemurs) are matriarchal I wanted the society to be too, especially since there is a high degree of difference in colour vision with most males colour blind and most female with trichromacy.

From the time they were hunter-gatherers I assumed females could be the band leaders, standing back and ordering a band of males either to trap larger herbivores while looking out for predators with their better vision Or… well indicating to males which fruits to pick while they do the dirty work of actually carrying stuff. This would have led females to evolve to be taller so they'd see better and males to be lean and agile.

This reflection started with beards but it's also about any secondary sexual characteristics I guess. Which is breasts, beard, etc… so would females grow beards? Or is it necessarily tied to testosterone? Could males do without those secondary characteristics, cause I read (https://www.sbs.com.au/topics/science/humans/article/2016/07/25/ask-evolution-why-do-men-have-beards) that it helped males appear more aggressive.

Getting rid of the lions. Lion males are jerks.

The new matriarchal primates will have a system that is a mix of matrilineal elephants and showy bird males.

Elephants are a matriarchal society; that is, one that is led by a head cow, who presides over her herd of females. Each herd is made up of mothers, daughters, sisters and aunts. They are guided by the oldest and largest female of the herd. This herd sticks closely together, rejoicing at the birth of a calf and mourning at the death of a member.

The herd of females, although maintaining close bonds among themselves, also interacts well with other herds, families, and clans. An average herd of immediate family will comprise of 5 to 15 adult elephants as well as immature males and females...

The male, on the other hand, lives apart from the matriarchal herd, and travels alone or with other males in a bachelor pod. The drift from the herd starts during adolescence, at which time the young bulls start to spend less and less time with the herd. Eventually, the break is made completely. After this distance is established, the bulls will live solitary lives, mingling with the females of the family only for mating purposes

But elephant males are big jerks too, so we will borrow from birds, where the females pick among males who are trying hard to impress them. At mating season, all members of the species get together at the lek. The males show up and compete for mates. They do not fight or bully each other. The males are amazing, colorful and beautiful. They can sing and they can dance and that is what they do. It is the best show ever; something like KCON but with all boys. Reproductive aged females pick the male they like best.

Then the males rest up and drift off, working on their dance moves and songs for next year. Side benefit: the females all get pregnant at once, so they can help each other nurse and raise babies of the same age (borrowed from lions, but it is a very cool thing).

How they look: Females would have a primate body type appropriate for their feeding style, social style and ecosystem. Ground dwelling lemurs and baboons are not so far apart. I would pick baboon-type females because they are durable tough creatures and good for a primate life style.

Male baboons fight a lot and so are robust and have big teeth. Your males are not like that. They do not look much like the females at all. Example: the widowbird. 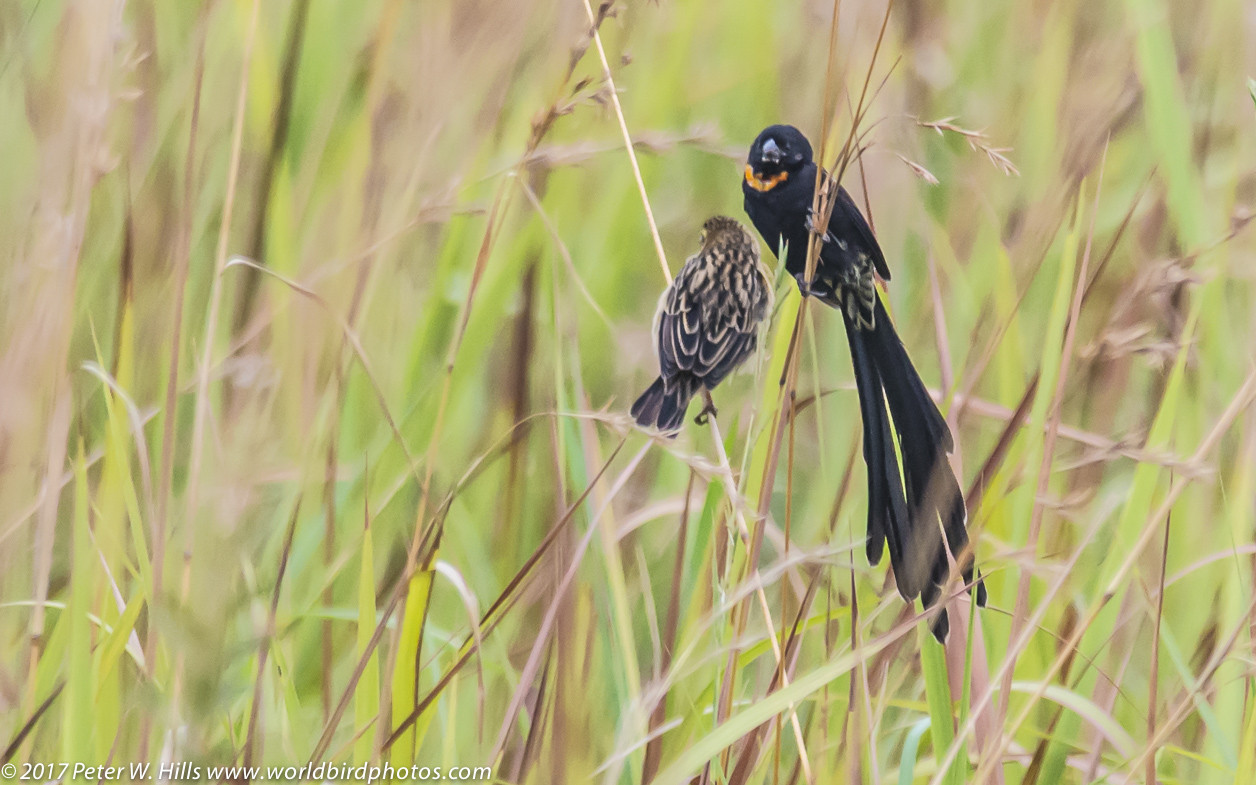 Males are spectacular Kpop stars with huge eyes, perfect teeth, and shiny manes. They have sweet voices and fluid moves. Only the fittest can keep up such appearances while at the same time finding food and fighting off predators, which is why the birds do it that way. Occasionally a young male might not have his lyrics down, or an older one might be a little more stiff in his dance moves but that is how it goes.

Female hyenas have genitals that looks like they belongs to a male.

What humans are concerned, women have wider hips than males because of childbirth. The more narrow hips makes men faster runner than women, so if the hunting requires running, males would probably be the ones who does the running part. Assuming the females of intelligent lemurs have wide hips as well.

Also, babies needs to be breastfed, and so females with babies can be too far away from their children, and running around with them (and while pregnant) would slow them down. Unless the females in a group gives birth at the same time of year, so with several mothers, some could feed the babies of others while they are away. (the male Dayak fruit bats can also produce milk, but is obviously not a primate)

Males are often stronger and bigger than females due to testosterone. Sexual frustration and the competition to mate leads males in many species to fight to get access to the females. And the strongest and angriest ones wins. The bonobos, which have matriarchs, have solved this problem by allowing everyone to have sex with everyone. I think one of the few exceptions are sons and mothers. They no longer have to fight to get sex, and with one of more partners available all the time, there is very little if any sexual frustration in the group. So there is no longer the same selection pressure for the males to be large and strong.

What size are concerned, it depends on how they live. If the females don't have to go out and hunt for themselves, they could be larger and therefore give birth to more children (or at least twins). Maybe there could be dominating females that prevents less dominate females from reproduce through hormones. But to produce more children at once it is a good idea to be larger. So access to sex all the time could make the males smaller, and females who produce more children could make them larger. It all depends on their way of life. If they are nomads that moves fast and efficient from one location to the next or have to run to get away from predators, being big and heavy is no longer a good idea.

Many human cultures (http://mentalfloss.com/article/31274/6-modern-societies-where-women-literally-rule) are matriarchical, with no distinct biological difference from males and females of other cultures (may have physical differences of appearance).

So you can have the lemurs evolve like regular humans.

In fact polygenism (https://en.m.wikipedia.org/wiki/Polygenism) is the theory that humans evolved from different species (of apes), and yet we are all so similar. Similarly, in mythology, there are stories galore of multiple animals standing and convening like humans in good council's etc.

So lemurs can grow up to be like humans as well, as matriarchy is a social phenomenon, not a biological one.

Not the answer you're looking for? Browse other questions tagged biology evolution gender or ask your own question.

41
What could cause an avian species to become intelligent?
15
What would a hexapodal skeleton look like?
26
What would birds look like if they used buoyancy to fight gravity?
8
In what sort of environment might a species with biological wheels evolve, and what would they look like?
36
What sort of world would help prevent an intelligent species from discovering evolution?
3
what would flightless bat like wings look like?
2
How make look feminine and masculine (non mammalian) animal humanoids?
0
What would rotating ears look like on a humanoid species?