How Can I Explain a Giant Equatorial Gash?

I have a moon in my story that has a thin, deep gash or canyon that lies on its equator and spans the entire moon.

My original idea involved the sudden orbital decay of a ring system, caused by a sudden increase in mass from a few small-scale collisions. However, ring systems are invisible or nearly invisible as viewed from the side, which is the view it needs to be. The gash should be faintly visible with the naked eye.

My second idea was that the moon was captured by the planet and went through its ring system, but that causes the same problems as before.

I've done the calculations and the energy released from such small collisions from a ring system would not create craters large enough to be seen from far away.

What are some possible ways to explain this equatorial gash? Good answers will provide scientifically plausible theories of the gash's formation.

I see three ways to go about doing this: Go for something natural, but imperfect, like the Valles Marineris on Mars; cheat by using a small moon not in hydrostatic equilibrium, specifically a contact binary; or go for an artificial surface feature.

Valles Marineris is probably the most visually impressive rift valley in the solar system, being 4,000 km (2,500 mi) long, 200 km (120 mi) wide and up to 7 km (23,000 ft) deep and free of obscuring water or clouds it looks quite impressive. Rift valleys and structures suspected to be rift valleys have been found all over the solar system. Earth, Mars, Venus, Charon, Titania, Ariel, Oberon, Miranda, Tethys, and Luna have such structures.

While the martian Valles Marineris might be the best known and best looking example, 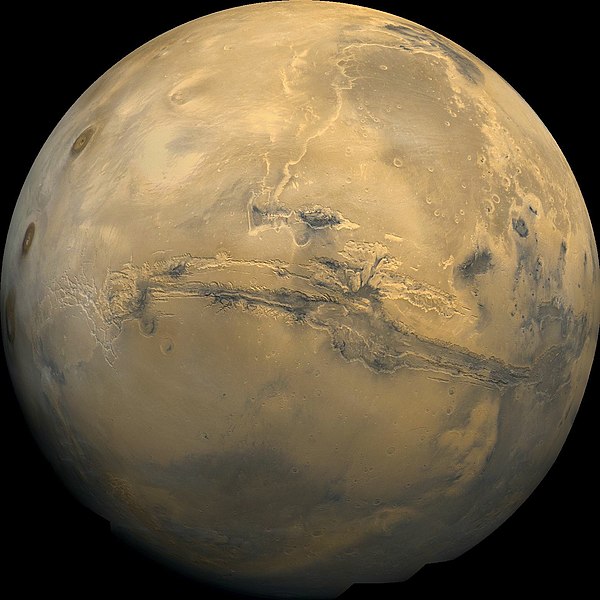 Ithaca Chasma on Thetys might be closest to what you want, as it is up to 100 km wide, 3 to 5 km deep and 2,000 km long and runs approximately three-quarters of the way around Tethys circumference. 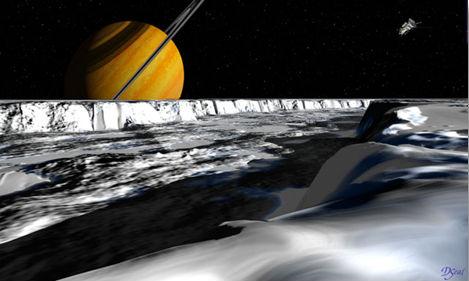 I would also not disregard Eaths mid-ocean-ridges as they too are quite long.

Essentially an object must have a certain mass so gravity can force it into a spherical form. Below this ill-defined limit odd geometries are possible. If you look at the pictures of 2014 MU69 (Ultima Thule), 67P/Churyumov–Gerasimenko or 25143 Itokawa, for example, you'll see examples of contact binaries. Two asteroids which meat each other and came so close that they touched. I imagine the upper plausible size limit for this would be to take 2 metallic asteroid like 16 Psyche with a diameter of roughly 200 km and slap them together. This would be a sizable moon which could be stable over geological timescales. The caveat would be that the gash won't be that much of an obstacle, one could probably jump across it with some effort. Why the gash is equatorial and not polar as it would be in the beginning could bee explained by later impacts. 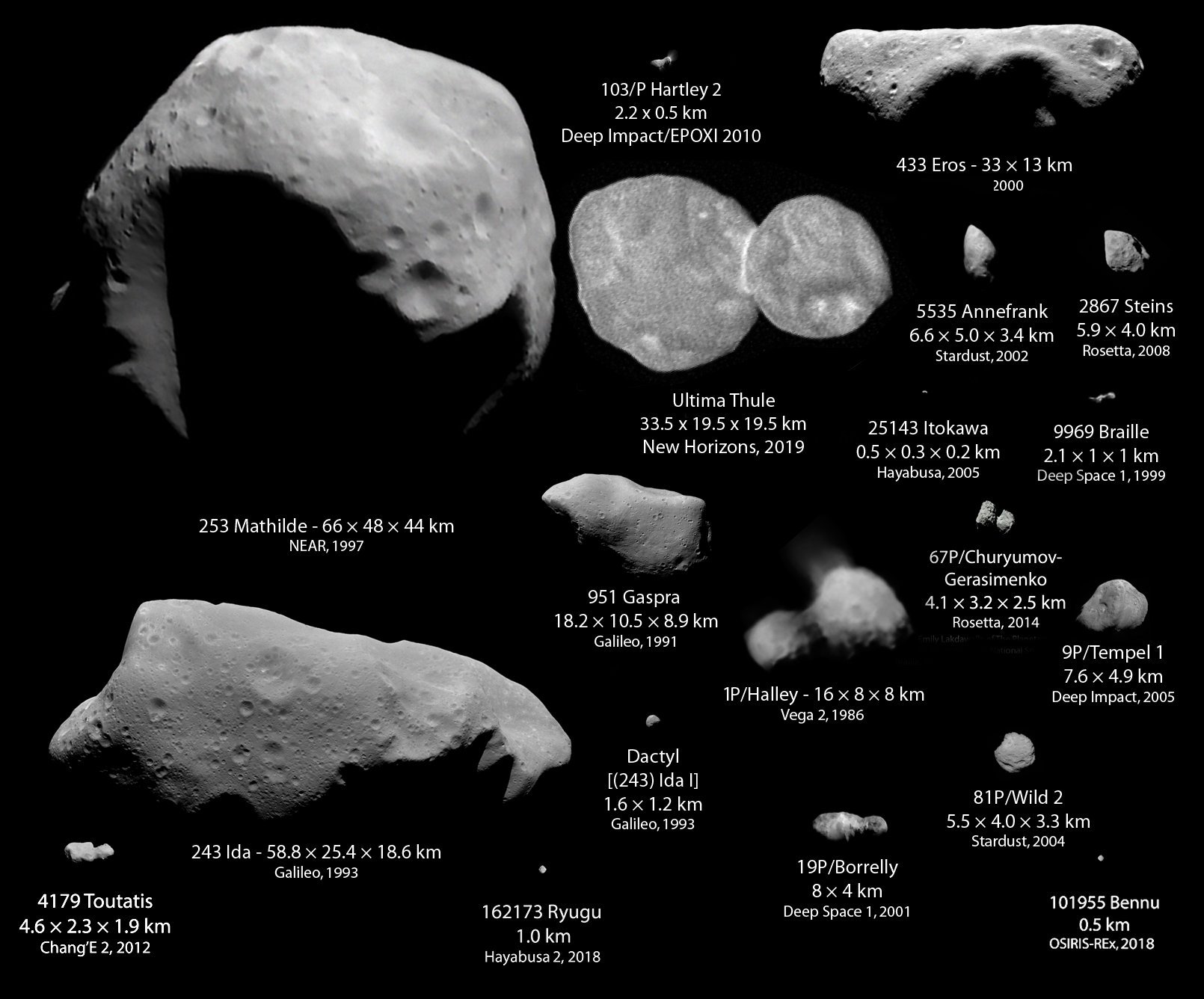 One can get quite creative with reasons why a civilization would create a huge equatorial gash on a moon. Reasons could include

Several hundred years ago, a rogue warlord named Krizakr took his spacecraft to the moon and build a base to use as a staging post for running raids a nearby trading world. Because Krizakr was highly paranoid, he placed several powerful laser satellites in an low equatorial orbit.

Several years later Krizakr's died in a conflict with the Space Protection Fleet and on his starship the coordinates of his base were discovered. The SPF send a small fleet to access the base. It was determined that the armed sattelites were too dangerous to be left active and able to fire upon approaching vessels. Unfortunately they possessed no maneuvering thrusters, and approaching them with personnel was deemed too dangerous until they were disarmed - who knew what booby traps the notorious warlord had installed?

Fortunately they had recovered the firing control codes from Krizakr's ship so the satellites were pointed towards the (uninhabited) moons surface, and fired until their stores of hydrogen fluoride were depleted. With the primary weapons depleted, the satellites were left orbiting the moon, and a buoy was deployed warning passing vessels not to approach the satellites.

If you want craters rather than a single gouge, replace the Chemical Lasers with some sort of bomb or missile.

Rift Fault when the moon was forming

On mars there is the Valles Marineris: ttps://en.wikipedia.org/wiki/Valles_Marineris This is a canyon that is some 4000 km long, is plainly visible, and is roughly east-west. I'm no geologist and the wikipedia page goes a bit past my head, but it seems to have formed when the tectonics of Mars was a bit more active. I see no reason why this couldn't have happened on a moon somewhere.

Something similar to whatever happened to Iapetus. If you don't need to explain it in detail, you can probably hand-wave it as a "mystery the scientists are still unsure about". A giant gash encircling a planet is something likely enough to be feasible and strange enough to puzzle scientists if there's only one of them in the solar system.

If your moon was captured by the planet, it could have been from further away in the orbit, even maybe a rogue (belonging to no stellar system) and had a lot of water that happened to be frozen because it's cold in space (like a comet).

Now when your moon gets too close to the star (either at your planet's orbit or before it was captured, passing nearer your home star, again, like a comet), all the water could have melted and/or evaporated.

Now it's up to you what happens to this water. If you want to say the rock is very porous and liquid water seeped into it and disappeared, that's cool. If you want to say it went up in gas, it probably requires more heat so the closer approach would be more likely, unless you prefer to say this happened before life developed on your planet and at that time the sun was stronger.

The point is, this ice would have acted like the glaciers did during the ice age forming lochs and generally destroying the landscape. You could even say that this used to be the polar region of your moon and this was a polar cap, before it was captured by your planet and a dramatic tilt shift happened. Fast forward a couple thousands (or million) years and through tidal forces your moon ended up being locked to your planet with a spin that wouldn't let you suspect its now-equator was once its pole.

Not the answer you're looking for? Browse other questions tagged planets moons geology worldbuilding-process astrophysics or ask your own question.

8
Creating a Realistic-Looking Rocky Moon
2
Can adding mass to a ringed planet cause a huge chain reaction?

13
Emulating a geocentric planetary system
24
Equatorial icecaps and polar jungles a fantasy or reality?
8
What would the physical properties of this planetary system be?
7
Is it possible for a planetary ring to exist beyond a planet's Rochelimit?
12
Horseshoe Orbits
4
How can I have an Earth-like moon?
2
Can adding mass to a ringed planet cause a huge chain reaction?
1
The major effects on the habitability of exomoons orbiting this Brown Dwarf