How Fast Can A Weightless Human 'Swim' On Air Using Medieval Tech?

This world has gravity, air, and clouds. If humans are weightless yet still has mass, it's gonna take some force to accelerate them. How fast can they move on air, say, if they had fins like divers? By the way everything they wear does have weight. So their clothes are still gonna fall. Only the body doesn't. So if they use tools like diver fins they need to be taken into account. The tools they use doesn't need to be fins, it's just an example. My questions is how fast can they possibly be using any tool. Also the technological level is medieval so no plastic.

Also instead of being weightless what if they can control their weight from normal to zero net force at will? Would it give them a better chance at being faster on air?

If they can change from weighted to weightless at will but retain their inertia, then they will be able to travel extremely fast by becoming weighted, diving to gain speed, then becoming weightless and using that speed to climb higher than they started. Humans free fall at a little over 100 mph, so they would be able to attain this speed in a dive, but over the whole climb/dive cycle a more plausible average speed might be 50 or 60 mph

This mode of transportation is similar to a strategy used by some underwater vehicles, Referred to as https://en.m.wikipedia.org/wiki/Variable-buoyancy_propulsion

If by "weightless" you mean that the net force pulling their body is zero, they are for all practical purposes human-shaped baloons.

There are toys that are just like that: remote-controlled helium-filled balloons with fins. They are more aerodynamic than a person, but given how little viscous and dense air is, the speed for a human air-swimmer should be close to that of the Air Swimmer Shark: 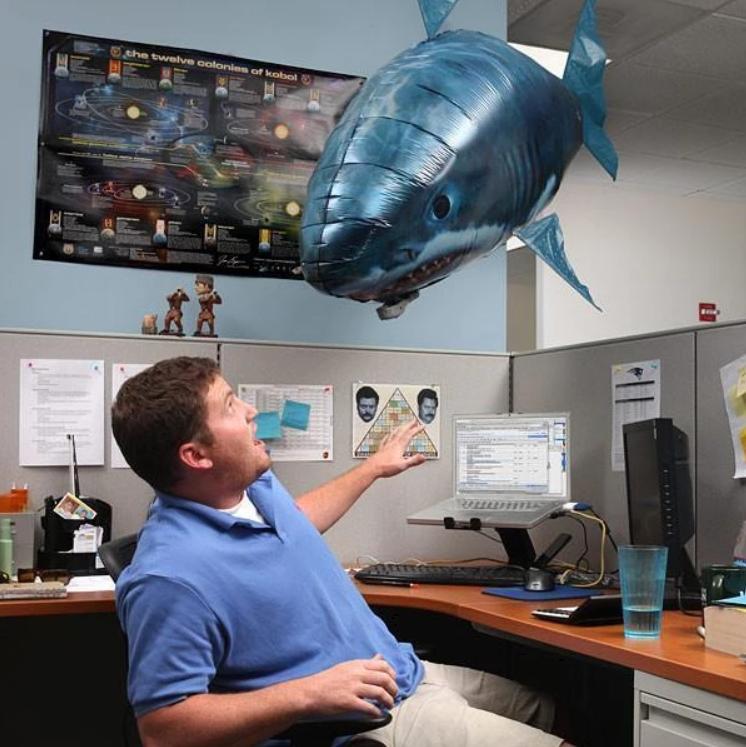 And here is a video of the toy in motion.

If by weightless but still have mass you mean they are light as air, they would also behave like air. In the sense of, they would get thrown around by wind a lot and would have trouble maintaining direction and speed.

If they are NOT as weak as they are light, then they might flail around a bit more rapidly to "swim" around at a decent pace, but again, the moment they stop "swimming" they would stop (or go the same speed and direction as the wind) due to their low mass/inertia. Strapping paddles or wings to their arms would help, but those would also add weight.

Being able to change their weight mid flight could help, but mostly when going down/falling. Unless they fly up while weightless, but having wings strapped to them (as sophisticated as medieval tech can be) and then add weight to glide down (still falling, but with better horizontal distance covered). Tho they might not need to add any weight since their clothes/wings have enough weight.

Expanding from my comment, I think you need to look at punting speeds (especially racing punts).

With Medieval-style tech, I don't think fins are going to be very effective, with the materials they had available they'd be too stiff, too bulky, too inflexible, too floppy, to hard to fasten, too hard to get loose... You may get a couple custom-made curiosities, maybe wood or maybe leather, but they won't be common use. In our own history, swim fins were dreamed about quite early (in the "rare curiosities" stage) for quite some time, but didn't become take off until 1914, possibly due to material advancements.

A better equivalent would be a punting pole. Used on rafts and barges, for shallow waters to give fairly tight maneuverability, these poles would push into the ground, at the shore or under the water, to give momentum. A boat floating in water is probably a fairly close approximation to a person who is weightless but with mass and inertia, floating on the air (especially since clothes and tools weigh down as well, giving a closer approximation to a boat that can ride light or weigh heavily depending on load). A racing punt, built minimalistically for speed, will likely be the nearest equivalent to an unencumbered human.

So, how fast can a racing punt go? No clue, while I found some information on punt racing I didn't find actual speeds. Approximating with other muscle-powered speeds, we've got:

I also looked at bicycling records, since we're ultimately looking for person-in-air speeds rather than boat-in-water speeds. Records seem to go for about 30-35 mph on a bike - though that is literally per hour, there are faster sprint speeds clocked (up to 183 mph, special circumstances apply). For average folk, instead of professional level cyclers, it looks like the speed tops out at about 20 mph.

And skating, since again, human-folk on air instead of boats in water, and muscle powered speed. It's possibly a better equivalent than bicycles since skating is about glide-and-push movement (no mechanical amplifiers like bike chains). In speed-ice-skating-events looks like folk can hit 30mph, maybe as high as 33mph in world-record-level folk. Non-speed-based athletes, like ice hockey players, get to around 20-25 mph. Average folk might get 5-10 mph with inline skates from one person, or 6-10 for the slow and unpracticed end of average and 15-25 for someone practiced and following a known route from another person.

However, both skating and cycling are also a bit less relevant in that they use the strength of the legs and feet, not the arms... I don't think you your folks will have the control or leverage to use their legs and feet for propulsion in your weightless-folk-world for the same reason flippers are not likely - leverage, bulkiness, maneuverability, just, its much harger to imagine just like feet-powered boats are rare and take a certain amount of engineering skill a medieval-tech-level would find very hard. Thus, back we go to punting and other water boat speeds for use of arm-strength, maneuverability requirements, and simple construction and use. And potential drag issues, since I don't know how the weightlessness will translate in that sense.

(as an aside, you might look deeper into this IHPVA group mentioned on the biking records page, its all about the maximums of human-powered vehicles for air, water, or land. might find a better approximation for what you want from them.)

So, synthesizing all that together, I'd guess 6 mph would be a decent casual speed for most people most of the time, including those new or unpracticed, in unfamiliar areas, (casual walking-speed equivalent, is ~3mph I think) and/or if the drag of their air is closer to our water on a human-person. Thus would be going up to perhaps 15-25 mph for someone in good shape and well practiced, in a tearing hurry or on a racetrack, topping out at maybe 30mph for world-record-level dedication.

As an aside, I don't think the weightlessness or any other exotic phenomena in your other world will increase the speed by much, if any. Think of merry-go-rounds, the spinning ones at parks... you can get going quite fast with muscle power, even with a kid's muscles, but the limit isn't how strong you are but how fast you can move, to keep building that momentum. Past a certain point you can't add more force because you've moved past your brace point before you can use it for leverage. And, that kind of speed is also not great for steering, especially when there's the possibility of unexpected obstacles or slowdowns... people will mostly be content with something slower than racing speeds.

Not the answer you're looking for? Browse other questions tagged science-based reality-check technology tools or ask your own question.