How To Make Earth's Oceans as Brackish as Lyr's

Allow me to present Lyr, one of a handful of worlds crafted by artist Chris Wayan: 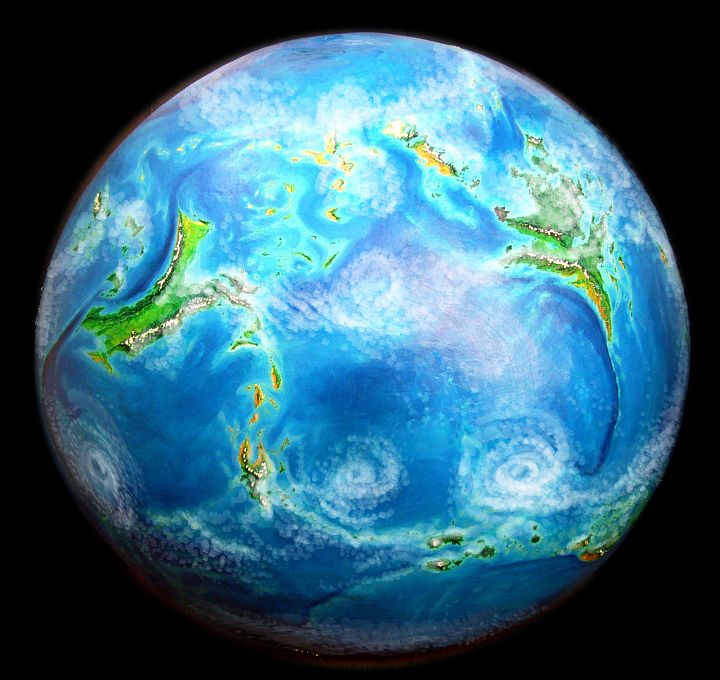 The one detail among a vast many that is important to this question is that its salinity is about 1.5%, roughly half that of Earth. Do you know what that means?

It means that the oceans of Lyr, a habitable planet more than twice the width and seven times the mass of Earth, are brackish.

Lyr serves merely as a model to demonstrate the question more clearly. In an alternate Earth, what must it have to give its oceanic salinity no greater than 1.5%, hence brackish?

It's actually pretty easy. There are two ways to make an ocean less salty. The first way is to remove salt, and the second is to add fresh water, both of which are possible, but takes a lot of effort and won't really occur naturally. But the better question is, what makes an ocean salty in the first place and can we prevent that from happening? And the answer is land causes the ocean to be salty, and yes we can.

The water cycle adds ions from runoff water into the ocean - ions gained from eroded rocks on land, that the rain itself dissolves thanks to its slightly acidic properties. (A quick note - when I say rain is acidic, I'm not referring to modern acid rain, all rain is naturally a bit acidic thanks to CO2 in the air. Modern acid rain has a few extra things.)

To make an alternate Earth that has a less salty ocean, just decrease the land mass. Less land means less ions means less salt, especially given the size of your ocean.

Go back in time

The seas millions and billions of year back were less saltier than today:

In the beginning, the primeval seas were probably only slightly salty. But over time, as rain fell to the Earth and ran over the land, breaking up rocks and transporting their minerals to the ocean, the ocean has become saltier.

At some point, they would have been 1.5% salinity.

All minerals form due to various oxidation reduction reactions that occur naturally, along with physical factors. Altering conditions may help here - reduce the amount of oxygen in air in the composition of atmosphere, reduce the general atmospheric temperature, atmospheric pressure.

Introduce a microorganism that sequesters salt.

Trees and plants sequester carbon: they take in CO2 and build the carbon into their physical structure. Coral sequesters calcium.

What you need is a microorganism that seeks out salt and makes it a part of itself or, even better, builds it into structures like reefs (better because the salt stays locked up after the creature dies). We see algae blooms becoming more common these days as the nutrients to support them fill the oceans. Likewise, these creatures would be always present but flourish when salinity spikes, thus maintaining a 1.5% balance.

The other answers are great. But if we were to assume the same amount of land over the same timeframe with no special salt-gathering creatures, there's a least one other thing that would do it: Start out with a planet composed of less salts. There are of course many salts, some of them compounds, but the majority of salt in the ocean is sodium and chloride. Reduce those two by about 55% and the problem is solved. There may be some complications for life that need these ions, but that amount does not seem disastrous.

Narrow or Dam the straits of Gibraltar

In order to make the sea less salty by geological means, you need to take water out of the sea, evaporate it to dryness, then have it fall as rain.

There is a net inflow of water into the Mediterranean sea through the 14km wide Strait of Gibraltar, and evaporation causes the mediterreanean sea to accumulate salt, making it saltier than the Atlantic Ocean.

This process is however balanced by back-mixing. There is a bidirectional flow through the Strait of Gibraltar: Atlantic water flows into the Mediterranean at the surface, but saltier Mediterranean water flows back into the Atlantic in the deeps, which prevents salt accumulating in the mediterranean too much. The shallowest point of the Strait (a short distance west of the narrowest point)is the Camarinal Sill at 280m deep.

It is theorized that it the past, the Strait of Gibraltar was indeed closed, and the mediterranean dried up, becoming hypersaline as a result, causing the Messinian Salinity Crisis from 5.96 to 5.33 million years ago. This ended when the Strait reopened in Zanclean Flood.

If you can restrict the Strait of Gibraltar such that inflow can occur but backmixing cannot, then the Mediterranean will become more salty and the rest of the worlds oceans will correspondingly reduce.

The chances of the Strait being restricted by just the right amount for the length of time to allow for the mediterranean to be completely filled with salt deposits (rather than simply closing off, drying out and becoming a land depression) naturally are not that high (but see edit!) According to the Wikipedia article there were proposals in the early 20th century to build a hydroelectric dam on the strait. The engineering challenges would be enormous, as would the electric output. There would be major environmental consequences, including climate change in Europe and Africa.

I suppose if you didn't want to build a pressure-withstanding dam, you could just fill the strait with rubble, which might very effectively prevent the backmixing while allowing the inflow. But I can't think of an economic motive for doing this, or a natural process that would achieve the same effect.

How long would this take, and how much salt could be removed?

According to https://www.mathscinotes.com/2015/08/drying-up-the-mediterranean/ it would take 1000 years for the mediterranean to dry up with no inflow. Sea water contains about 35g salt / kg water (about 30:1 by mass) so if the mediterranean were replenished through a Gibraltar Dam instead of being allowed to dry out, the mass of salt in the mediterranean would equal the current mass of water in 30000 years. The density of salt is higher than water, so there would be room for quite a bit more.

EDIT: on rereading the wikipedia article on the Messinian Salinity Crisis, it seems that the straits of Gibraltar opened and closed multiple times during the Messinian period, with the Mediterranean basin drying out and filling up again repeatedly. The estimated salt deposits reached over 1 million cubic kilometres, or about a quarter of the total basin volume, and up to 4x10^18kg by mass (taken together this would imply a density of 4 times that of water for the salt, which is too high, so the actual figure would presumably have been between the two.) Based on the 4x10^18kg figure, this would have caused a drop in salinity in the world's oceans of around 3g salt per kg, or about one 1/11th of current average salinity. Geologists are saying this actually happened.

2
Would the Oceans in This Map Be Freshwater?

10
How could non-photosynthetic non-chemotrophic autotrophs create usable energy?
6
Geography and Appearance of an nitrogen/ammonia planet
11
Under what circumstances would a nuclear war render Earth's oceans uninhabitable?
6
If Earth's Oceans Were as Deep as Europa's
8
The Great Oxidation Event...Artificially Imposed on a Tharn-Like Alternate Earth
2
Would the Oceans in This Map Be Freshwater?
5
How to Terraform a Dead Earth
3
How to Create the Galactic Habitable Zone
0
Would the sort of tectonic activity described below shorten Earth's lifespan?