What could be a plausible scientific explanation for a man with radioactive skin that acts like a nuclear reactor?

A bit outlandish, but here me out: I'm trying to make a villain for my story who's essentially like DC's Fallout in powers. 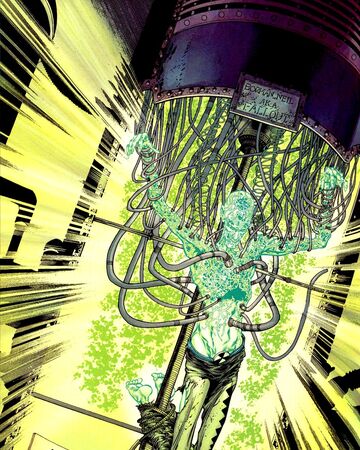 That being said, he would emit high levels of radiation from his body all around him, but still be able to walk, act, and think like a man. He would also need a containment suit to avoid damaging anyone with radiation poisoning. So what are the realist scientific advantages and disadvantages of this concept? How could it work?

He is a robot powered by a fission reactor.

Your character was an Indian astronaut who got into trouble on the far side of the moon. An alien probe was nearby. Realizing that a fellow life form was in trouble (and in trouble as a direct consequence of the activities of the alien explorers) the aliens save him - or save his mind. To save his consciousness, the probe's distant masters uploaded the astronauts consciousness into the probe before his body was destroyed. Now the alien probe is his body. The aliens intended this to be a temporary solution - they figure that when his fellow humans find him, they can put his mind back in a new body and dispose of the probe.

Humans do not have the tech to do that, and so in the probe he stays. Unfortunately this probe was designed for deep space use. It uses a tremendously powerful fission reactor but because it was not going to be around any life forms, it was made with no shielding whatsoever. This also helps with radiant cooling, which is the only cooling available is space. The result is a continuous shower of hard radiation.

This is basically a matter of pulling together the necessary concepts at different levels of scientific plausibility.

Assume your villain is a normal living, breathing, walking, talking, thinking and feeling human being. That's step one.

Steps two and three involves (a) providing a source for the radiation and, (b) a way of protecting a human being from high level radiation.

This suggests something science-fictional, for example, a force-field. OK. Let's assume the villain has a force-field surrounding his body. This only needs to reach a miniscule distance from the surface of his skin.

The force-field will have two functions. Firstly, it draws virtual photons and particles from the quantum vacuum and at the same time prevents from disappearing back into the quantum vacuum. This will have the effect of generating radiation, i.e., he will radiate in all directions perpendicular tot he surface of his force-field. This a variant on the concept of Hawking radiation.

Considering the villain, operating under this concept, will have one small problem. Namely, eating and drinking or even inhaling air. Everything passing through the thin layer of his force-field will be irradiated. So he's eating, drinking and breathing radioactive matter.

Not the answer you're looking for? Browse other questions tagged science-based reality-check super-powers radioactivity or ask your own question.