What are the size limits on an spin-gravity space station?

A spin-gravity space station, a ring-shaped structure that creates a faux gravity on the inside of the ring via inertia, has been depicted as no bigger than a house and as massive as a solar system.

However, I expect there's some real-world limitations on size. With the understanding that any given ring is for human habitation and exactly 1G is the target, what are the minimum and maximum radial size limits?

For minimum, obviously about 2 meters, as that's human height, but I think having your head spinning at the center would make you dizzy, so minimum is probably bigger.

For maximum, theoretical maximum would be whatever radius calculates to 1G with 1C angular velocity. But spinning at near C has obvious practical problems, not to mention the billion or so non time-dilated years it would take just to accelerate up to speed.

I'm looking for real science and mathematics here. I'm hoping answers can be comprehensive enough to include pragmatic human needs, but they can neglect things like material strength.

For minimum, obviously about 2 meters, as that's human height, but I think having your head spinning at the center would make you dizzy, so minimum is probably bigger.

Just lie down? Little centrifuges are useful for counteracting physiological problems with extended stays in microgravity. The major issue is rotation rate rather than radius, and happily people have done various amounts of research on this sort of thing already. This diagram is take from Artificial Gravity and the Effects of Zero Gravity on Humans. 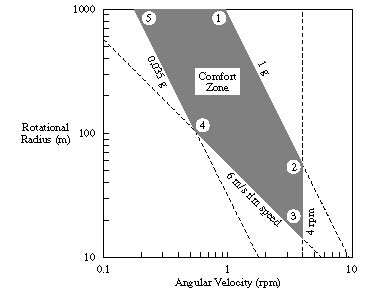 The author of that page suggests that anything under 20m radius probably isn't much fun to live in, but it is hard to do experiments on that sort of thing on earth, so for better research you'll have to wait til humans have a more substantial presence in space. The source materials for the paper don't recommend going as high as 10rpm, but it is apparently possible to acclimatise to rotation rates as high as 23rpm, but again: experimental data is lacking.

Also take a look at this question and its answers.

For maximum, theoretical maximum would be whatever radius calculates to 1G with 1C angular velocity

Well, neglecting relativistic effects (because who has the time to worry about those?) you'd get about $9*10^{12}$km, or nearly one lightyear (worked out using the handy SpinCalc, useful for the lazy). But even if you could make something that big, why would you? It would be a massive pain to heat and light, for a start. I posit that the largest you'd actually want to make a ring-shaped habitat is to fit the habitable zone for a star, Ringworld style.

The original Ringworld, of course, has been well discussed elsewhere. There are some facts and figures here, the key bit being the ~1AU radius so as to neatly fit into the habitable zone of its Sun-like G3Ve star.

I found this slightly clunky and hostile habitable zone calculator. The UI is surprisingly bad, given how simple it is, but I threw in the numbers for Sirius A (25.4 times the luminosity of the sun, surface temperature 9940K) and got habitable zone figures of around 6AU. That's about $9*10^8$km, and throwing that radius into SpinCalc gets you a tangential velocity of about 3000km/s, or about 1% of lightspeed which is still comfortably below the point at which you need to worry about relativistic effects. I'll leave it to you to pick a star with a truly silly luminosity and work out how big a ringworld you'd need around it, though.

Constructing such a ridiculous thing (which, with Ringworld's width of 1.6 million km, has a surface area of something like 17 million earths) is left as an exercise for the reader. Even finding enough material to give it a light dusting of soil is going to be quite a challenge, but maybe you can dismantle Sirius B to help you make it?

If you allow for realistic material constraints, everything becomes massively smaller, though still absolutely gigantic by any reasonable standard.

Thomas McKendree wrote a paper a while back called Implications of Molecular Nanotechnology Technical Performance Parameters on Previously Defined Space System Architectures, and applied it to the classic O'Neill cylinder. He came up with a habitat with radius 461km and length 4610km, giving a habitable surface area of about a million square kilometres (remember half the area of an O'Neill is given over to windows). The Orion's Arm universe uses slightly less conservative estimates of the performance of carbon nanotubes, and gets a somewhat larger habitat, 1000km in radius and 10000km long. Close to the limits of materials, but not quite beyond the realms of possibility.

I think @StarfishPrime 's answer already covers almost everything relevant, however he seems douptfull that the one lightyear ringworld could be constructed. This isn't rally an answer but an extend comment about the 1 lightyear ringworld.

I'm under no illusions that building such a mega(giga? terra?)-structure is easy or trivial. Even though what I'll propose is physically possible, the engeneering, logistics, heating and lighting issues and those arising from friction or induced currents will be enormous. This is a project even a galaxy-spanning K3 civilisation will consider impressive and non-trivial. This is precisely the reason why I believe someone will attempt it in the distant future.

With that all out of the way, let's bring in the

Whenever you build a structure you want it to stay stable. Buildings do this by relying on passive support, i.e. their own structure can carry their weight. This approach is limited by the ability of the building materials to resist the force the rest of the structure exerts on them. This is Newtons third law, actio = reactio. Actio is the force the structures weight delivers and reactio is usually the force the material must be able to muster. No imaginable material comes even close to having the tensile strength required for such a megastructure.

But nowhere it is said that the reactive force must be provided passively to keep the structure stable. Imagine a friend of yours is walking over a thin plank, which would break under his weight. The passive support of the plank isn't sufficient to counteract the force your friend exerts. Now you go under the plank and push it up, so that it can hold your friends weight. You are providing active support. The great thing about active support is that you aren't limited by puny compressive or tensile strength, you are dumping energy into the system to keep it stable. And you can dump infinite ammounts of energy into a system.

Or to put it into simple terms, the ring will fly apart, no matter what we do. So we have to hold it together from the outside by providing a strong enough inwards acting force.

So now we got two issues at hand. Firstly how do we get a force strong enough to hold the ring together and secondly how do we prevent friction between the ring and its support structure from vaporising everything. After all, the ring is supposed to move near lightspeed.

The support issue can be taken care of by placing the structure around an object with a hill-sphere with a radius significantly greater that 0.5 lightyears. We also don't want any other objects in the neighbourhood (read several lightyear radius) which could disturb the structure gravitationally. The central structure should be a sufficiently massive black hole. We want a black hole for two reasons. Firstly it is simply less dangerous than a star with the requiremened mass (those O and Wolf-Ratet stars will go supernova very quickly) and secondly it will be our energy source. Black holes are amazing for energy generation and we'll just need some hydrogen to use the Penrose Process or harvest light from the accretion disc and we'll be set with energy for billions of years. The superstructure supporting the ring will mostly consist of hydrogen. It will be a gigantic storage tank full of it which is as big as the ringworld. You construct both ring and superstructure in orbit around the black hole. Then you install mind-bogglingly powerful electromagnets between the ring and the superstructure. (There will be induction issues, however I think engineers in a K3 civilisation might find a way to negate those.) The next step is to accelerate the ring up to lights peed and the supportstructure well below orbital velocity, but not to a complete standstill. One would have to plan the mass ratios of the two parts in a manner that the force of gravity pulling the superstructure down to the black hole is equal to the force with which the rings wants to fly apart. The magnets ensure that there is almost no friction and that both components keep interacting.

So here you go, this is a perfectly non-conservatively sized spin habitat.

Not the answer you're looking for? Browse other questions tagged science-based orbital-mechanics dyson-ring or ask your own question.

24
What minimal radius is needed for rotation to simulate gravitation without adverse effects on humans?

24
What minimal radius is needed for rotation to simulate gravitation without adverse effects on humans?
58
How would someone hide an asteroid in the void of space so only they could find it?
5
What are the limits of superatom engineering?
14
Is my Solar System scientifcally possible?
10
What is the maximum orbital time for my moon around my planet?
3
Feasible star + planet + moon combo? Did I miss anything that makes this system wildly unstable or otherwise impossible?
17
Is a coral-based planet possible?
7
What are the Limits of Laser Weapons in Space?
11
Hurricane-force winds or gentle breezes in an O'Neill Cylinder?