Ancient gods return to earth in 2001. How does it affect the following 30 years? [closed]

In August 2001, the Greek, Norse, and Egyptian pantheons return to earth and create "realms", areas where technology does not work, and magic does. The areas are marked on this map: 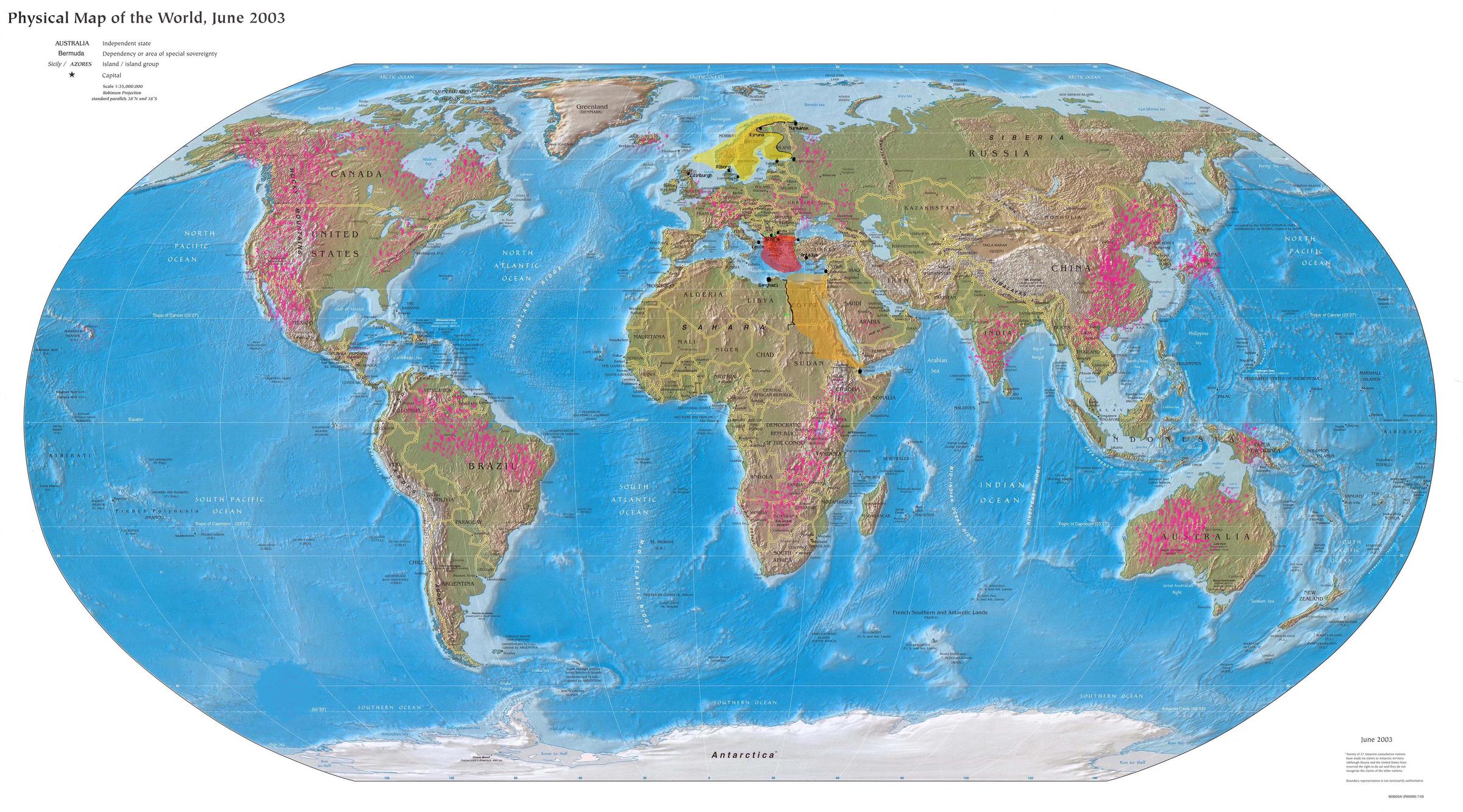 This throws the world into upheaval, and I'm trying to figure out a way to make a believable culture in the year 2025.

Gods are nearly immortal in the realms, and engage in press-gang tactics to bring humans who venture into them into line with their own agendas. That said, magic does not work outside realms; gods can be harmed or killed outside of them.

Some things I'd like to try and keep, if possible:

If you have any questions, just ask! I'm sure I missed a bunch.

EDIT 1: In response to some questions.

The Gods want followers, because followers determines power, and they need to be able to compete with the other gods. Basically the gods themselves are their own level of politics and border wars.

Hope this helps, and thanks for the warm welcome!

Here's a couple of consequences I foresee:

The most co-operative god dominates, and very interesting things happen at the boundaries of these realms.

Basically it sounds like you have zones with different laws of physics, and while mythological magic can be self-consistent and balanced within their zones, if you have something very different a mile away, then you can do very cool stuff and take advantage of both the benefits of magic and of technology. For example, you could use magic to produce a high pressure jet of water, which then crosses a boundary into normal space and then drives a power station. Result: free energy! In turn, modern tech can offer advancements like good healthcare that aren't available in mythology. Stuff like good metal that ancient heroes had to quest for, you can import by the truckload. For warmaking against other realms, you can fit magic warheads onto ICBMs. Oh sure, the missiles stop working at a certain altitude, but the warheads still do...

Not every god would be wise enough to see how this would work, but there are certainly those with a history of working with mortals, or at least who want to disrupt the status quo. Loki, Athena and Hephestus would be some of the most likely candidates to prosper in this new world.

In military fields, the technological societies would place a greater emphasis on researching things like kinetic energy weapons (railguns &c), in an effort to find something that can reliably score kills on targets inside a god's realm from outside. There would be fewer drones, cruise missiles, fighters and other weapons that rely on continuously-active electronics in play, because most militaries around the world would be less able to afford to deploy multiple styles of weapon technology at once. This wouldn't be a blanket thing, and the biggest powers would still have the full range of weapons available (nuclear weapons might even work through the field, who knows?).

As soon as word got out about any successful tests of rock-dropping technology, the gods would also likely develop a magic-powered railgun equivalent in order to maintain their standoff. Depending on how much they can violate physical laws, they could probably retain the upper hand (oooh, a US Navy railgun can drop twenty-kilo tungsten rods on us? How cute, here's ten thousand tons of granite), but as long as they themselves remain killable, this wouldn't necessarily degenerate into a shooting war (at least, after the first rogue god gets sniped, at the cost of a few dozen human ships, and the others calm down), just a new flavour of cold.

One possible political consequence of a cold war: as soon as there's any hint that humans can break or question the hegemony of any given King of the Gods for a region, the gods within that region would split into multiple factions more concerned with each other than with the human realm outside their sphere of influence. e.g. the Titans would try to manipulate Zeus into a position of conflict with one or more major human military; the Vanir might break alignment with the Aesir and instead join the EU, because of their preference for peaceful applications of power, etc. Half of the gods of any given region would likely want to work with humans on peaceful technology, in the hope of toppling their dictatorial overlord.

Not the answer you're looking for? Browse other questions tagged society alternate-worlds or ask your own question.

41
How does Santa keep the elves from revolting?
14
What happens to “Freedom of Religion” when Gods can affect the world?
16
How would magic affect the subjects taught in school?
2
How can the longevity of elves affect family structure?
6
All hail the sun disk! How to maximize ancient Egypt's acceptance of Ahkenaten's religion?