Could time travelling be a realistic means of travelling great distances?

The fastest thing that travels (as we know it) is light. But there are distances in our universes that even time takes billions of years to reach. So traveling at the speed of light is simply not enough. So, assuming that time traveling has been invented, what if we set out towards our destination (assuming that we know of a place where we can reach and can run some personal errands) and time travel a billions light-years ahead so that we can skip the journey time and be there. What are the possible arguments that prove that this is not possible?

reality-check time-travel
Share
Improve this question
edited May 4 '15 at 8:01

Assuming time travel and teleportation are possible, the scenario you mention is also possible.

First, let me note: a light-year is not a measure of time but of distance: it is the distance light can travel in a year, approximately $ 9.4608 \times 10^{12} \text{ km} $. If you're travelling at the speed of light, the relevant unit of time that it takes to cover this distance is just a year.

However, if you have teleportation, I will argue that time travel is unnecessary - instead, you can just teleport yourself to your destination.

Time travel is not necessary.

The answer is because of time dilation. As the speed of the craft approaches the speed of light, to the outsider at the source or the destination the ship can travel no faster than the speed of light. However, to a passenger on the ship, the subjective experience of time is shortened. Thus the time elapsed for them during the journey can be made arbitrarily short, by traveling closer and closer to the speed of light. Of course the universe may look very different when they arrive.

Also, the space travel in the Ursula LeGuin's sci-fi books works like this.

If, however, you mean you want to get there FTL in the frame of reference of the outside observer, then, yes, time traveling at the end of the journey would work. Your example actually illustrates the close connection between FTL and time travel according to our current understanding of relativity.

In addition to the other answers, you could consider the following.

If you time-travel but stay in one place, even going a day forward in time, you will find the Earth has traveled FAR and you're in outer space. The Earth, solar system, indeed galaxy - are all traveling remarkably fast from each other and with each other.

If your characters could get the extremely detailed precision of predicting when a destination will be in your place in space, you may jump forward, undertake what you need, and then jump backwards to home. But you don't get to pick any destination, just one that will be flying by your point of space at some point in time.

It's true that by traveling at nearly lightspeed, time dilation will result in the trip taking very little subjective time for the traveler. (At lightspeed, in fact, time ceases to flow, an interesting phenomenon enjoyed only by photons.)

The downside of traveling at, say, 0.999c is the horrific amount of energy needed to accelerate you to such a velocity (and an equally horrific amount of energy to decelerate at the destination). And even if you had the energy of a small star at your disposal, the amount of time needed to get to cruising speed, at an acceleration that won't reduce you to a puddle of salt water and sediment, is measured in millennia. (This, too, has to be doubled if you want to decelarate at the end of the trip.)

I just had a thought: if you can choose a reference frame that is extreme in making "your space" into "my time", then time travel will translate into spqce travel, directly. That sort of thing happens near black holes. 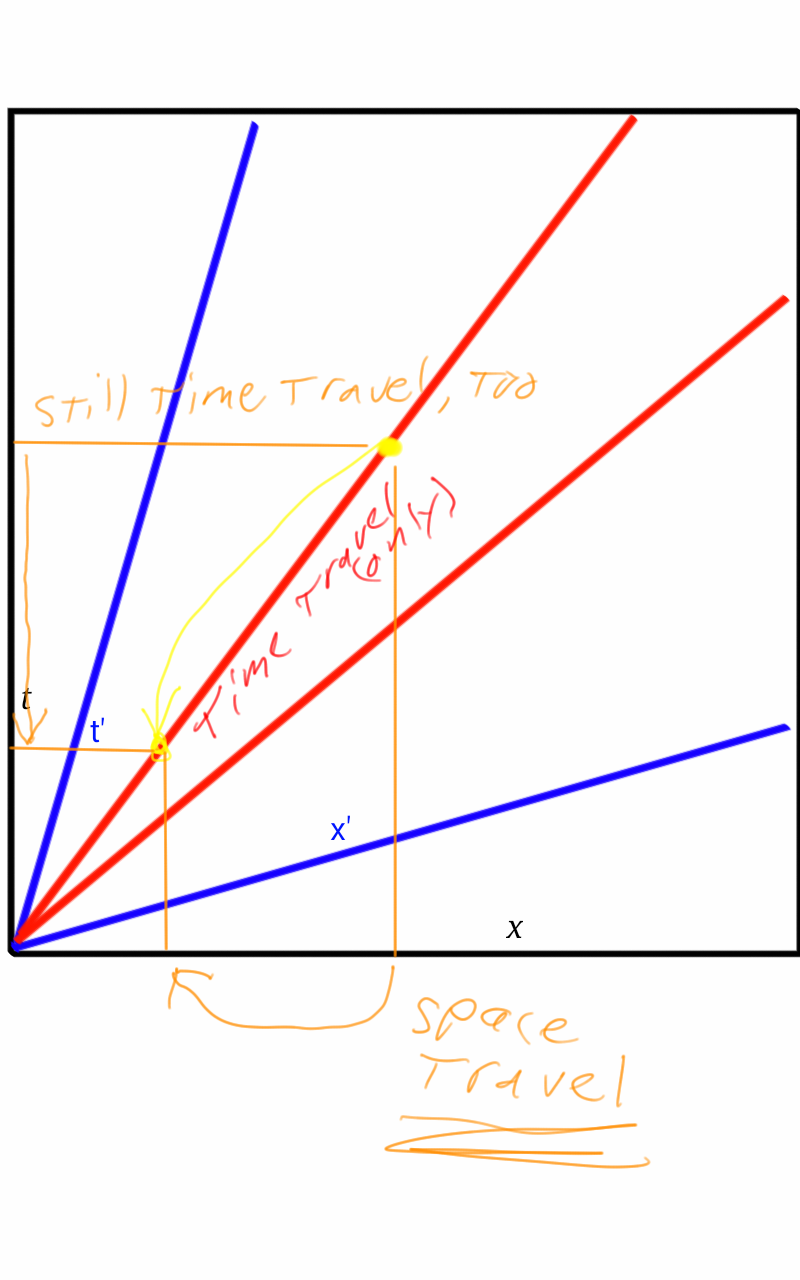 Blue is a different reference frame than black, on a s-t diagram. Then I added red to be even more extreme: the time axis approaches a 45° angle. On this relativistic moving ship, he jumps back in time.

From the rest frame, he jumped back quite a bit less in time and also jumped backward (along his direction of travel) in space.

That makes sense: he returned to an earler point on his world-line, which occupied a different place (from our point of view). He was there the when he existed at that time, and will be there again when he revisits it.

But, it works with the projected (current) motion even if he returns to a time before he adoped that velocity. You would have to, otherwise the position is already occupied by your previous self.

Other's have covered this nicely except for one point I wanted to make clear.

According to our current understanding the physics of our Universe, if you have FTL travel, you necessarily also have time travel.

It seems to me that it also makes the reverse true too.

Not the answer you're looking for? Browse other questions tagged reality-check time-travel or ask your own question.

26
Temporal Ethics for bidirectional time-travel with branching time-lines
0
“Tachyonic precurors” as an early warning system
2
Travel (how far?) into the future using a black hole and light-speed space craft?
3
Will This Violate Causality?
5
(Please Someone Explain) Is time travel using wormhole as portals possible logically?
3
How does a time travel paradox actually begins?
24
Is it possible to bind multiple ships together on open water?
15
How can I allow bidirectional time travel in a deterministic block universe?