How would a village use its river that it shares with another village downstream?

This question is for a fantasy story loosely based on medieval west Europe.

The story is centered around a small remote village in a mountain that sits by a river. The village uses its river for drinking, bathing in, running its mill(s), etc. It would probably dump some wastes in it as well, but this got me concerned: what about those who would use the water further downstream?

I do have a settlement that sits on a flatland below the village mentioned above. For starters, is it realistic that two settlements would share a river at all, since the settlement downstream may be concerned about what might flow down from upstream? Or would some medieval wastes not matter much as long as the two settlements are far enough apart? Would there be agreements between the two settlements on what can be thrown in the river and what can't?

Also for that matter, what about bathing? We know that, contrary to popular belief, medieval people did try to keep themselves clean. Would people downstream complain about body residues and soapy water?

It'd be great if an answer can address how things happened back then, and also in present day where contamination is a bigger concern and things like spread of diseases by water is better known.

Also note: "the village upstream doesn't need to care if no one has a strong enough political power to have a say about it" is not an answer I can accept, even if that was true for medieval Europe.

It would use the heck out of that river.

Cities have always shared rivers. Rivers are long and they have the things people need. A river is an excellent place to site a city. Look at all the cities on the Mississippi River and its tributaries. 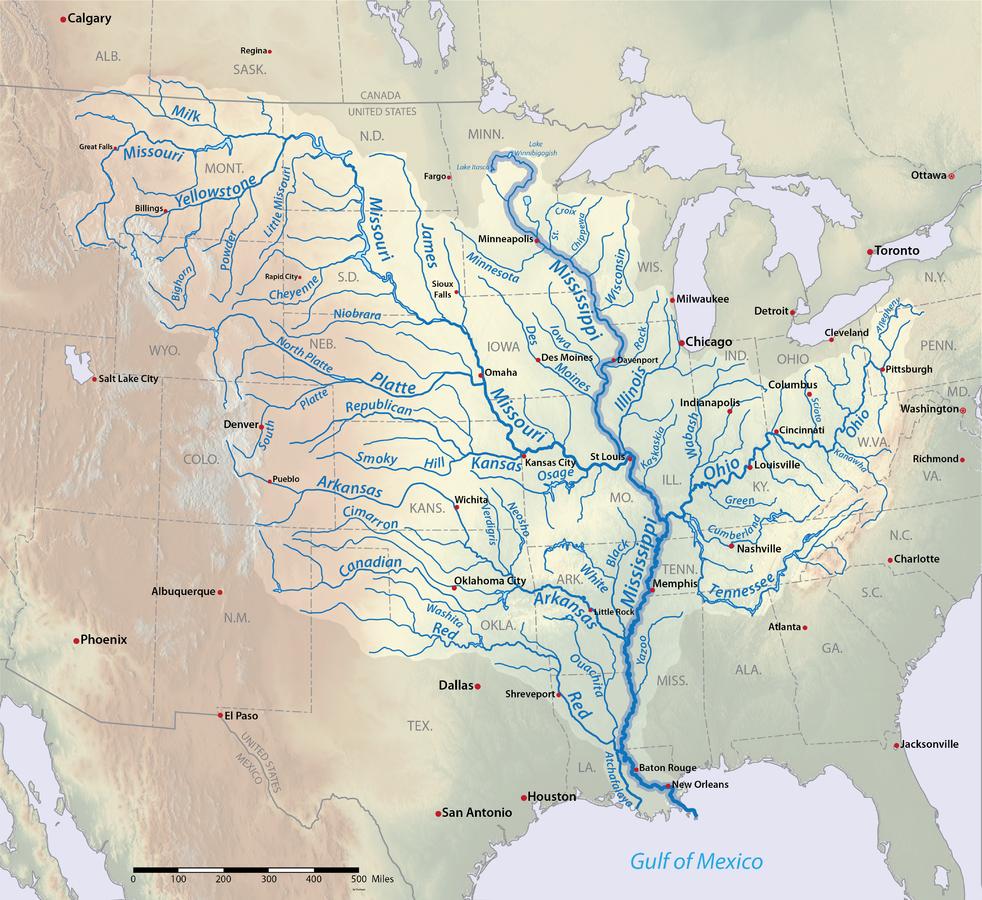 Moving water, air and life can do a lot to clean up the effluent of a city especially if it just biological waste and not industrial waste. The people downstream can and do wryly joke that their water tastes like the poop from people upstream. Unless you are in Memphis and they will brag that their water is not St Louis flavored because they have deep wells.

Disease could and did travel down rivers; cholera epidemics moved along the Mississippi 180 years ago and cholera still travels along rivers. Getting angry at people upriver because they are dying of cholera does not seem like a winning strategy.

The thing that does historically get people upset is if you divert too much of the water and leave too little for those downstream. That sort of battle goes on to this day; between Georgia and Florida, for example. Invariably large scale use of water is for agriculture. The amount your remote village would need for its orchards will probably not make a dent.

It would probably dump some wastes in it as well, but this got me concerned: what about those who would use the water further downstream?

What!? Dumping our precious waste in the river? Who would be so ignorant to do such a thing?

Solid waste is useful. Food scraps feed animals (specially pigs and goats). Human and animal excrement works as a fertilizer. Unrepairable clothes can be converted to rags, and rags can be burned to provide some heat when needed. Same with broken wooden objects. And a river would not carry broken ceramic objects, as they are too dense. There are few other solids available to dump in a medieval village.

Urine is also useful for bleaching and tanning. In any case it is less of an issue. Being it mostly water, people can just pee wherever they feel the need with no side effects. And even if for some reason you convinced all the people upstream to pour down their piss in the river (which means a serious restriction at a time when most people would need to go walking to the river to do so), you need a lot of it to affect the water downstream.

Which reminds us -if we ignore the above points- of the logistical issue: medieval villagers are not working in an office building with nice plumbing that sends their feces to the river. They are tending the fields, or the house, and can be a considerable distance away from the river. Why on Earth would they want to spend one or two hours a day walking to and from the river just to take a dump, when they can just do it at the field, cover the excrement with a little of soil, and keep working?

And of course, since everybody knows that illness is caused by miasmas and bad humours, there is nothing to worry about all those people upstream casually using our river. Nothing at all to worry about.

A Roman engineering solution to the contamination problem would be to build an aqueduct that draws water from upstream of all villages and runs parallel to the natural stream.

A set of weirs at the aqueduct entrance would balance the flow between the man-made and natural streams.

In the past, some works were very polluting, and usually caused a lot of hatred in the villages downstream. Tannery, pork meat processing, dyeing used to leave a lot of substances in the waters. Other activities (such as bathing) didn't pollute the rivers in perceptible way (at least, not according to the standards of the period), particularly if the town is small (as your mountain town seems to be).

However, in the worst case, the town downstream could give some incentives (lower tariffs or duties) to all of the most polluting activities so that they would move to that town.

We handle it today by purifying the water before putting it back into the river.

This is still possible in medieval times. No one did it but there is no reason you can't build a sewage treatment facility. Most of it is just separating out solids and giving anything in it enough time to breakdown. You may be interesting in something called biological wastewater treatment, which is more about giving biology enough time to break things down. Settling ponds are used to sperate out solids which can used for fertilizer (just not for food crops, fine for things like textiles or oils), then you use retaining ponds and keep stirring the sewage to aerate it so bacteria and microorganisms can break it down. Shellfish, filter feeders, and plants love this kind of liquid discharge, some places build artificial wetlands(swamps) to help breakdown this waste without using chemicals. The final stages is just using sand and soil to filter out anything that is left.

Today we use pumps and machines for this since it is easier but you can do it without them, you just need good design (so everything is gravity fed) and a few extra settling ponds so you can drain and dig them out occasionally. 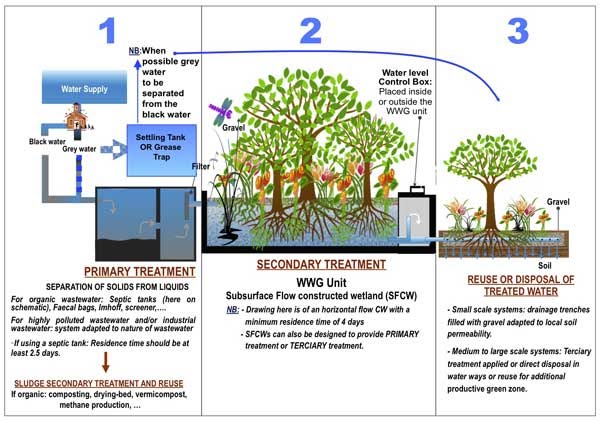 The brief answer is - in most cases they would historically have not cared - either at the source of the pollution or downstream.

Up until the present day people will (apparently) happily both

Villages will have defecation areas near lake sides a short distance from where water is drawn for drinking and cooking and other domestic purposes.

I have seen many examples.
One only as a photo is easily findable.
More if desired.

Here the cows are being washed, after a fashion, after being milked.
Then they come and drink from the trough.
As I watched a dark red stain spread along the trough - I did not see the source but presumably a cow was bleeding heavily into the water.
Then men came and performed personal ablutions, washing in the trough and baling water over themselves. 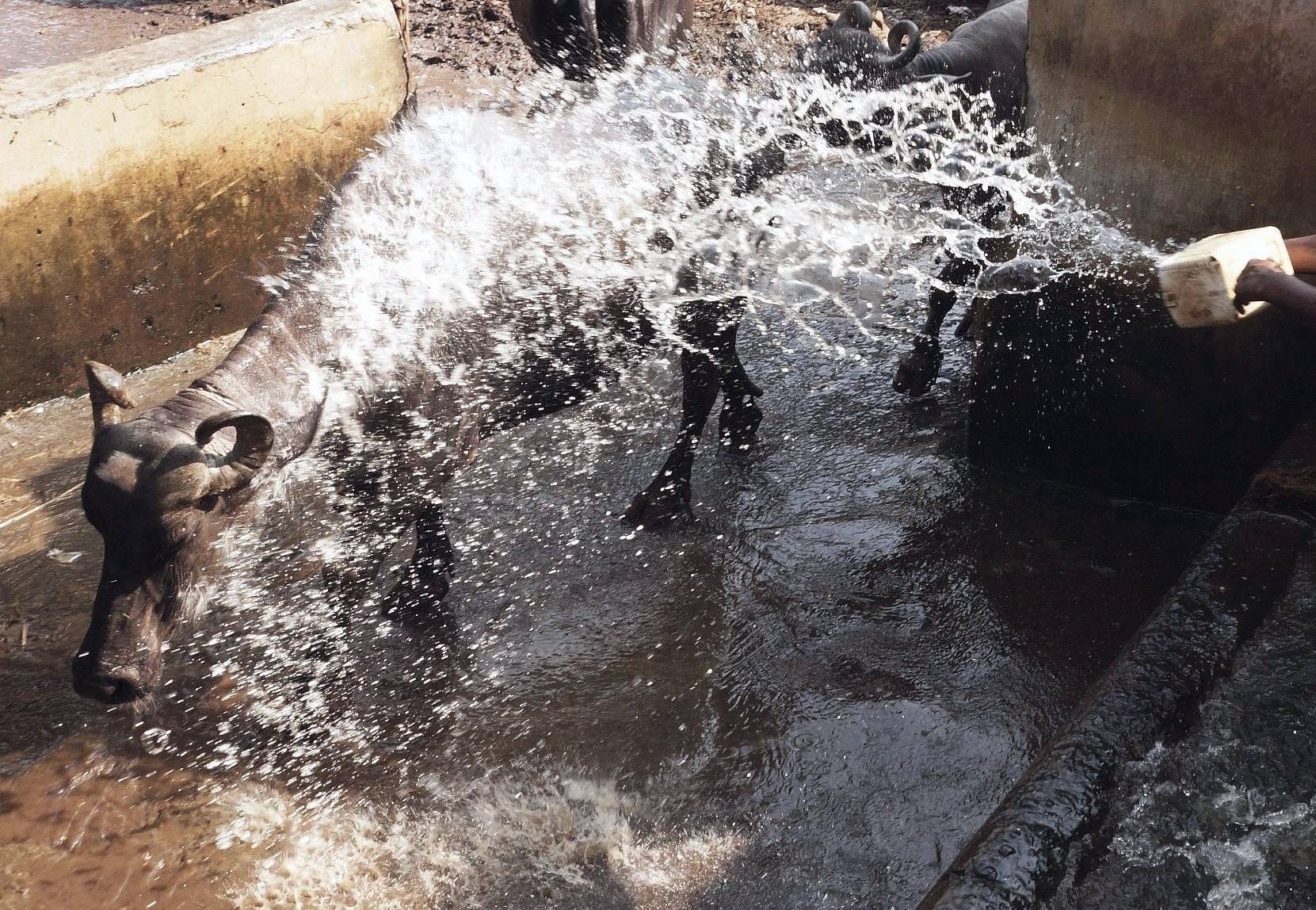 I have seen people washing food and clothes at the same location, in dark green coloured water in a wide canal (not stream) with minimal flow.
And people washing vegetables in water that most reading this would be unlikely to wade in.

The reasons are uncertain but are probably based on expectations and lack of an even basic understanding of the implications. Up until the 19th century the idea of washing one's hands before performing surgery was unknown, and well into the 20th century the strong links between hygiene and disease transmission were still largely not established.

A bit of colour in the water is, presumably, incidental.

Are you just looking at pollution and other negative possibilities, or are things like transport of people and goods worth considering? If you're thinking about transport, does your society have tech/magic to sail against the current, or is it all human powered? Is there a port city at the mouth of the river that can trade with other cities along the same body of water?

Not the answer you're looking for? Browse other questions tagged reality-check magic politics medieval-europe .

43
Medieval politics with fantasy races
17
How would an isolated village in low magic setting develop an economy beyond bartering?
17
The nation without villages
7
How long would it take to build a simple stone building in medieval times?
3
What could a non-expert blacksmith from a small village do to secure a job in a city?
3
Feasibility of a village improving its economy through hot springs
3
How large should my fortified medieval village be?
3
How would gryphons go about defending themselves against humans?