So one can have a vat with some disturbing/mixing mechanism and just have your bacteria grow in a specially formulated growth medium. This is simpler than managing something like algae that requires sunlight to photosynthesize.

Bacteria can duplicate at a rate as fast as every 10 minutes at a exponential rate this can generate a lot of biomass.

Bacteria has a cell wall consisting of a sugar protein called Peptidoglycan and coupled with the small volumes of bio-materials and gas volumes that bacteriums develop could potentially be sufficient to sustain a human as far as I understand it.

Now my question is: Is it possible to sustain a human as they exist today by growing bacteria in a vat, draining the growth medium, "sterilizing" the bacteria by sonic pressure or something like microwaving the contents of the vat, then eating/drinking the goop/sludge that is left which should exist of biomass that is human digestible.

I know that there are algae "pills" made from compressed algae that allows a human to generate ATP without the consumption of carbohydrates, so I'm trying to figure out if the same is possible with bacteria biomass.

This is simpler than managing something like algae that requires sunlight to photosynthesize.

Bacteria can duplicate at a rate as fast as every 10 minutes at a exponential rate this can generate a lot of biomass.

There Ain't No Such Thing As A Free Lunch, even if you make it with a load of bacteria. The nice thing about photosynthetic algae is that the feedstock you use to grow them with is basically air, water with a sprinkling of nutrients, and then some light (sunlight or grow lamps, according to availability and convenience).

Conversely, non-photosynthetic organisms (such as the yeasts L.Dutch mentioned) require generous amounts of food to get them going. Renan's beer requires a decent amount of barley to be saccharified to provide the sugars the yeast needs to eat in order to replicate and provide useful metabolic byproducts. To get that feedstock, you need to grow crops, and you need additional energy and infrastructure to turn those crops into stuff that your microorganisms like eating. And, y'know, you could just grow human food on the barley farms instead, and cut out the middlemanorganism.

So what you really need is not just a bacterium that produces food gloop (by being edible and nutritious by itself, or by synthesising an excess of things good for people) but a feedstock for it that does not require a farm to grow it. I have no idea what you'd use for that. With sufficient effort and handwaving, maybe you could make something that eats crude oil and secretes food, but that sounds like a pretty serious bioengineering challenge.

I know that there are algae "pills" made from compressed algae... I'm trying to figure out if the same is possible with bacteria biomass.

You are presumably referring to spirulina. Despite photosynthetic bacteria being commonly referred to as "blue-green algae", "algae" is now generally used to mean only eukaryotic photosynthesisers and cyanobacteria are definitely not eukaryotes. Thus, spirulina already fulfills your requirement. Probably not a good idea to use it as your only source of protein unless you've found a way to ensure that the end products is definitely free of all of the toxins that various cyanobacteria species produce which can cause serious long term health effects. I believe (though I'm definitely not certain) that this is the only example of a purely bacterial-derived foodstuff in existence (as opposed to bacterially modified foodstuffs, which are very common).

What you propose here has already been proposed with a slightly different micro organism: not bacteria, but yeasts.

Just to cite an example, in Asimov's work The caves of steel mankind, having abandoned the surface of the planet Earth to live in enormous underground cities, relies on cultures of yeasts to obtain nutrition.

Some integration of nutrients is probably necessary, together with some manipulation to make the whole thing mole palatable to humans (a squishy goo is hardly comparable to steak with potatoes or a vegetarian curry when it come to watering one's mouth), but in principle it is possible.

Using bacteria could extend the range of carbon fixing organisms that make our food.

One of these is the green algae Nostoc. 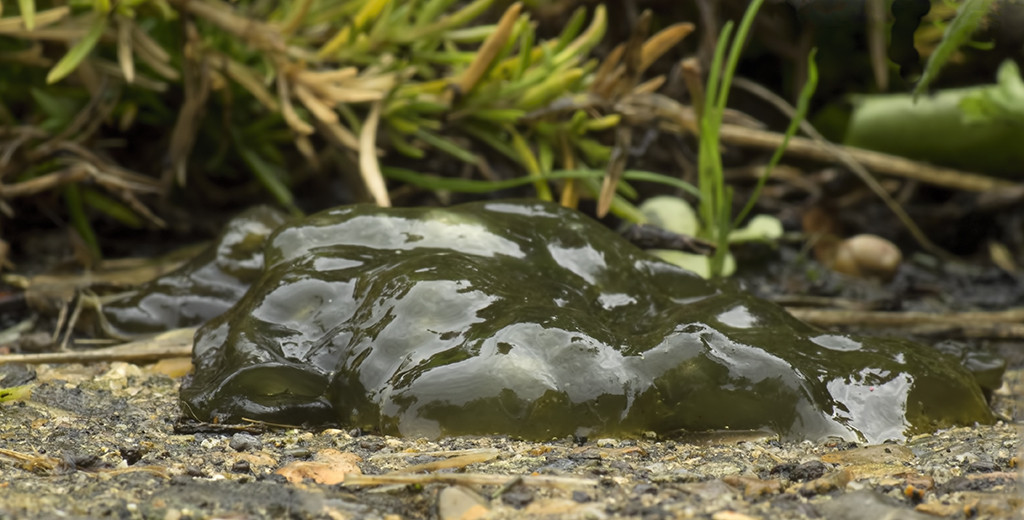 It caught my eye because I have been reading Charles Fort, and growths of nostoc are invoked to explain "star jelly" or unexplained blobs of goo that seem to have fallen from the sky. Star jelly is photosynthetic and nutritious - it is also called "fat choy" and is dried and eaten. I propose for your fiction that your people maintain tanks of sweet gooey star jelly.

I think a bacterial stew would be deficient in protein because, as you described, bacteria are chemical factories encased in an edible bag, and are not meaty. They contain amino acids but may not contain all the essential amino acids we need in our diet.

I imagine you could work around this, though. If your bacteria weren’t simple single celled organisms but were instead multicellular like paramecium that formed, in effect, a complete protein for us. Or your larder also contained a bacteria bioengineered to produce a complete set of amino acids for our diet the same way some bacteria produce antibiotics or toxins, then that fluid could be harvested and used a broth for your stew.

I think the primary challenge would be constraining other organisms from spawning in your bacterial mediums. You would be growing them on such a scale that small scale contamination by other organisms could result in large crop failures — toxic or noxious byproducts generated by free-rider organisms that snuck into the mix.

Not the answer you're looking for? Browse other questions tagged science-based biology bacteria or ask your own question.

4
What sorts (if any) of edible fungi (or other species) can survive lowlight conditions?
3
Utilize virus & bacteria to perform fast kills
1
Immortal bacteria apocalypse
7
A world without bacteria
1
Nanorobots versus bacteria
8
Is it possible for an organic species to generate a steady magnetic field?
7
Dead on Mars: Surviving Bacteria
8
Could bacteria survive on a star?