How to restrain your dragon?

There were many questions in this site about slaying dragons, butchering dragons, but never one about restraining them. Poor Gyvaris managed to avoid all those fates but the last.

Gyvaris is a dragon, currently in the "service" of not St. Martha and not St. George. Having been nearly killed and unintentionally publically humiliated by, then forced to serve them, Gyvaris is unstable.

Stories of dragons razing entire cities by themselves is just unsubstantiated dwarven propaganda (they'd blame everything from missing homework to the Armenian Genocide on dragons if they could get away with it). Regardless Gyvaris' hissy fits could still range anywhere from property damage to burning children.

That is problematic because Gyv is supposed to be a layer of defense for George's village and that limits restrainment methods. It's certain though that you'd want to shut him down IMMEDIATELLY if things are going south.

Dragons are roughly the same size as a horse and as intelligent as humans. Their natural weapons are their jaws, claws and a spade at the end of their tail. They're slim and athletic with enough strength to overpower a human but not bigger animals (i.e: bears). Their breath weapon is basically an explosive charge (think of thermobaric grenades), the shot limit is 5. Under normal condition, the dragon can regain 1 shot per hour.

How could a dragon be restrained in a fast, reliable way to prevent him from damaging others or himself when throwing a tantrum?

The tech-level is late-medieval.
Dragons can fly but we're assuming they choose not to when in a fit.
This question is about restraining dragons, not killing them, if they disobey orders. 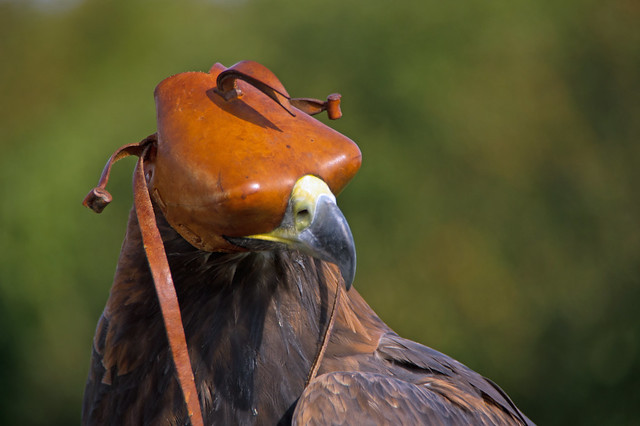 Lots of animals calm down when they see nothing but black. Birds of prey are the best known and probably closest to a dragon. But it works for cats (wild and domestic) and horses that I know of. I feel like I have seen nature show where captured creatures (?raccoons) have a breatheable bag put over their heads, and they become more mellow.

Your dragon has a hood, or blinders. His rider flips it on (or down). When he sees only the flat black, the stuff that was getting him riled up disappears from his perspective. It is like night came early. Night time is time to chill out. And that is what he does.

Oh no, you can't restrain a dragon, you have to train your dragon.

Given that over the last few years there has been a significant series of documentaries made explaining in detail How to train your dragon I shan't go into specific detail here, but we must go over the reasons.

Like any large or dangerous animal, if untrained it can be a danger to itself and those around it. Consider large dogs for example, an untrained large dog is a significant risk, just by virtue of the damage it could do by running off with a small child being dragged along behind. No tempter tantrum, no malice, just a lack of training. One could say the same of a bull, that rope on the ring through its nose is really just a hint, if that bill threw a tantrum the rope will not make much difference at all. Hence training is critical, always positive reinforcement not punishment.

Or use an adamantium choke chain.

"They're slim and athletic with enough strength to overpower a human but not bigger animals (i.e: bears)."

Cages. Bears are stronger and can't escape cages, sl your dragon would be properly constrained in one.

Also, feed him opioids so as to cause an addiction. Once the dragon is done performing whatever defense tasks here and there, he'll know to go back to his cage for his next fix.

Data point - as comments may vanish.

A dragon tolerates you saying that you own it.
It may appear somewhat domesticated, just as a cat may.

After I stroked "my" drag... er cat for a while yesterday it turned it's head to channel my fingers into its mouth and held them between its teeth with enough not-quite-skin-piercing force to ensure that it knew I knew and I knew it knew what the relationship was. Dragons are not always as skilled as cats at determining where the warning/worse boundaries lie.

If they choose not to fly in fits, then I could see them being knocked out by anyone who can surprise them or is fast enough. Maybe a hit to the windpipe to stop the flame breath and a hit to the noggin to knock it out. Maybe someone more daring could choke out the dragon to knock it out.

From there, the wings need to be tied and the muzzle can be tied shut to prevent fire and biting while still letting it speak a little. From there, the dragon could be restrained like any big person. Maybe with rope serving as makeshift handcuffs or maybe chains and shakles would fit the setting better.

You could have him wear an elaborate harness with mounting points for pulleys, that extends over his wings. Wind ropes through these pulleys and all you have to do is assign some villagers to be handlers, and if things go south pull the ropes HARD. The dragon is wrapped up tight and can easily be released when he calms down.

Not the answer you're looking for? Browse other questions tagged science-based dragons or ask your own question.

3
Dragon evolving from humanoid: Ice dragon
69
How to butcher your dragon?
5
How to care for your critically injured dragon: Medieval edition | Part 1: staying hydrated
6
Dragon Rider Genes
3
“Where are you going dragon, don't you dare leave your rider behind!” How can a rider keep up with their dragon?
7
How much aqua regia should a dragon store?
5
How to slay my acid dragon?
4
How could this dragon-killing poison work?
20
How could a dragon-proof toy work?