Why would one hemisphere of a planet be very mountainous while the other is flat?

I just read this question about how to get a planet to have one hemisphere with tropical climate and one with polar climate. The (not yet accepted) answer with the highest score recommends placing large enough mountains on one hemisphere, so that simply by altitude, it would be cold on the ground.

Now I ask myself, what would have to happen to a planet so that exactly one hemisphere is (exclusively) full of high mountains whereas the other hemisphere is entirely flat?

This question might be the same as mine, just inverted. I do not know if this is the case though, and I also do not find the higher-scored answers to be answering my question.

Since it came up in the comments: I'm only asking about landmass. The underwater topology does not factor in here, since the question linked above is framed in terms of human habitat.

It turns out there's something very much like this, right next door to Earth. Observe the topography of Mars: 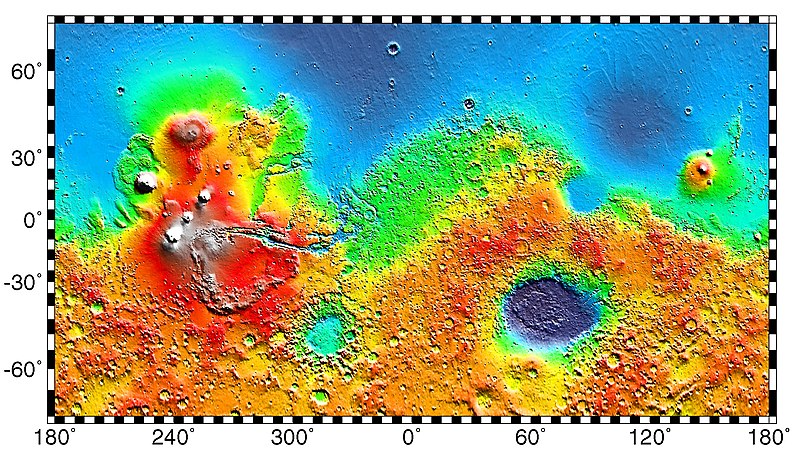 The large blue areas in the northern hemisphere, making up about a third of the surface, are about 4 to 6 km lower in altitude than the yellow/orange highlands to the south. This dramatic discrepancy is known as the Martian dichotomy and there are two major schools of thought for how it came about.

The first is that the dichotomy represents one or more colossal impact craters. If it was from a single impactor, it would be the largest impact crater in the solar system. Opinions are divided as to whether a single impact can explain the resulting geography, or whether it's better modeled as multiple (still massive) impacts. Of course you could do either.

The other theory is related to long-ago Martian tectonics. The theory goes that for reasons unknown (and this is still an active subject of research on Earth, let alone Mars), one hemisphere featured one or more huge upwellings of material from the mantle into the crust, and the other featured downwellings. Over an extremely long period of time, the result is that crustal material migrates from one hemisphere to the other. (The average thickness of the southern crust is twice that of the north.)

In the case of Mars, the dichotomous hemispheres are north and south, but this may just be coincidence. Neither process has any particular reason to favor one orientation over another as far as I know, so having a dichotomy between east and west hemispheres should be possible.

Note that there are still local variations: there are craters and mountains in the north part of Mars, valleys in the south part. However, the difference should be enough to establish the broad climate dichotomy that you're looking for.

Here is a more speculative explanation.

The result: one side is always bright and the other dark. The bright side is a lot warmer than the dark side.

Quickest solution - one hemisphere is where all the tectonic plates meet. Or if there are some on the other one it's under the ocean so the height of the "mountains" don't have influence on the weather above.

Other solution could be - mountains from rocks soft enough to be levelled with glacier and erosion.

As I understand it, this discrepancy in centers is thought to be related to the moon's mode-locking to the earth. So, to have a planet with a normal day-night cycle that forms this way, you would have to re-spin it, possibly about a different axis than the orbit. What's harder, you'd have to re-spin it without breaking up or melting the crust. And you might have to remove the body it was mode-locked to.

One problem with your question shows up if you want an earth-like percentage of ocean. The low terrain would mostly flood and be ocean floor. If you want lots of ocean, and land masses in both hemispheres, and a high / low distinction between the hemispheres, you need a more complicated situation.

Not the answer you're looking for? Browse other questions tagged planets geography topography or ask your own question.

29
How could a planet have one hemisphere way warmer than the other without the planet being tidally locked?
19
Would it be possible for a planet to form so it has all of the landmass in only one hemisphere?

18
Making a planet habitable for humanoids: The star
19
Would it be possible for a planet to form so it has all of the landmass in only one hemisphere?
2
A planet with a diurnal cycle on only one hemisphere?
6
I've determined how many planets my solar system could plausibly have. How do I figure out what kind of planets they are?
16
How to explain one side of Super Earth is smoother than the other side?
4
Is is plausible for an Earth-like planet to have all of its land located in one polar hemisphere?
29
How could a planet have one hemisphere way warmer than the other without the planet being tidally locked?
26
What would keep traders away from a specific area of the ocean?