How quickly would a wooden treasure chest rot?

Suppose a wooden treasure chest is placed in an underground dungeon in a medieval European climate. The chest is as sturdily built as is practical, but isn't protected by any kind of magic or advanced technology.

In roleplaying games, wooden chests seem to last thousands of years without fail. But realistically, how long until the wood is rotten so badly that it can no longer functionally protect the contents of the chest?

"Realistically" is a pretty broad spectrum of interest for us here at Worldbuilding LLC.

The condition of a standard, non-living wood treasure chest over time is naturally affected by many factors, a few keys of which are the following:

Realistically, a well wrought treasure chest, crafted of thick, high quality wood & metal such as brass or bronze, placed upon a rune engraven plinth having several integral feet upon which the chest may repose safe from rat, roach and termite, in a well ventilated & not overly damp donjon in a moderately calm thaumic climate withal, should last, barring the wanton destruction of Orcs and other assorted teenage male adventurers of the Mannish persuasion, for centuries.

Here's a wooden chest of the Saxon era: 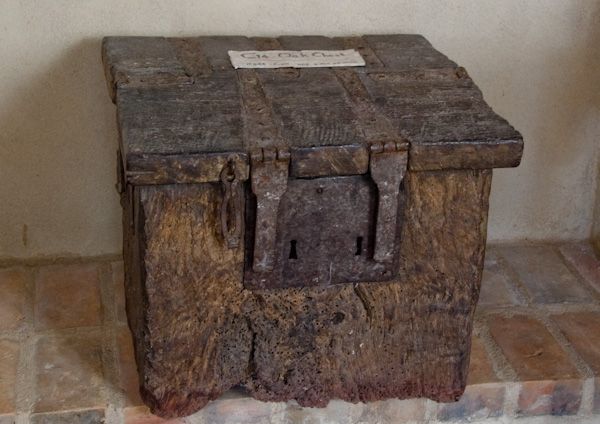 For the terminally curious: a very interesting article on ancient wooden chests.

The oldest wooden chest I have seen is 4.700 years old. It is an ancient Egyptian chest which now resides in the Glyptoteket art museum in Copenhagen. I don't recall under which conditions it was found, but I imagine that similar conditions could exist in a European climate, though humidity is probably a greater problem in Europe than in Egypt. You wouldn't want too dry a climate, though, as I imagine this will dry the wood out and make it brittle.

The biggest determinate is going to be ambient humidity. If the air is dry, they should last indefinitely. I have several of my grand parents, and great grandparents steamer trunks -- made from cheap plywood, I think, and covered in painted sheet metal. The latter makes them squirrel resistant. They are outside in an unheated shed. Some are over a century old, having come across in the great immigration wave in the early 1900's Our climate is hardly desert -- about 20 inches of precip per year, but only on rainy days do we get humidity over 70%

The second biggest determinate is the type of wood. Cedar and redwood last well, and are easy to work. Osage orange will outlast cedar 2:1 when used as fence posts, but getting good boards would be a challenge.

If price is no object there are tropical hardwoods used for dock piles that are very rot resistant. You also have to come up with a plausible way for that wood to get to your setting.

Wood treatment will have an effect: Now we use copper/arsenic compounds and can easily get 50 year buried in damp soil times for tree species that would otherwise rot in 5 years. Creosote is an earlier treatment, used for railroad ties and mine timbers. To maximize the penetration, submerge the boards in creosote oil, and heat until water in the wood begins to come off. Stop the heat, and the steam in the wood condenses, drawing the oil into the pores. Repeat several times. (This can be done with any preservative in liquid form) This leaves the outer part of the wood with little or no air in it, which means the fungi that do the rotting can only work on the surface.

Since the soil line is where most of the rot occurs in timbers (moisture and oxygen present) one trick used was to put a band of tar on the wood a foot above/below the soil line. Ideally applied hot so that it keys into the rough texture of the pole or post. So making your treasure box in whatever way you wish, then applying a coat of hot tar will not only keep the chest intact longer, but your Hero now has to find magic tar solvent to get into the box.

Sheathing the wood with sheet metal both discourages pests, and reduces wetting from casual spray. I suspect this is why steamer trunks are sheathed. However water that gets between the sheathing and the wood will tend to remain there for a long time.

Iron nails are a bad idea. Rust never sleeps. So to fasten your boards to one another some combination of dovetail joints and glued dowels I think would last longer.

Finally, for really long lasting chests, although brittle and unsuited for easily being moved, make them out of stone, or make them from fired porcelain

The duration extremely depends on how exposed it is to the elements, how humid (or rainy) it is, how often it hits the freezing/thawing point during a year, if plant life is affecting it, and other such factors.

However as a reference point, this massive wooden building in Turkey has all but collapsed after about 60 years of neglect, and there's an effort to restore and maintain it.

Not the answer you're looking for? Browse other questions tagged technology medieval-europe preservation .

79
How quickly and accurately should news travel in a rural medieval setting?
54
Wooden sticks are the only allowed weapons in a technological society - how far would these weapons have progressed by now?
12
Mimics and wooden chests: chest-like monsters, or monster-like chests?
2
At the current technological advancement rate, how quickly would we be able to 3D print weapons on the battlefield?
6
How long would a creature the size of an argentinosaurus' bones last in a scrubland?
7
How could a small civilization move about normally, tactically, and quickly in a large swamp?
4
How could an iceberg be created quickly?
3
How long would a gramophone record made of vinyl remain comprehensible when played?
4
How quickly can a world industrialize?