Armor that is “good” but also weak in some way [closed]

Based on history, tactics are your best bet.

A great example is battles from the British-Zulu war, which didn't have a great outcome for the Zulus but contained many examples of tribal warriors outmaneuvering the vastly more developed British forces, often because the dominant force became complacent with their power and were caught completely off guard.. Armies rot from the top down.

If you want a genuine fault in more sophisticated armour, choose a weakness that people would think doesn't need to be accounted for. You can either do this in a creative way or a geekier physics way. A great example of being creative would be taking inspiration from here. There's a fascinating Murdoch Mysteries episode where a guy who's blinged out in metal jewellery is killed by microwave radiation because the metal makes him into a human Tesla coil. His rings and watches take on huge amounts of electrical charge whilst he's being electromagnetically bombarded without knowing it. When he takes off his rubber shoes later on he's zapped as he's grounded to earth. It's scientifically feasible, in a way. You could certainly exploit this as an immediate effect, too.

Outside of materials, manufacturing defects like this meant armour was vulnerable to unexpected projectiles (in this case, a buckshot would have deflected off the main plates and straight into the wearer's head). You really do have a lot of choice, and taking inspiration from real life often helps write a great story. Good luck!

I think the answer to your question (in my opinion) ranges from realistic (it could happen) to scifi (still realistic but with extra bells and whistles that seem cool). Here's a list of ways you can handle this:

EDIT: I'd like to amend my point above by saying that any kind of blunt force trauma would hurt a kevlar vest - no need to steal their guns and ammo. Just fire at them with slings, tomahawks, spears (throwing or otherwise), whatever. Upside is that it's potentially cheap and doesn't require intense tech. On the downside it requires a lot craftsmanship, and your ill-equipped side needs to dodge bullets better than the enemy dodges your projectiles and stuff. Thanks to @Alice for pointing this out.

I hope this is useful for you, but the less armored people need to use the brain intead of the weaponry. I'm going to answer from my limited knowledgement of warfare.

PD: Sorry for my english.

The best scenario for the "primitive people" (I'm going to call them that way, if you don't mind). Here, you need to use the environment to made defences. There are plenty of defensive tactics to use. They can make an improvised fortification like the romans used to make. The tactics points are reduce the attackers number until the others run away (that's how battles always end, when people run for they lives). Use traps, ambushes, etc.

If the defenders got "guns", like you said, well... it's gonna be hard. If they build a trench, they are defended enough to considerably reduce the attackers numbers. No single human with a healthy mind would run directly to a trench in a suicide mission for the good of the country (warfare ain't like the movies). The primitive attackers would run for they lives.

Caesar were outnumbered by Cneo's (Cneo is also known as Pompey) forces (it's not your issue, but could help), so he "hid" some of their troops in a new line. When cavalry hit the troops, found that new soldiers were behind. They ran away, if I don't misremember. Next, Caesar troops flank Cneo forces in a "surprise" attack, making them ran and winning an important battle.

Your people with primitive weapons get upgrades. 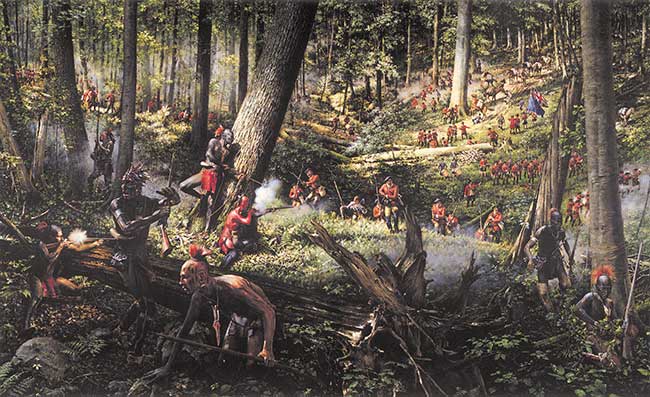 Depicted: the Battle of Bushy Run, 1763. Here the Ottawa fight the British using rifles. How did Indians get rifles? The same way as anyone else - they bought them, or traded for them, or were given them by the enemies of the British.

The Indians in colonial America figured out rifles fast and in many places the French were happy to arm them against the English. It was not lack of fighting ability that doomed the natives.

So too your people. Once they find out about guns, they need to get some and fast. I doubt they will need much encouragement.

Not the answer you're looking for? Browse other questions tagged post-apocalypse armors or ask your own question.

12
How would metal cloth affect armor design?
31
How do I encourage fully armored knights to carry a shield
6
What Limitations or Modifications Would Medieval Armor or Weapons Have if Modern Quality Steel Were Used?
11
Fire Resistant Armour for a Medieval Era Like Setting
10
Natural Armour and Weapons
13
How effective would wooden scale armor be in a medieval setting?
6
Post-apocalyptic aircraft
10
Why not use futuristic pavise ballistic shields for protection?
15
If it could be shaped, would chitin from giant insects make decent body armor?