In my world the „apocalypse“ dates back several decades and most people have settled down, the scavenging is left to professional adventurers who roam the less accessible and more dangerous ruins of a destroyed metropolis.

I want to equip those adventurers with useful tools for scavenging while limiting the the equipment to the most important things to keep it as lightweight as possible and enable a character to work with the things he can actually carry on his body (walking back to one's vehicle several times just to produce everything he needs doesn't work for a film or game).

(Some of) the tools should enable the user to defend themselves without carrying additional weapons against attacks from wild animals or primitive tribes (in fact many weapons originated from tools).

Advantage:
Compared to present-day burglars the scavengers don't have to be as careful - instead of carrying tools for lock picking one could simply knock down the front door.

Consider:
Fuel, gas (actual gas) and electricity are quite rare although who could rather come into possession of fuel and gas than the very people who scavenge the old world's remains...

The very question is:

What are indispensable tools for professional scavenging?

(Such as climbing walls, roping, prying doors or safes or walls and making ones way throught the debris.)

Please additionally state, which other tools your suggestion would render redundand
(e. g. carrying a crowbar there is no need for an additional welding torch or sledgehammer)
and if it could be used (or modified) as a weapon.

My ideas so far:

From a postapocalyptic character I dreamed up for this question, who sabotages a helicopter.

I was thinking about Hack's homemade hacksaw. It has a clockspring at the base she can wind up. On triggering it moves the blade back and forth a couple of mm, very fast.

Her hacksaw converges on a bone saw. A good metal scavenging tool which is why she carries it. Vibration amplitude can be adjusted depending on what she is cutting. For metal or bone minimal amplitude and maximum vibrations. For flesh, the opposite.

Not too creative, but lightweight and versatile. You can shoot a light line and use it to pull up a heavy line that you can climb. You can launch flame arrows into dark spaces to light them up without going in and getting bitten. You can hunt. You can fight. You can make your own ammo. You can retrieve and reuse your ammo.

This is from World War Z - Lobo is short for "lobotomizer" and was a tool/weapon made (actually mass produced - 23 million of them) from the frames of cars. For a postapocalyptic fiction I like a thing that shows its provenance. I picture the lobos as being recognizably pieces of car frame, modified in a standard way. For your characters I imagine them as hybrid quarterstaff / crowbars. And they can be thrown like a javelin.

These are plastic bottles full of homemade gunpowder. Gunpowder can be made with primitive tech and plastic bottles would be great for keeping it dry and contained. Your demolitions character only uses Mountain Dew bottles, for her own reasons. Blast bottles can be used to open doors and dislodge things. Or you can wrap one with a chain, light it and throw it as a grenade.

A proper tomahawk has a hatchet blade counter-balanced by a small hammer surface on the back of the head. A steel tomahawk whose axe blade has a pointed beard (the part sticking down from the main axe blade) can also be used for prying.

In one tool, you have a weapon, a hammer, an axe, a prybar, a skinning blade (hold the hawk by the hammer surface to scrape skin from a kill and then to scrape clinging meat from the hide), and a climbing aid (can dig the axe into wood to make the handle a hand-hold or use the beard to hook a ledge too high for you to reach.

are the best frends of any scavenger. You can wear them both and they both are not bad weapons and have a lot of different usages. + knife - you shuold always have a knife of some sort with you in any kind of hiking even now.

A War Pick and Rope

The pick side combines the advantages of a standard pick and crow bar. You can use it to help climb buildings, by stabbing the pick side into the wall. You can use it to destroy stones, rocks or metal contractions in your way. The metal pick will provide much greater penetration that a crow bar or axe and doubles up as an excellent weapon. You can also jam it into all sorts of cracks and use the war pick to leverage something out just as you would with a crow bar.

The next part is the rope. Rope is pretty damn important when spelunking or scavenging. Due to the war picks shape, you can use it as a grappling hook, by tying the rope to it,swinging it then throwing it. You would also use your pick as a ranged weapon, swinging and throwing it at opponents then pulling it back. Finally, you could use the rope to allow multiple people to apply force to the pick, so if you have a particularly stuck door, jam the pick in there, tie the rope to the pick and have your friends help you pull away.

Forget the crowbar, get a halligan bar.

Scavengers are less like burglars and more like firefighters they just want entry as easily as possible, so look at what fire fighters and other rescue units use.

halligan bars are far more versatile than a crowbar and way better for getting through doors and walls. They were designed by firefighters to get into buildings fast without carrying a lot of gear. the metal cutting claw variety (see below) will break padlocks and tear open steel doors. So for entry with the minimum of additional tools it is perfect. It is the standard tool for forced entry, even the military often uses them. It does everything a crowbar does and a lot more. There is nearly nothing it can't be used to enter, especially if you have time. Since a wide variety of them exist, there is even believable a real ornate one actually exists your character could have found, firefighters sometimes give ornate axes as awards/memorabilia after all. 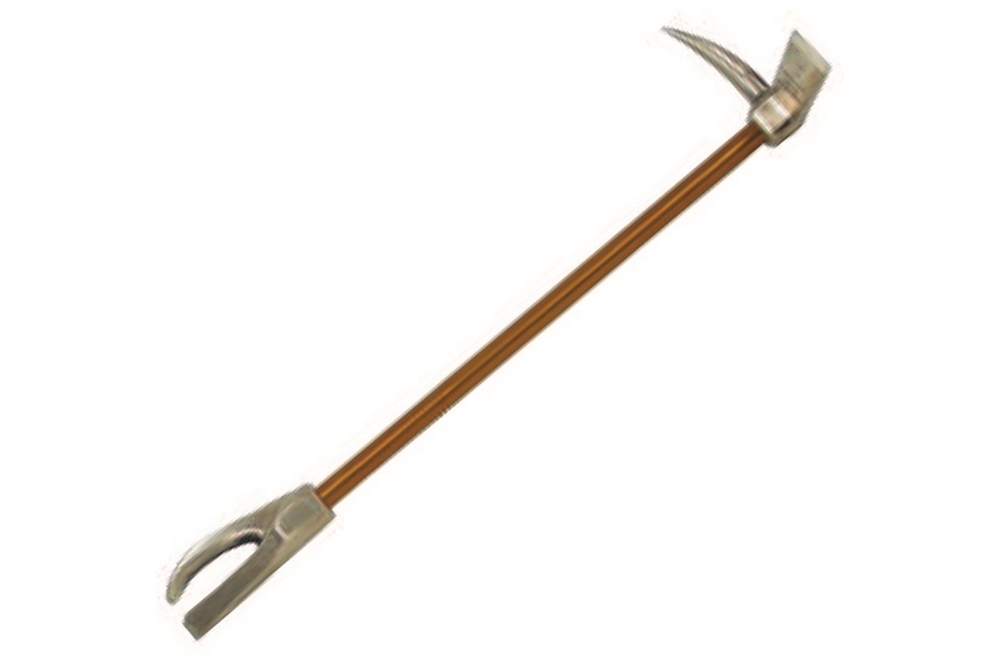 The other thing you need is a good backpack, you have to carry whatever you find afterall.

A light source because abandoned places are dark, especially the areas in which anything is likely to still be valuable, head mounted for preference.

but the best thing they could have is a partner, anyone who does demolition, fire, or rescue can tell you a compromised building is very dangerous. spend too much time in them by yourself and your luck will run out. Without aid you are just another corpse in the rubble.

If you are going to scavenge, you don't know what you may find that is valuable. So you must be ready for a lot of different situations. You would probably need enough tools that carrying them in a backpack would not be viable.

I can think of: 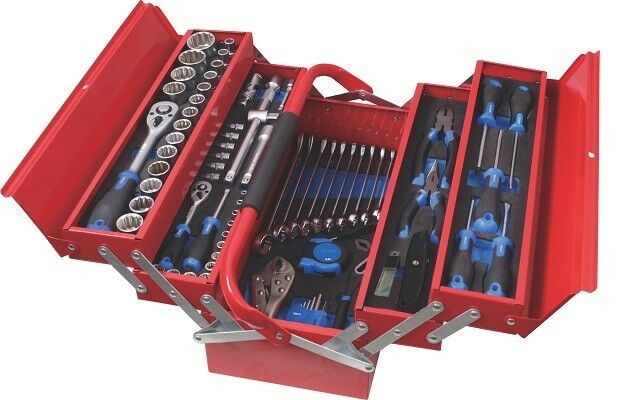 Because it would absolutely suck that you can't get to the treasure inside the vault for want of a 1/8" phillips screwdriver. 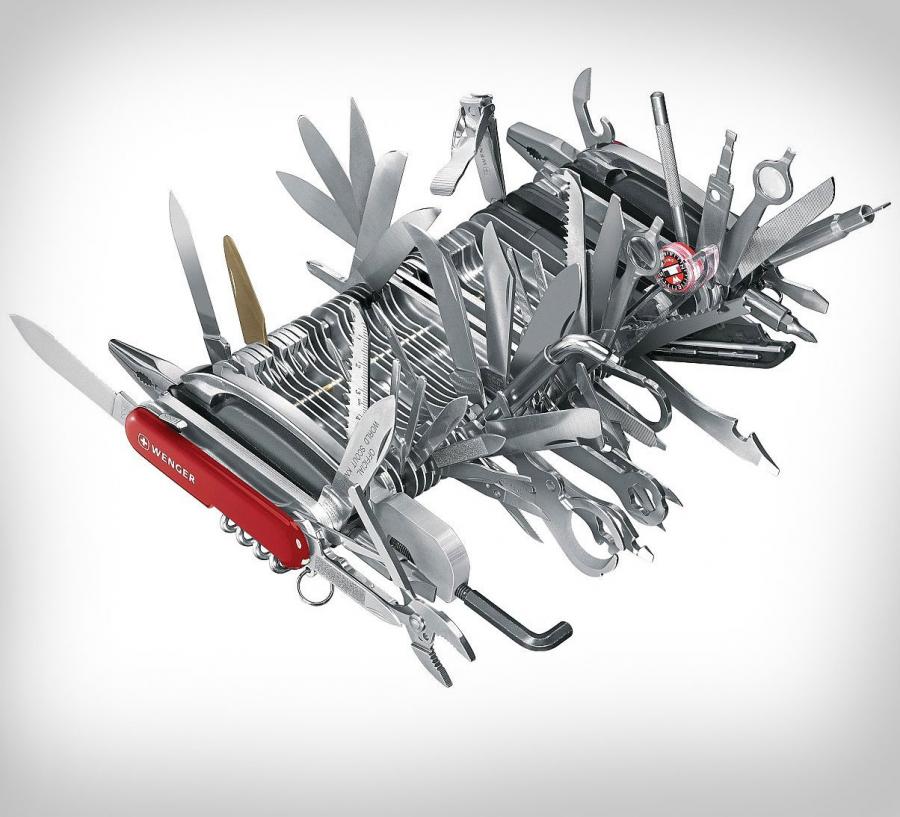 Opening and closing the toolbox all the time sucks. With this you can pick your teeth, cut a rope and open a can in a very practical way. 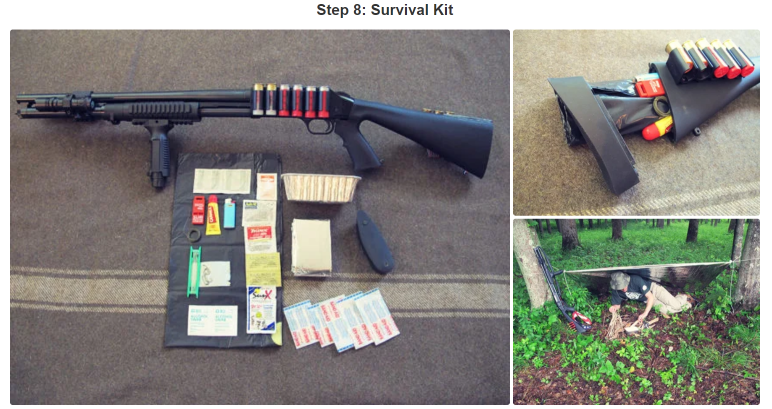 This guy carries a mini-tent, food and water in the butt of his shotgun. He also carries condoms and a blanket there (seriously, go check). 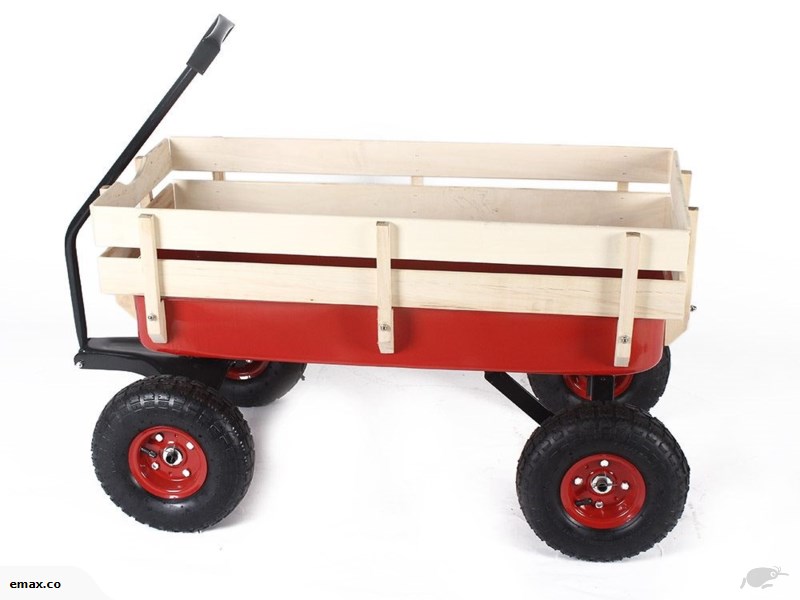 You will want to bring that bounty home, right? Also helps carrying tools. 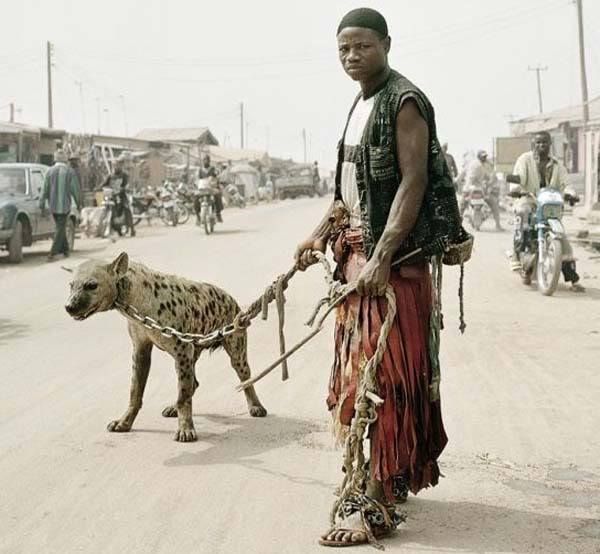 A hunting companion that is also a friend and living alarm. Can also be trained to pull the cart and to find specific kinds of goods in the wastelands. Doubles as food when you run out of other edibles. 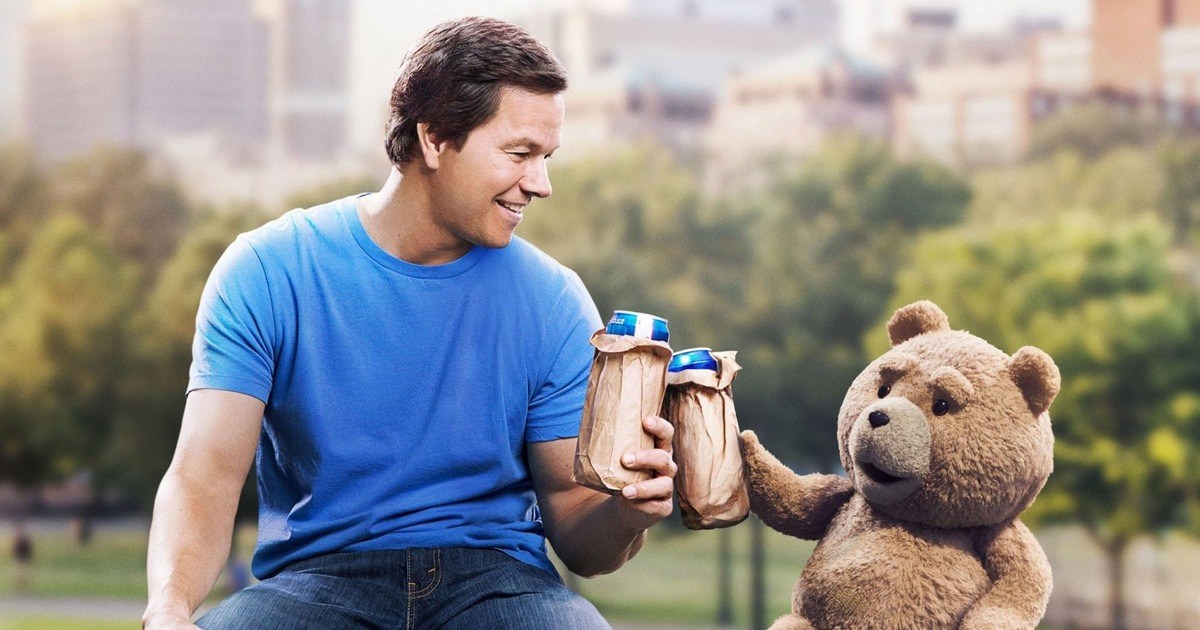 Isolation can drive you mad. It's always nice to have someone to talk to, and the bear is more articulate than the dog when you eat the right pills. Also you've probably already eaten the dog.

Not the answer you're looking for? Browse other questions tagged reality-check weapons post-apocalypse tools or ask your own question.

8
Primitive tribe fighting back against advanced military force?
6
Production of ammo in post-apocalypse - problems and solutions

5
How would tools develop differently if we had a trunk instead of hands?
7
Could crash survivors on an island for months smelt and craft iron tools?
5
How can anthills use tools?
22
What would iron-age tools and weapons be like if they were redesigned with modern metallurgy?
4
Is there an actual use for Gold Tools?
8
Could a Dinosaur make tools with only three fingers?
5
Material for weapons and tools in a magnetic field
4
What would be common simple materials for tools in a large-scale archipelago?
26
Justification of the trope that mining tools are tougher than military equipments
1
Mining, Scavenging and Recycling in an artificial world