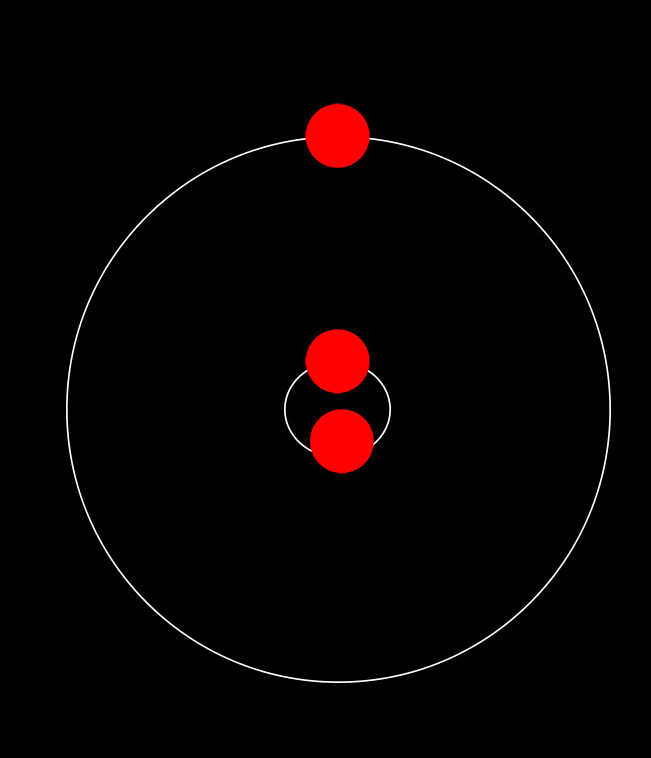 In an alternate universe, we have a spot in the Orion Arm where we have nine Earth-like planets orbiting three red giants. Judging from the size and luminosity of each star, it's been conferred that each of the stars has been a red giant for 542 million years, which means it doesn't have as much time left (although, as this article suggests, depending on the original solar mass, some red giants can live to twice as long as Earth's current age!)

This map is a basic simplification more on the structure than the distance. Essentially, the center of the system is a binary of red giants orbited by a third, solitary red giant.

I imagine that the binary orbits each other from a distance of four AUs, but is that far enough for the stars to orbit each other without crushing under their own gravitational weight? And how far would the third star have to orbit the binary to ensure both gravitational stability and a wide enough habitable zone for nine Earth-like planets?

Quoting from this answer on a very similar question:

Distances and mass ratios have to be large.

I am afraid this is not the case for your system of red giants:

A red giant is a luminous giant star of low or intermediate mass (roughly 0.3–8 solar masses (M☉)) in a late phase of stellar evolution.

I suspect that it is enough to destabilize the system. Especially when you throw in the 9 planets.

Not the answer you're looking for? Browse other questions tagged science-based orbital-mechanics stars .

4
Would this simplex ternary system be stable?

4
Could this complex star system work in real life?
1
In Search of a Super-Bright, Super-Stable Star
4
In a Red Giant Binary System, How Far and How Wide Can the Habitable Zone Be?
4
In This Picture, How Far Can One Binary Orbit the Other?
10
A Habitable Zone Within a Habitable Zone--Would that Make any Difference?
2
Would This Solar System Be Stable?
5
Would the seasons on this solar system be too extreme for Earth life to thrive?
4
What is the Roche Limit of a White Dwarf Compact Star?