The Wikipedia page on sewer gas states that

However, no references or further details are provided.

So, suppose that a typical modern house had its vent stack replaced by sewer gas burner system. Just how much power could that actually produce?

Addendum: Yes, biowaste is currently used for power generation. And one could set up a bioreactor specifically to produce power from your own local waste. But this is specifically about the power available to a single house via the "natural" gas emissions from an actual sewer. Regardless of how many people live in a house, a modern house (not apartment) most places in the world that have municipal sewer systems will have a single connection to said sewer via pipe of one of a few standard sizes, which is also connected to a vent stack which allows gas to get sucked into the plumbing system when a slug drops through the pipes to avoid accidentally clearing P-traps, and which allows sewer gas to escape out of the house rather than building pressure behind P-traps.

So, how much power could be obtained just by tapping that vent stack to access the gasses coming up from the sewer?

Sewer gas lamps are an (archaic) thing that exists, but they were never used for actual light or power--merely to induce an updraft to force sewer gasses to vent above head hieght and prevent buildups that would be unpleasant if they escaped at ground level.

If that does not represent a reasonable power source, and to grandfather in existing answers, it would also be interesting to know how much power can be supplied per person via small-scale residential bioreactors. And if coupled with a municipal sewer system, could that sort of preprocessing represent a practical method of reducing strain on said municipal sewer and wastewater treatment systems?

Based on this statistics I have found with an internet search, the average person in USA produces 221 pounds of food waste, 92 pounds of yard trimmings and 854 pounds of wood waste per year.

Instead of converting it to methane and burning the methane, let's say you directly burn everything to get an estimate of how much energy you can produce daily per person.

This isn't a hypothetical idea; it's actually in use here and now, both at the industrial level and for smaller residential use.

Here's an example in India for instance An Experiment in Odisha to Tap a Underused Fuel Source - Human Waste!:

Converting human waste into energy is not a new idea, but social acceptance has been a problem in India. So, when Father Joseph Philip showed interest in constructing toilet-based biogas units; we believed that the time had come to put the idea into action.

Father Joseph runs a hostel for 80 tribal boys in Duburi, a village in the Jajapur district of Odisha. We had previously set up two small biogas units for him, but these were run on cow dung, a well-accepted source of energy. Using biogas created from human waste was a different challenge, but, fortunately, we had the full support of Father Joseph.
… 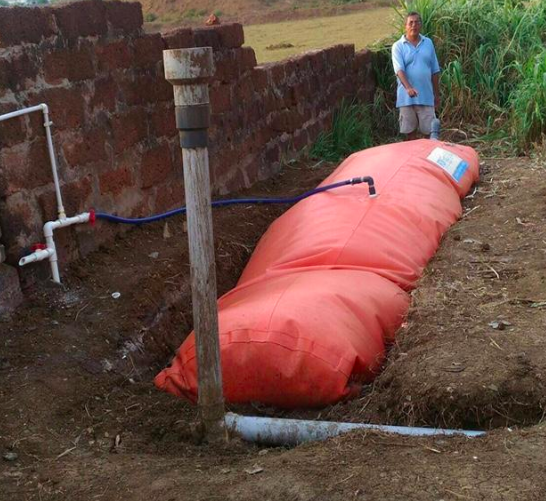 …
We see great possibilities for toilet biogas across the country. We believe this idea can be expanded across India, and our slogan is “The energy of 1.3 billion people should not go to waste!”

Search Google for "biogas" for many other examples and details.

Not the answer you're looking for? Browse other questions tagged science-based energy .