In an effort to gain inspiration for planetary formation and, at the same time, inspiration for governmental/territorial boundaries between residents of said formed planets, I've recently encountered a natural linear format (I won't say which, to avoid biasing answers) that is much longer than I ever expected for a natural formation. This got me wondering: Just how long can a linear natural formation actually be? or an alternative wording might be: What is the longest naturally formed linear structure known to science?

Some clarifications and definitions:

"Natural" just means not man-made. Plant-made or non-human-animal made is fair game, as are structures formed by natural/geological processes.

"Structure" There must be a solid component involved. The striped gasses of Jupiter, or the rings of Saturn, for example, are not valid, despite the likelihood that crystals of various ices are present, the gaps between said crystals break the "structure" in to smaller pieces, so it is not a complete single structure.

"Linear" is not meant to be taken in the literal mathematical sense, as this would imply something that has no width, depth, or even mass. Instead, it should be understood to mean that the structure follows a relatively straight line, from start the finish. Deviation to follow the curvature of the Earth or other planet or moon (if the structure is not on Earth), is allowed, when applicable. I'm hesitant to place a more strict definition on it, but something that came to mind is that it should not waiver more than its own width off of it's centerline, but this might be overly restrictive, for example if a river is 1 mile wide, and you draw a line from the start point to the end point, then neither bank of the river should be farther than 1.5 miles from that centerline in order for t to be considered linear. Again, that's just something that seems somewhat reasonable to me, but can be taken with a grain of salt and argued if a particularly promising structure deviates slightly more than that. It should be linear as viewed by the naked human eye, assuming proper perspective viewing angle (even if that means it must be seen from space to see that it's linear) EDIT I think this section needs a bit more clarification, though it might only make it more vague. I'll provide some examples of things that I would consider close enough to 'linear' for me to accept, given a convincing argument and/or description, etc: The Baja peninsula, the Gulf of California, the Red Sea, or the west coast of Chile. Of those examples, the Baja peninsula is probably the least linear because of that point about halfway that sticks out to the west.

"Structure" or "Formation". I can't imagine a comprehensive list is possible, but things that came to mind as examples of what I'm referring to are Rivers/Riverbanks, Coastlines, Mountain Ranges, Cliffs/ridgelines, Glaciers, Caves. Canyons (with or without the presences of surrounding mountains)

I would have to go with Saturn's moon, Iapetus. Iapetus has a mountain range all the way around its 1500 km equator:

The current theory is that it is a collapsed ring that once cirlced Iapetus.

Continents as a whole have a lot of variation in height, but tje ice on the poles is mostly flat. Almost every picture of anywhere on Antarctica looks like an endless plain until the horizon. So except for a big ridge it has off center, you could day a line from shore to shore is mostly linear.

Sputnik Planitia in Pluto is 1/15 the size of the South Pole, but is flatter.

I would probably say the Atlantic mid-ocean ridge. It's not perfectly linear, but it follows almost the exact midpoint of the Atlantic Ocean from the tip of South America all the way to the Arctic Circle. That's almost 16,000 kilometers. 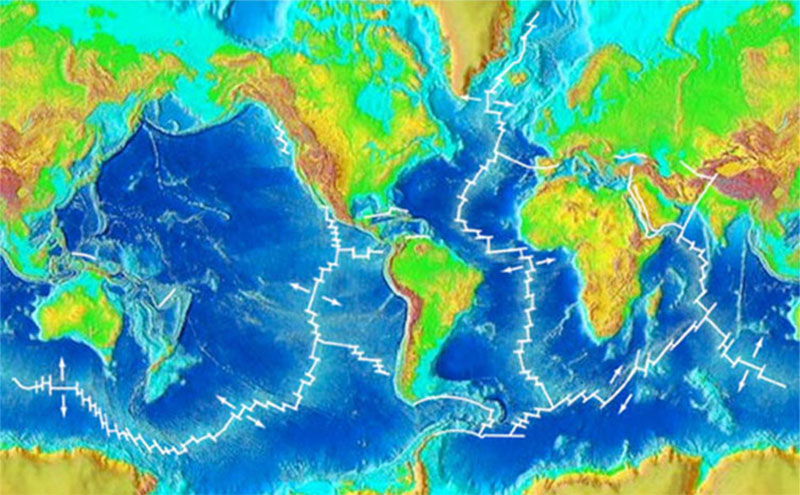 9
Repulsive Universe
11
Natural subterranean cave formations on Mars
9
How thick should the roof of a large cave be to safely build a city on top of it?
12
Shatoum: The Granite Citadel
7
Are there any plausible 'alternative' methods of planetary formation?
8
Where to Put Self-Reliant, Rugged Individualists?
2
Optimal geography for a thriving caldera centered civilisation?
3
Where would rivers and lakes make sense on this continent?
5
How to plausibly justify a species growing mineral-based protrusions that resemble horns or spikes?
0
Will nature after millennia create a temperate rain-forest in my structure?