Is the data storage based on magnetic threads instead of magnetic tape possible and practical?

Particularly, magnetic thread cassetes with endless loop (which is easier with thread than with tape).

I am asking about a thread storage because it is possible to bend the thread in multiple 3D directions, for instance, allowing it to pass multiple times through the head, connect bottom of one reel to the top of another etc.

There were wire recorders prior to 1940 (the only recording we have of Hitler's natural speaking voice is on a wire recording from, IIRC, 1938).

These have significant limitations for data storage, but could be made to work, more or less. First limitation is single channel recording -- with effectively a one-dimensional medium, you can't even record once each direction. All data will be serial, not even 8 bits wide (plus a parity bit) as on 9-track tape of whatever size. Transport would generally be slowish, and seek wouldn't be much faster (2x or 3x was about what you got with fast forward or rewind on wire recorders, though that might be improved).

Worst, the wire was a bit fragile -- with voice, it just made a little "click" where you spliced the broken wire ends together, but with data, it would cause frame errors and other mayhem. Not practical, in my opinion.

To expand Zeiss Ikon reply, metal wire data storage devices existed at some point in the late 40's (according to this Ars technica article, you can see them in "The Thing"). One would argue that the first use of these kind of devices (in 1898) was precisely data storage: the first patent covers a telegraph log recorder. Voice dictation would come after the invention of the microphone. 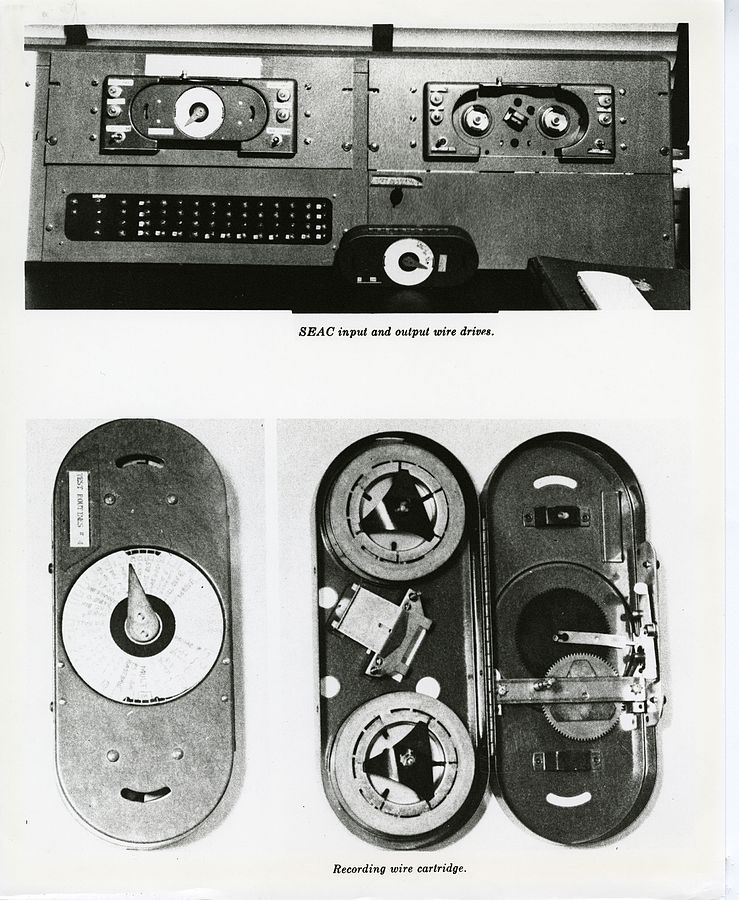 Both devices are known for one thing: unreliability. Thread is very thin and prone to breakage, and looping devices (of any nature) can tangle and break, too.

So combining both is not a very good idea.

So, is possible? yes, and is perfect if your novel is set in the 40's or earlier.

Is practical? not much. There's a good reason we stopped using them. Information density is not good and they are prone to breakages. It may be slightly easier to manufacture, but not much more than tape.

Edit: I would add that one could argue that magnetic platters are the pinnacle of magnetic wire storage: it is, after all, a series of concentric rings of magnetic loop, fused so they can spin faster than any wire would do, but that's outside the scope of the question ;)

Edit2: In general you want as less moving pieces as possible. That's why we moved from tapes to disks and from discs to solid state devices :)

Maybe not thread, exactly, but steel wire, yes. Introduced in 1898 by its inventor Valdemar Poulsen, and now obsolete by at least two generations of tech. One being magnetic tape, and another digital recording directly onto mass storage devices. And now possibly you want to call things like solid state hard drives and USB thumb drives another "half" generation.

Also, eight track tape came in an endless loop. The tape was pulled from the center of the reel, and wound back on the outside. Eight tracks were not a product that had "legs" in the market. They were around for a while then people stopped making them. Rewinding was a bit of an issue with this design. And a cassette was likely to fail after a dishearteningly small number of plays because of the scraping and bending the tape went through.

Not the answer you're looking for? Browse other questions tagged technology data-storage or ask your own question.

4
Data Storage and Access during a Slow Apocalypse
7
Alternative for magnetic boots
4
Write once perpetual storage, is such a thing possible?
10
Long Term Zircon Data Storage
3
How much data storage is needed for a blueprint used by a replicator?
45
What is a recently obsolete computer storage device that would be significantly difficult to extract data from?
2
A dense and reliable data storage for human brainscans?
20
30 year groundhogs day: how to increase the world's technology