Would a "working deer" living in cities with hard paved or cobbled stone ground need "deershoes"? The deer are mainly used for light work: no heavy lifting or pulling.

Would unchanged deer feet and hoof anatomy allow for the same type of shoeing as horse hooves (nailing) or would they just need something else?

While most of the concern is on the hoof’s quality and protection with it striking hard rock nearly all day every day. Concern is also for the general balance and support of the body, as they’ve got a lot less area for balance on slippery flat streets when compared to horses with their dinner plate hooves and great weight.

(And to note this question is not about how good deer would actually be for anything in the city or any other concern of why or how they’re there in the first place. This question is literally just about the hooves. The rest is for another question another time.)

behold the ox shoe or sometimes called cow shoes. Traditionally made for plow oxen. They come in a fair variety of shapes but the most common is shown below. Note modern farriers often attach them (and horseshoes) with epoxy instead of nails, less risk of damaging the hoof, also a lot easier. 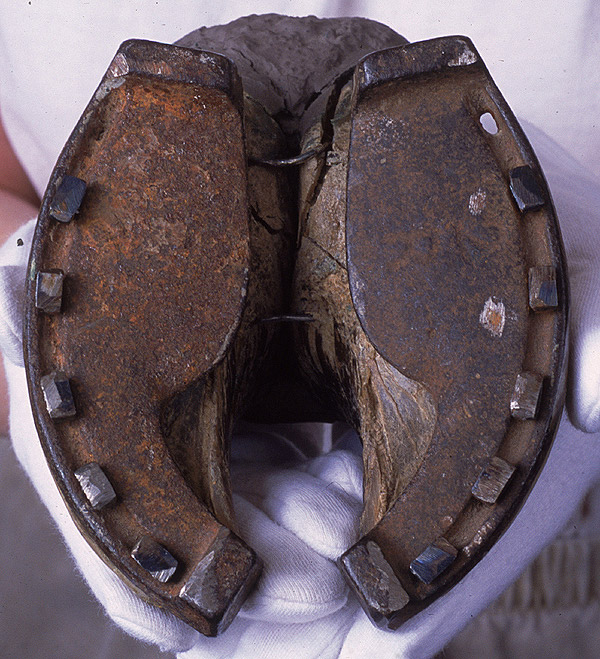 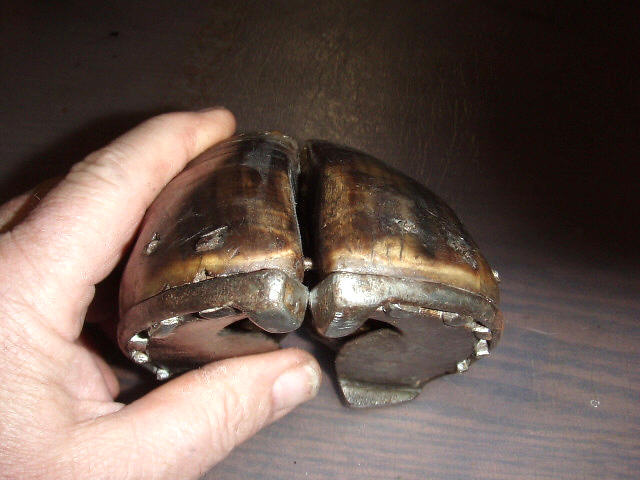 But there is a problem

If they are commonly walking on concrete or asphalt modern farriers prefer softer hard plastic shoes with textured surfaces, because an iron shoe on a hard wet surface has very little traction. plastic shoes reduce shock and improve traction. 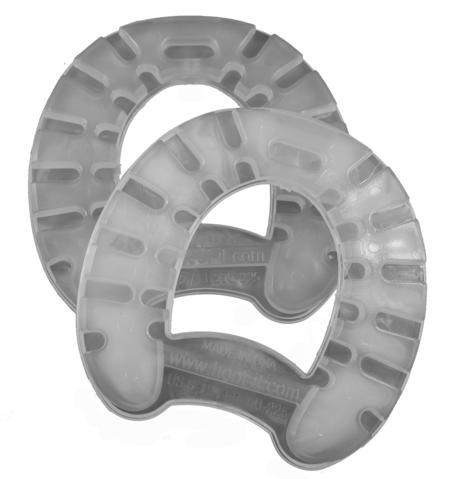 Oxen have been shod for centuries -- mainly the ones who pull carts on paved roads (cobblestones), though plow oxen are also shod. Ordinary horseshoes won't work on cloven hooves, but ox shoes are designed for cloven hoofs. The issue that might arise is that deer (whitetails, wapiti, moose, etc.) have narrower hooves and are much lighter animals (even moos) than oxen. The shoe would require some modification, but any relative of common deer ought to be possible to shoe if the animal is well domesticated (i.e. calm enough for the farrier to handle as needed).

Worth noting that reindeer (domesticated caribou) aren't shod; despite having hooves, they, like camels, actually walk on a pad behind the visible hoof, and as a result, don't need shoes and cannot benefit from them.

Considering how giggly are deer when walking on wet paved roads (based on the footage I can see on the internet), shoes are surely needed to improve grip.

Artiodactyls are even-toed ungulates, meaning that these species have an even number of digits on each foot. Ruminants, with two main digits, are the largest group. Examples include deer, bison, cattle, goats and sheep. Perissodactyls have an odd number of toes. Examples of perissodactyl mammals are horses, rhinoceroses and tapirs.

You can use horseshoes for deer the same way they are used for horses, you only need to adjust for the two main digits instead of the single one found in horses.

33
Are hoofed bipeds feasible?
2
The Reindeer--Let's Get Real, Shall We?
5
What would the size constraints on my creature be?
6
Is it plausible for a being to possess a singular halo-shaped 'horn', while other members of the species possess two 'regular horns'?
6
What different biological aspects would facilitate an elite race of warrior aliens?
5
Can fallow deer be used for milk?
3
Realistic speedster build
4
What would be the best design for a a versatile humanoid leg, but at the same time pretty good in every function (universal leg)?