How Close Can We Build Solar Collectors to the Sun?

Say you've got a space-faring civilization that needs a LOT of power. Sure, fusion is a thing, but there's really not that much helium-3 to be found in our solar system, and it's hard to get. So the best way to get gargantuan quantities of energy is to start on a Dyson swarm. We don't need the whole thing, just enough collector stations to meet current demand, whatever that might be. But if collected energy is a limiting factor to any of our endeavors, then we want to maximize our power generation for the smallest possible cost, which means we'll want to get closer to the sun than we are now, so the sunlight is more intense. The question is, how close can we get? How close is it practical to get?

Presumably, if we get too close, any station we built would need to spend an inordinate amount of mass on radiators and other systems to keep itself cool. Where do you think that point is?

At Earth's distance from the sun, we get about 1360 watts per square meter from the sun. At Mercury's orbit, we get about 9000. One suggestion for building a Dyson sphere is to mine Mercury for the raw materials and put the satellites (which would mostly be giant mirrors reflecting to central collecting stations). Could we get closer? Is Mercury already too close? Or is it just right?

EDIT2: Let's also assume that we're not restricted to solar panels; we could also be using mirrors that redirect light to a central boiler, or other means of collecting solar power.

Your problem isn't generation; it's storage.

Ultimately, wherever you put your solar generators or collectors, your efficiency over the long term isn't going to change all that much. Modern photovoltaics actually break down a little in hot environments and you'll find that collecting the sun's energy in the long term is a tradeoff between the power you can harvest and the longevity of the collection device.

So, you could build around Mercury, but that presents its own challenges. If the collectors wear out faster, how do you maintain them? Besides, the amount of solar energy that you can collect even near the earth would be sufficient for most needs, provided you can even out the peaks and troughs in demand. This is actually your real problem; the sun is in an 'always on' mode, and you need your energy delivery to be more flexible than that for those few high-draw tasks that ramp up your energy needs, like launching ships into space.

Whatever shall we do?

With normal domestic and industrial energy consumption, it is handled with 'Just In Time' power generation; in other words, we know when power is most likely to be used, and we know that many users are generally evening out the overall needs, and further, we price electricity differently in non-peak times to even out the needs and encourage people to use power more evenly throughout the entire day. This means that we start up and shut down different generators as the needs on the grid change in real time.

We can do the same thing with launching our space ships; launch them from all over the globe at different times, say 10am local time at each location. But, the real answer is probably batteries.

As parts of the globe transition to sustainable generation techniques like solar and wind power, industrial batteries are fast becoming a part of the power mix for countries adopting sustainable techniques. This is because you can't just start up another south wind or another sun to meet demand in your country, you have to capture the energy when it is available and release it on demand. Batteries are the obvious solution to this.

Arguably, the primary limitation in your battery storage is rare earths that have become an essential ingredient in most industrial battery designs. These rare earths might be easier to come by than He3, but their extraction is a very toxic process in most cases.

Perhaps we could mine Mars for them? You need a spacesuit to live and work there already so it doubles as protection from toxins in your mine, and you should be able to pull a large number of these out of the ground to supply you with enough battery storage to support your peak draws from your constant generation from solar, wherever you put it.

Ultimately, this concept of industrial batteries is the biggest fundamental shift in energy thinking that we need to accept if we are to take sustainable generation seriously. The advantage of coal, nuclear, fusion etc. is that we can generate as needed, but we can't do that with solar power. Batteries however give us the flexibility to divorce generation from demand in a useful manner.

The downside however is that there is a word for a device that stores highly dense energy if it is capable of some form of uncontrolled release;

The batteries we are talking about are not simple to build, and even harder to safely manage and maintain, but they do solve the problem of taking your generated energy and keeping it ready for direct use.

Edit, or Reflecting on Changes to the Question;

The question of whether or not a reflection based heat collector would fare better closer in is an interesting one so let me add to my answer to address it.

In theory, the closer you get to the sun, the more 'dense' the energy that can be reflected back into a central heat reservoir, therefore the smaller the reflection array you need to reach the optimum heat levels.

In practice, visible light is an infinitesimally small percentage of the entire EM spectrum, and most materials are not reflective to it all. What that means is that while your 'mirrors' can reflect more of that spectrum into your heat reservoir, there is ALSO more that is absorbed by the mirror in the ranges that are not reflected, heating it up. So, arguably your maintenance periods contract as well.

Whether or not the maintenance period halves as the density doubles is the big question and I don't have any figures on that although I do plan to capture them next time I'm building heat reservoir generators at varying distances from the sun.

But; ultimately it comes down to a simple variable; if the lifetime of the array is reduced by LESS than the increase in generation, move your arrays closer. If the lifetime is reduced by MORE, them move them back. Because the density of energy reduces by some exponential measure as distance from the sun increases, my guess is there is a 'sweet spot' at which you gain energy at the highest density to degradation ratio, but I'll admit without detailed schematics and two year's research in material sciences, I have no idea where that sweet spot is.

Instead of solar cells that

I would use mirrors that:

You know how solar cooking works: 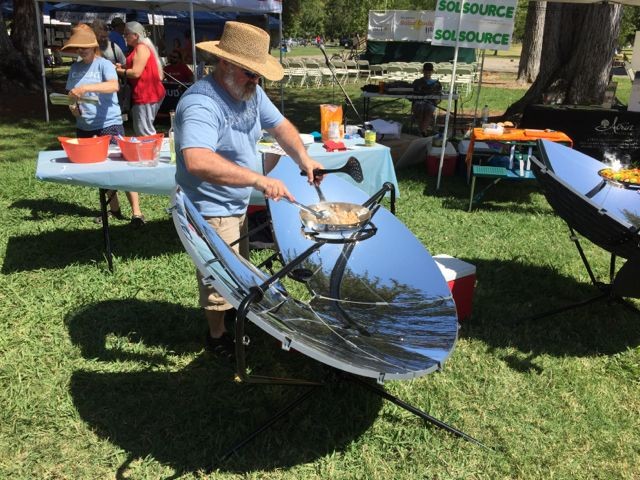 So you build a huge mirror array. You can build it to completely sourround the Sun, if you want to collect all the Sun's energy. All you need to do is leave a small hole in the direction of Earth for the sunlight that you want to continue to shine on our planet. The mirror array rotates around the Sun at the same speed as the Earth, so the small hole always faces Earth. The mirrors direct the sunlight to wherever you need energy, focussing all of the emitted energy of the Sun into one single tiny spot, giving you vast amounts of energy that you can either use directly as heat or transform into electricity.

18
How much stuff could we get into Earth orbit for the start-up cost of initiating asteroid mining?
11
How close to the Sun would you have to be to hear it?
4
How fast could we build a Dyson Swarm?
6
How would a civilization protect a Dyson swarm from solar flares and coronal mass ejections?
7
How best to arrange a network of light-focusing satellites closely orbiting the sun
38
What would happen to a star if most of its energy were reflected back at it?
9
Would a hollowed out world be mechanically stable?
5
Lift 10 Billion Tons of Material From a Planet (Every Second)