Handheld Speargun used out of water for manhunting

Can I have a character make use of a handheld speargun in a postapocalyptic setting to shoot people and pull them back (or at least retain them) with the gun's cord?

I came across some criteria/problems that might influence how useful this weapon might be and hence how this question might be answered if someone has information on them:

It is an ineffective weapon for capturing slaves on many levels

When you launch an arrow, there is a lot of resistance from inertia, but once it's up to speed, there is very little drag to slow it down in atmosphere. This is why a bow and arrow can pierce a target from far away with little more energy than you would need to thrust the arrow into something at point blank. Once, you attach a cord to the arrow, it applies continuous and incrementally increasing resistance as it leaves the bow. The spool pulls back at the arrow, and the weight of the unraveling cord adds additional drag, the more it unravels. This very significantly decreases the effective range of the weapon to only a few meters before the missile is moving too slowly to sink it's barbs deep enough to catch flesh.

In water, attaching a rope to a harpoon this is less of a concern because the water already has such high resistance that you aren't expecting much range anyway, but in air, the difference is pretty extreme.

Unable to drag a live person:

Another consideration is that a cord strong enough to pull a live person back with is also going to be pretty heavy. A harpoon is designed to keep the fish you killed from sinking, it is not meant to pull back live prey. Most human sized fish can be pulled in with a thin, lightweight line rated for 20-50lb of resistance, but a full grown human running away at full speed will exert hundreds of pounds of pull between their mass and momentum snapping even the heaviest of fishing lines. In a world without modern industry, making your own line that can overcome a moving human's inertia light enough to be pulled by a harpoon is not going to be easy. It is also likely that a person's inneria will be more than enough to rip out the harpoon when you try to yank them back.

Slaves are worth more alive than dead:

While there are psychological advantages to keeping your slaves afraid to run away, the kind of wounds a barbed harpoon can do are so maiming, that even a shot to the leg or arm will likely make your victims bleed out and die pretty quickly. At this point, you are better off just ditching the rope and using the spear gun as a killing weapon for the better range.

Modify the spear gun to be a bolas launcher. Where a harpoon must impact at high speeds to pierce a target, a bolas can wrap around and capture a target at much lower speeds meaning that your drag-line will have less effect on the weapon's effective range. A bolas also becomes more secure the harder you pull against it, and does not kill your victim making it a better tool for actually capturing people.

While this does not have have the psychological advantages of harpoon gun, that does not mean it could not be made to be more inhumane. By binding your bolas balls with barbed wire or razor wire, you would not only improve your weapon's grip, but cause some very nasty lacerations as you drag them in. These laceractions would be very painful, visually disturbing, and cause scarring that would serve as a permanent reminder of what happens when you run, but the cuts would be mostly surface level meaning that your slave should be fit to resume his duties within a few days.

On a final note: Slavery is not about being cruel, it is about making money and offsetting risks. This is an important factor when trying to write a believable story about slavery. While many slaves did die as part of the American slave trade, it was almost never resulting from cruelty for cruelty sake. Slavers were businessmen. If they could transport 50 slaves and arrive with 50 slaves alive, or transport 200 slaves and arrive with 150 slaves alive, then they would measure the profit margins of each scenario and make their choices accordingly. The outcome was brutal, but that was not their goal, just a side-effect. Likewise, whatever tools and weapons your slavers use will be based on what is most profitable. Humaninely capturing a slave, then thoughtfully torturing him in such a manner that he remains fit to work hours later creates much more foreboding and feelings of powerlessness than seeing someone dragged in with a spear in his leg. It is powerlessness and not fear that controls people. Powerlessness is where the profits are.

My speargun is pneumatic. Manual strongly advises against using outside water because there is no resistance (from water) to keep its piston from harming itself. That can probably be addressed by having a spring on the end stroke.

Now, can it or its rubber band cousin work as dry land weapons?

Long version: their range/effectiveness primarily depend on providing them enough potential energy (air pressure, rubber bands). A ballista can be placed somewhere between a crossbow and a rubber speargun. The one in the picture below could work underwater: 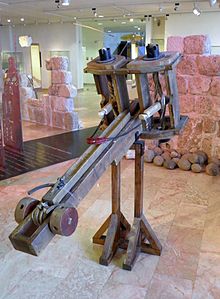 If you replace the main tube in my pneumatic speargun with a nice steel pipe you scavenged somewhere (will need to polish the inside to protect the o-ring), you can probably increase its pressure a lot. There will be a point you will need to rethink how the piston seals it but there are enough examples out there of air pistols handling 1000psi or higher with rubber seals to build upon. By then you are redesigning the speargun, which you would in a survival situation if that is your only weapon and you have a source of parts. However, you would have to consider different settings for different applications: underwater you want the projectile to move slower than in air or it will not go very far (rifle bullets don't go very far under water because of their speed).

Air powered weapons can be designed to be quite effective; remember that the weapon Laws and Clark had the natives feared/respected the most was their Girandoni air rifle, which with its 20 round (fed from a tube) capacity before recharging and 150yd lethal range was possibly the first magazine-fed repetition rifle (as opposite to single shot) in service in North America. Your garden-variety compressed air spear gun or pump air rifle operate at much lesser pressures; modern materials can address that. The main difference between speargun and air rifle is weight of projectile; that is nothing but an energy issue that can be addressed by someone with mechanical knowledge, patience, and stuff gathered in a farm or town.

Other thing you could do is use arrows/bolts instead of speargun spears as projectile because of weight and tip options.

Now, the other important question is: can a garden variety speargun you found on an abandoned boat be a postapocalyptic weapon as-is? It depends. Are you trying to reach enemies a mile away? Not a chance on a stock speargun. Throwing a spear or even an arrow at Girandoni's distance will also not be doable with stock speargun. Are you setting said spearguns as traps inside a room like the Rust game? Completely doable.

Using a standard speargun as basis to something more, well, steampunk? Now that is another story; I am picturing now a boiler providing steam for many high pressure reloadable (I think the Chinese did something like that which was crank operated) speargun/ballista-like machines guarding a castle/tower.

Not the answer you're looking for? Browse other questions tagged reality-check physics weapons firearms slavery or ask your own question.

5
Quadrablade! Will it work?
12
Shooting non-lethal projectiles with long strings attached?
39
How to realistically create a bow that's also two one-handed swords?
1
Sustainable firearm production?
41
The gun which makes no sound
6
Post-apocalyptic aircraft
7
Is my plasma weapon design any good?
5
Indispensable tools for scavenging
7
Space Combat Depiction 1: Laser Pew-Pew
2
A missile that's launched from "small' flying dragons. How can it take advantage of that?