Yet another low-tech device alert

After seeing this question, a similar but IMO harder question came into my mind: what if the magical alert is non-mechanical?

Similar plot, low/mid-tech world, no industrial electricity, steam engine exists (unless necessary). The only magical thing in this world is this so called Yet Another Low-tech Device Alert, or YALDA. Pocket watch size and shape, YALDA can alert a user in the presence of certain dangers, like Orcs and Goblins.

What can YALDA do? When Orcs/Goblins are miles away, YALDA will:

So it's basically an pineApple Watch which alerts people visually.

With this setting in mind, how could you design a mechanism so that the signal could be amplified? Please try not to use trained animals including human, what would be the fun in that ;)

Edit: this question is NOT seeking for the design of an Orc/Goblin detector.

Assume it already exist, and assume it's exactly how Sting in LoTR works. The main purpose is to design a mechanism so that, even if you are not staring at it, you can somehow be notified.

Also, removed Audio/Thermal possibility, as it's too broad.

Update: we have the detector, we want to make it louder.

Sting has the magical ability to detect orcs or goblins nearby, glowing blue in their presence,

So, we now need something to react to the blue light.

We get our trusted glass vial, but now we tinge it brown and fill it with a silver halide solution, in which the Sting is placed.

As soon as the Sting glows blue, the silver halide will decompose and the pH of the solution will decrease. This can be used to trigger several possible reactions, from the classic litmus test (which has no advantages - you still need to look at it) to non-reversible electrochemical reactions (unfortunately, too weak to be useable - you couldn't drive an electromagnet and build a ringer) or even explosive ones. Hydrogen gas development is easy, and its pressure could be used to audibly "pop" a fragile enough diaphragm.

The amplification is one-shot: after it has been triggered, the solution and any irreversible component has to be replaced.

Pocket watch size and shape, YALDA can alert a user in the presence of certain dangers, like Orcs and Goblins.

I think that the least difficult possibility is going with chemistry. Orcs and goblins give off a particular chemical that is otherwise rare. It is well known that both Orcs and Goblins give off a characteristic milk-curdling pong, but a less well known fact is that they also give off a odour that humans cannot smell. This, too, is otherwise strong enough to precipitate a chain reaction whose results can be observed.

The "Orc detector" is then a stoppered glass vial three quarters filled with a clear, bluish liquid. To use, unstopper the vial and wave the stopper in the air three or four times, then plug it back and shake the resealed vial for some seconds. If nothing happens, the odour intensity is less than 0.05 orcs/fathom (one orc at about 37 m is enough to trigger the device; two orcs can be detected at double the distance; orcs' hygienic habits and diet as well as recent rains unto unprotected orcs might impair detection).

If small white specks of snow appear in the liquid, an orc is nearby. The intensity of the snowfall gives a rough estimate of orc number and distance.

When the liquid turns completely clear, the chemicals are exhausted and the detector must be recharged/regenerated.

Another type of detector relies on the orcs being first-generation orcs from the Forbidden Plains, where the horizon is said to glow blue at night and the air itself is poisonous, bringing wasting diseases, blindness and child and cattle malformations.

It is again a stoppered glass vial in which two thin gold foils are hung from a copper hinge, which is driven through the stopper. You rub a glass and copper wand against a wool strip, then touch it to the outer copper knob until the two gold foils suddenly jump away from each other. Take notice of their position and keep the vial still. If the foils stay rigid, you're safe. If they slowly go limp and hung together, there's Orcish stuff nearby - it could be just the buried remains of a campsite, or a tomb, or a corpse. The detector is non-directional.

Orcs and goblins born and raised outside their ancestral homeland do not trigger the detector.

This detector is actually an expedient Lauritsen electroscope. It works as long as the Orcs give off enough radiations. It might be that Orcs are actually genetically mutated humans. 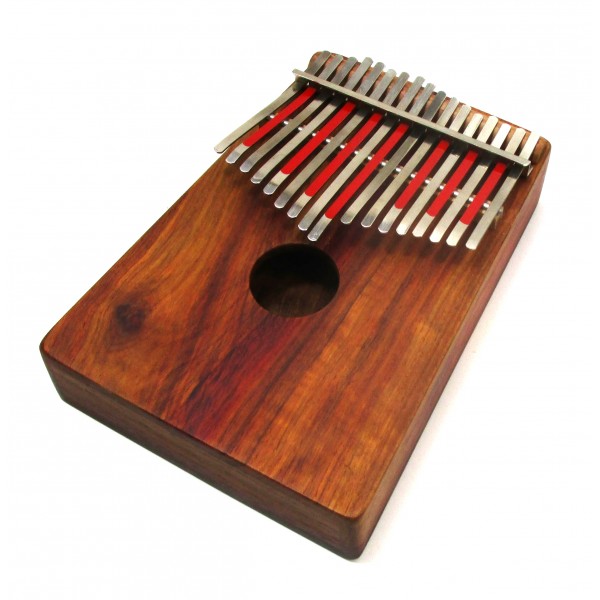 A resonator or resonating chamber is a low tech way to amplify the sound of a vibration. Depicted is a kalimba which I chose because it is about the size you are looking for. The box with the hole is a resonator and the sound is produced by the metal blades. Lots of instruments use resonators including every stringed instrument I can think of, all of which are more or less boxes with holes.

Per the question, the existing alert is purely visual -- a change in color, intensity, or pattern of emitted light.

What's needed is something that reacts to light, and produces a stronger stimulus -- either a much brighter light, a sound, a vibration, or something else that will alert the wearer when they might not notice the change in the device's dial.

Obviously, with a barely-steam engine tech level, we won't have things like photocells. There were chemical methods of detecting very faint light as early as the 1840s (long exposure Daguerreotypes), but they take a long time, both for exposure and for processing, making them decidedly an "after the fact" detection enhancement (rather like a film dosimeter).

Depending on the wavelength of light, a vial filled with hydrogen and chlorine, mounted against the dial and protected from outside light, might provide a "bang" on a sudden increase in intensity -- but this is a bit hazardous, prone to false alarms (the slightest exposure to sunlight will set it off, as will static discharges) and would depend on enough UV in the emission spectrum.

The mount might resemble the ones used to put auxiliary lenses on a watchmaker's eyeglasses, or to mount a rear view mirror on a bicyclist's goggles, or it could be more idiosyncratic.

Not the answer you're looking for? Browse other questions tagged science-based technology medieval or ask your own question.

5
How would a low-tech device be able to alert its user?

5
Background for hi-tech in low tech
11
Low-tech inertial dampener options
6
Low-tech Underwater Weaponry
15
How to improve manorial living with modern low-tech innovations?
7
Planet of the Aves: Low tech Weaponry
5
How would a low-tech device be able to alert its user?
13
Ideal Firearms for time travel or low tech universe exploration