Is a gigantic laser facility with a reflector network as defensive system plausible?

In my setting, there are sectors in a statist union that take a role of defending union's asset, so the military doctrines in those sectors are designed around defending their own sectors. One of their defensive system is orbital laser network, in which they use multiple ground-based facilities powered by 6-8 nuclear power plants. Each emits a powerful laser beam at a reflector in orbit; the total power emitted is 17,000 megawatts. The beam is then reflected into the next reflector and so on until the laser is unleashed onto the target in the atmosphere or on the Earth's surface (the laser can travel 1500 miles, but will zig-zag 1000 miles at least).

The problem I have is that my setting take place around 200 years from now and this orbital laser system supposed to fall into the hard-science portion of the story. So I'm not sure if such system is believable or not. Will the reflector lens be able to take such a powerful laser to destroy jet fighters or even a dozen of MBTs? Will the laser even be able to leash its target? Will 7 nuclear powerplants enough to power this system?

During the 1980's, the American Strategic Defense Initiative studied using laser weapons to defend against ICBM's. Since the powerplant, cooling system, optical trains etc. are large and massive, launching laser weapons in space was considered to be a non viable option, but a massive ground installation only could strike targets in line of sight.

This led to the consideration of "fighting mirrors", which would be launched into Low Earth Orbit (or in extremity, on a ballistic trajectory), which would reflect the beam to the target over the horizon from the ground installation. A secondary benefit was the mirror could possibly be used to refocus the beam once it passed through the atmosphere, bringing it back into sharp enough focus to damage or destroy targets. 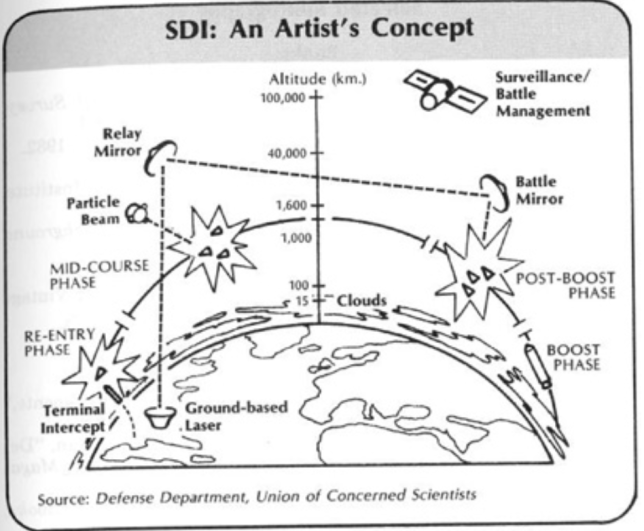 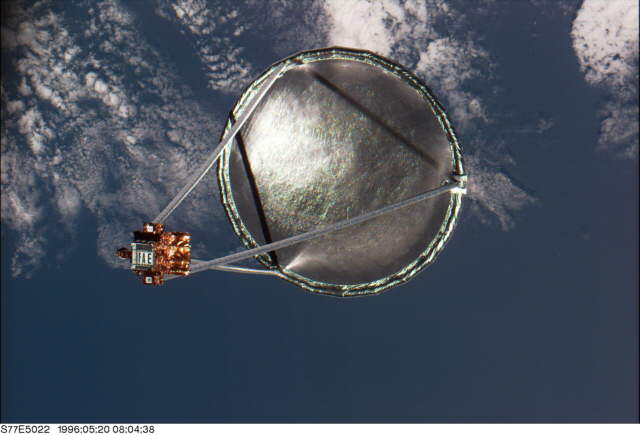 APOD experiment. While not optical quality, this mirror gives you an idea of what the system might look like deployed.

Now the laser was meant to strike missiles in space, and most illustrations only envision one or two laser mirrors. Given the massive amount of laser energy, the lack of cooling systems on the lightweight mirrors and speed of engagement, I suspect the mirrors were meant to be sacrificed with each shot, since even absorbing a tiny percentage of the laser energy would likely destroy the mirror. Even if the mirror wasn't sacrificial, it seems prudent to rotate the laser to different mirror sets so each mirror has time to cool and retarget.

So the system you envision was designed a long time ago, and works mostly as you think, except that the laser beam is transmitted outside the atmosphere to strike targets in space. Attempting to strike ground targets would require the beam to pass through the atmosphere again, leading to issues like thermal blooming and other optical degradation of the beam, so this does not seem to have been considered at the time.

The key element is to minimize the number of times the beam has to be "handed off", since it will lose energy each time it is reflected, and to only pass through the atmosphere once. Indeed, if the laser installation is powerful enough, the beam might trigger the atmosphere to break down into a plasma, which absorbs the beam (and runs down the beam like a lightning bolt to the optical train), so there are definite boundaries to laser energy as well.

This is likely not to be the answer but I will try to get some data down from what is given. Maybe some of that will help.

High Energy laser in atmosphere will be impacted mostly by the atmosphere. The biggest problem is due to thermal blooming. As result of the energy absorption the air gets heated and result in the bending of the light. To top this off you have effects of the wind that is additionally affecting your medium. It might be possible to compensate to some degree such effect but the examples given are most likely mir though for ground air target situation where you have some sort of feedback to adjust your beam on. If this will still work through clouds and such while going zigzag will be difficult and would probably require the mirrors in space to be adjusted. So you won’t have simple one piece mirrors. Another option is to pulse the laser but this might reduce the overall power or need quite big capacitors what in itself won’t be easy I presume. The secondary problem is scattering that will always reduce your beam power to some extend.

That said as you have to go through the atmosphere twice you will have twice the problem. It might be better to place those laser into space from the beginning?

There is no perfect mirror as in the link given they talk about something like 99.999%. Yet any small imperfection ect might lead to damages to your surface. Considering that your mirrors are in space and open to damage through strong radiation and particles those mirrors might not hold long and have to be safely secured when not in use. This will however not help with any unwanted absorption going to happen. And even if we are talking about 0.0001% we are still talking about a considerable amount of power transferred to your optics. With 10GW you might still transfer 10kw into your mirror System what is quite a lot. But now your system has more than one Mirror involved and if only one fails your howl weapon system becomes unusable.

In comparison the HEL system

Not the answer you're looking for? Browse other questions tagged science-based reality-check science-fiction military or ask your own question.

57
Would a fighter pilot with an invincible space ship be able to conquer the galaxy?
0
How does a spacecraft attempt an intercept course with a hostile one realistically (Part I)?
26
Infantry weapons, or why are there people running around down there anyway?
6
Stellaser Part I: Trial by stellar Fire or The best design out of three for a solar powered 5 Petawatt laser?
61
My perfect evil overlord plan… or is it?
6
Are laser-stars the better missile carriers in space warfare?
3
Humanity is an FTL capable empire with great technological capabilities, what will our fighting machine or machines be like?
19
How to kill an alien with a decentralized organ system?