The whomping willow is a fictional tree from the Harry Potter series of books. It is a magic willow that can move its branches to punch people who come close to it.

Small animals such as cats and rats can approach without much worry; Anything human-sized or larger gets whacked. As for how strongly it can punch, one of the books has this quote in it:

"People used to play a game, trying to get near enough to touch the trunk. In the end, a boy called Davey Gudgeon nearly lost an eye, and we were forbidden to go near it."

It also has a small knot near the base. Pressing it causes the tree to become immobilised, at least for a few moments, so it is safe to stay close to it. I don't think the books ever mention how long that lasts.

What I would like to know is the closest thing to that we could have, in a fictional world, without magic (hence the science-based tag). Doesn't have to be a plant per se: it can be a fungus or anemone. It just needs to be a living, sessile thing.

It's desperately avoiding the grasp of a nearby sea star, which is interesting but not what we're interested in. Rather, notice how it bends its ring of tentacles nearly all the way to the ground.

What if this wasn't a defensive mechanism, but rather an offensive one? Our supersized land anemones would remain quietly waiting until they detect prey pesky teenagers, either by touch or through the network of symbionts surrounding them. Once triggered, the entire crown of the tree, full of tentacles and the anemone's nematocysts, would smash down upon the prey.

It'll take a some handwaving to make this happen, but that's mainly to do with the transition of the anemone from sea to land. Anemones are supported by water pressure, so our land versions would only be found in the dampest areas such as swamps.

It's quite possible to imagine an anemone that ends up looking like a tree, especially if it's a strong evolutionary pressure. The stalk of the anemone might become tough, leathery and brown simply by drying out, giving a very bark-like texture. On land, zooxanthellae can be much more helpful given the higher intensity of sunlight, so they'd proliferate wildly. However, these symbionts are brown algae, so the tree canopy would remain a brownish golden color all year long

As for the prey size requirements, the anemone is unlikely to notice small organisms relative to tree height, and would therefore only trigger once a certain size threshold is exceeded. That just happens to be the size difference between small animals and humans.

Heliozoans are a class of aquatic predators that look like underwater spikeballs: 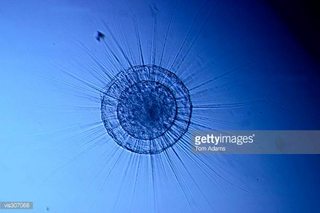 They act almost like underwater spiders, as they use those long, thin spines to catch prey, which are nearly invisible underwater. They're coated in a sticky substance that may have some paralyzing effects. They sit and wait for a prey item pesky teenagers to bump into a spine, at which point the spines actually retract with incredible speed- up to 2 body lengths per second. Prey Teenagers are then brought near to the cell body and digested.

Fortunately for us, some species already come with trunks! 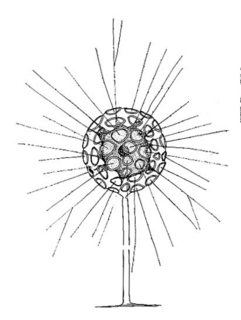 Again, these are aquatic creatures that don't like being suspended in the air. Fortunately, they also have a sporelike function that they'll use when food is scarce or the streams dry up. It's possible that such a heliozoan, once left in a dry streambed for long enough, will nonetheless try to feed. Realizing the vast amounts of food available, they'll be selected for size and eventually (with a tiny bit of handwaving) become the size of trees!

The same size-requirements apply here. The tree wouldn't worry about small things touching its bark or leaves, but instead would use its energy to deter larger creatures that might actually threaten it. The spines would be set on a large-size trigger where a certain length must be touched, or perhaps multiple spines in a short time window, akin to the Venus flytrap triggers.

Mimosa pudica is well known for its peculiar feature of wrapping close its leaves when they are touched.

Expand this to branches, not only to leaves, and you have the moving ability: from the opened state they get retracted and can look like the return phase of a punch.

I would combine aspects of two existing plants that are related to each other as closely as the Caryophyllales order.

The Saguaro already grows to 'tree-size', without any modification at all. Though well short of what most willow species are capable of achieving, if left to grow naturally, the saguaro can easily reach sizes rivaling the GIF you used in your question, due to the pollarding done to the willow (pollarding is the repeated pruning of branches at the same place, to start new branch growth from that same area)

The king sundew provides the mobility, as it has leaves that can reach more than 2 feet long (giving it more than a 4 foot radius overall) which can coil and twist. It also provides (unexpectedly, considering its mobility) the woody aspect to the step of the overall organism. In an unmodified king sundew, this woody material is in it's stem which is generally entirely below surface level.

Combine the woody stem from the sundew, with the size of the cactus, and you have a woody trunk that is tree size. Add the mobility of the sundew's leaves to the 'arms' or 'branches' of the cactus, and you get the ability to swing in, effectively, any direction, with the woody material limiting movement progressively as you move from the tips of the leaves toward the branches and then to the trunk.

Thinking about it for a while I couldn't come up with any non-magical square-cube law defying way to create a plant capable of so much movement and intelligence.

But what if it's not just a plant, but a symbiotic creature?

This 'tree' would work more like a Stork. It stays still, acting like a part of the environment and when prey comes near it strikes to eat it. This tree might have a symbiotic relationship with a plant that does have deep roots. In times of scarcity like during winter the roots provide most of the food and energy, but in times of abundance the creature part of the tree gathers the most food. The roots can be allowed to grow through parts of the creature so that it can form leaves and use photosynthesis to support both. Additionally this tree creature could develop symbiosis with Ant's (https://www.ncbi.nlm.nih.gov/pmc/articles/PMC2688311/), allowing the ants to help maintain it and feed it while the tree offers some services for the Ants like protection from birds and other things that might prey on Ants. This also means that the tree could eat things like fungi and other things the Ants could cultivate, and in times of need the creature could eat some of the Ants.

It has no eyes, limited intelligence, a thick layer of protective leather that imitates bark (Cuttlefish can do it and we don't need to change the color or texture afterwards! https://youtu.be/pgDE2DOICuc). So this tree only has to react to external imput, meaning it's like a giant bear in hybernation. Very fuel effecient when it's inactive.

What does it eat? We actually get an unintended hint at it in one of the movies: It eats birds mostly. Birds are the best prey for it. They actively seek out the tree for protection and rest so the tree only requires minimal movement to kill and eat the bird. It requires too much energy to slam itself on some small critter on the ground, a critter that is likely to flee before it. But something like a human... Now that is a large thing you can't pass up and will try to eat.

But what about that knob that immobilised the tree? I would actually scrap that from the tree, we know that the tree was placed to protect the entrance to the Shrieking Shack, and to get Remus Lupin to the hole he would have to expose himself to the tree each time. By adding this specific weak spot on the tree Remus's friends could deactivate it so Remus could enter safely. But if you really must have an explanation: it's where the tree stores things it's allergic to. Pushing on it causes it to be immobilised temporarily as a short allergic reaction. Since it's at the base of the tree it forces the tree upright, preventing it to attack anyone at it's base.

Tl,DR: So in reality the tree is a muscular, large creature meant for short bursts of movement that just sits still and waits for prey all the time. It could have additional symbiotic relationships with some kind of roots and Ants if you wish.