Appropriate Material for a Red Moon

I have some ideas regarding this, but thought I would check to see what you guys can come up with, as I found some of the ideas here often trump mine in originality and/or plausibility.

So, I have a planet which has a moon orbiting it, but instead of the white/yellow-ish glow that our moon gives us, I want to give it a different color (for example such as Io wich is Yellow due to sulfur).

What I want to know is what kind of stone/mineral/material could I have this moon to be made of in order to give it a red glow? (and I mean ruby like red not the orange like red color that Mars has)

P.S. would having a moon with such a different color have side effects on the plant and animal live on a planet, if it were otherwise comparable to earth?

The most likely chemistry for a red moon is iron (III) oxide (better known as "rust"), which will give it a rusty-red color like Mars. Both iron and oxygen are quite common elements in the universe, and iron (III) oxide is the most stable iron oxide, so there's no real need to explain why your moon is covered in it.

Alternatively, your planet and moon could be orbiting a red star (such as a red giant or an M-dwarf), which would make a moon with grayish regolith like our moon look reddish to human eyes; or your planet's atmosphere might have a chemistry that simply makes the whole sky look red. Excessive amounts of carbon dioxide should do that. I think. Again, like Mars.

If you don't want to settle for rust red and are set on fire-engine red, there are various compounds that will give you that color (as pointed out in the comments), but they all involve rare elements (like chromium), intense geological processes (to forge gemstones), or are not particularly stable (as is the case with organic pigments), and thus you'd have to explain why they formed in such quantities as to coat the surface of a moon and then did not break down over geologic time.

You might also be able to get away with a mineral that fluoresces red. However, I don't know of any off the top of my head that are composed of common elements (ruling out fluorite- fluorine is rare) and would be stable over geologic time (ruling out organics like red fluorescent protein).

You could get red organic pigments to work by having your moon covered with life. Earth is green (parts of it, anyway) because it's covered in trees and grass, all of which are full of a pigment (chlorophyll A, I believe) that reflects green light. Your moon might've evolved plants that absorb green and blue light, but reflect red. There are some plants on Earth that use red chlorophylls, so it's certainly possible.

Whatever reason the moon is red, I suspect the greatest effect on life on the planet it orbits will be in how the inhabitants sense dim light. Our eyes have rod cells for this purpose, and they're somewhat more sensitive to blue light than other colors. This probably evolved because moonlight and starlight are somewhat bluish. On your planet, organisms may evolve cells for detecting dim light (analogous to our rods) that are most sensitive to red light.

I don't see it having much of an effect on plant life on the planet, though it would probably have a pretty big effect on the culture of any sapient species that arise. If they have a red moon, they'll associate the moon with... red things.

Some minerals like Cinnabar can be ruby red, but they are quite a bit rare even in their not-so-pure (and thus not-so-ruby-red) forms. You'd also need all these minerals to be spread out in the surface and for them to stay there, but these tend to be found deeper into the Earth or places that are closer to the surface but that are still very geothermically active.

I'd suggest looking into tholins. These organic compounds form from the solar irradiation of simpler, very common compounds like methane, atmospheric nitrogen and carbon dioxide. They are reddish-brown, usually, but can get pretty red if this shot of Pluto is any indication: 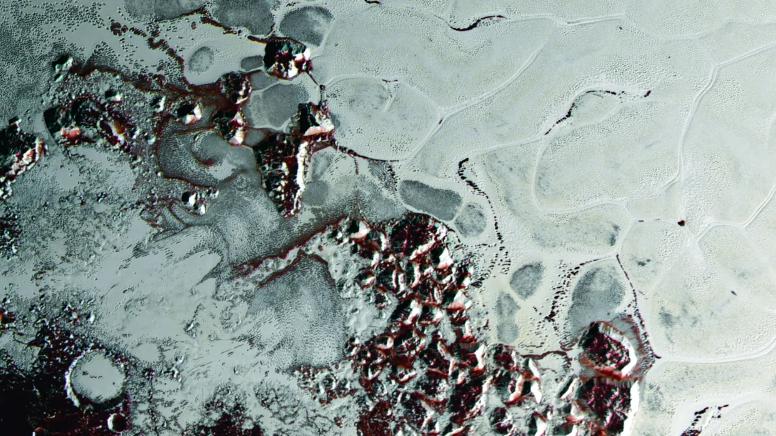 These red fields would be continuously replenished as long as the necessary, abundant compounds kept seeping out of the rock and being played with by the solar rays that would have no significant atmosphere getting in the way of their fun.

Not the answer you're looking for? Browse other questions tagged science-based moons geology or ask your own question.

13
Is it possible to have a Earth-like planet with a red moon, similar to the color of Mars?

13
Blue Cryovolcanic Planet
24
What effect would liquid sulfur oceans, sulfur dioxide in the atmosphere have on visibility, sound propagation and other environmental information?
4
How does the day/night cycle work on a non-tidally locked moon?
3
Rotation period of a planet around a star (sun)
4
How can I have an Earth-like moon?
3
What would the atmosphere of the Archaean Earth look like? (Before massive oxygenation)