What would a Pegasus actually do with its legs while flying?

The question is just as simple as it sounds.

Would it tuck them under like a bird? make running motions like it does when running on the ground? some other movement that actually aids in flight somehow (if so, what is it?)

Assume the standard trope Pegasus, an otherwise normal horse with the exception of the added wings.

I can't think of any reason why a rider would change the answer, but if it does, please explain the difference and why there's a difference.

To address the concern regarding the method of flight (magic vs physics), I've never seen any depiction of any 'standard trope" Pegasus with large enough wings to power it's flight through natural physics alone, so magic definitely comes in to play, but the fact that it has wings at all means physics is also involved. Use best judgement when deciding just how much of each is involved, and adjust answers accordingly.

The question was originally conceived as a bio-mechanics question, related to how the musculoskeletal system of such an animal might cause the wing motions to interact with the leg motions while in flight. But, since other considerations could certainly affect how the animal might behave, the overall question isn't specifically aimed at any single particular aspect of either flight or biology. Instead, if answerers feel that aerodynamics requirements, or any other aspect I haven't considered, would cause the animal to intentionally suppress what would otherwise be the most natural musculoskeletal motion to gain aerodynamic advantage, or vice versa, that's fine. Best answers should provide science-based explanation of why one aspect dominates any others, and causes the motion described by the answerer.

I am assuming you want an answer about aerodynamics. I also am making a minor change to what we normally think of when we think of a pegasus. Normally we just imagine a horse with wings stuck on the back. I think the pegasus would also have small wing-like growths on its hind legs, as far down by the hooves as possible. Then, by straightening its hips such that its feet stick out behind it, it can use those hoof-wing-things just like an airplane uses its elevator or a bird uses its tail. One of many big problems traditional pegasi have is that they can't move their center of lift since they only have one lifting surface, which means they can't change pitch to fly up or down. These hoof-wings correct that

So as far as your question is concerned, they will stick their hind legs behind them and use them as a tailplane, and they will usually just pull their front legs up as tight as they can, to reduce drag. They may stick them out to increase drag; since they're in front, that will also move their center of drag forward and make them more maneuverable at the cost of efficiency.

Apart from flying in a more equilibrium-like state, as was discussed in another answer, I would like to think that the Pegasus would use its legs to keep balance and centre of mass. Sort of similar like what you do as a human when you're trying to balance, you wave your arms around in circular motions. Otherwise trying to reduce drag as much as possible.

When landing I would assume that it lands with the back-hooves first in a galloping state, which would be different from a normal horse, since they jump and land with the front-hooves first. Assuming this, it would probably strech out the back legs before landing, while keeping front legs in, in order to gain enough backwards rotation (just like a bird or plane).

As per my answer to Anatomically Correct Pegasus, pegasi should have a patagium connecting each leg to their wings.

They are going to spread their legs just like a flying squirrel. 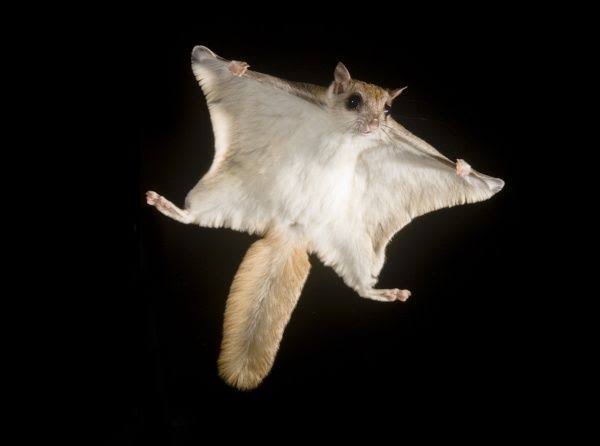 Not the answer you're looking for? Browse other questions tagged science-based biology creature-design mythical-creatures .

19
Could this Very Specific Dragon Fly?
4
Could Centaurs Reload Muskets while Marching?
3
Could a species develop the tech necessary to land on their own moon without comprehending light?
7
Are there any plausible 'alternative' methods of planetary formation?
7
Giant bug noises
8
Can a horse-sized flying creature grab and carry a human's weight while flying?
5
How would martial arts be different for a winged race?
5
How big is a dragon's hunting territory?
3
Could an animal have more than one heart?