How large could a giant turtle get?

Assuming a turtle or tortoise evolved adaptations to become large comparable to that of sauropods. How large could they become (in weight or potentially carapace size)? The turtle needs to be primarily terrestrial.

Not bigger as they were (up to couple of meters in diameter). Or they will stop being turtles:

It all means that with these adaptations turtles would deevolve to something more crocodile-like, as they were at the start of their evolution. You do not need a shell, if you can run fast - it will only slow you down!

But if you look for giant "animal tanks", look at glyptodont (real giant armadillo). First homos were using their shells as homes! Both this, and the largest terrestrial turtle were about the same size (about 2 t weight and 2-3m length), and I don't think this is just a coincidence. It is the limit for biologically created shell to be strong enough to provide reasonable protection. The larger they get - more fragile they become (square-cube law).

The book and TV series "The Future is wild" postulated gigantic tortoise which would fit the bill easily: the Toraton 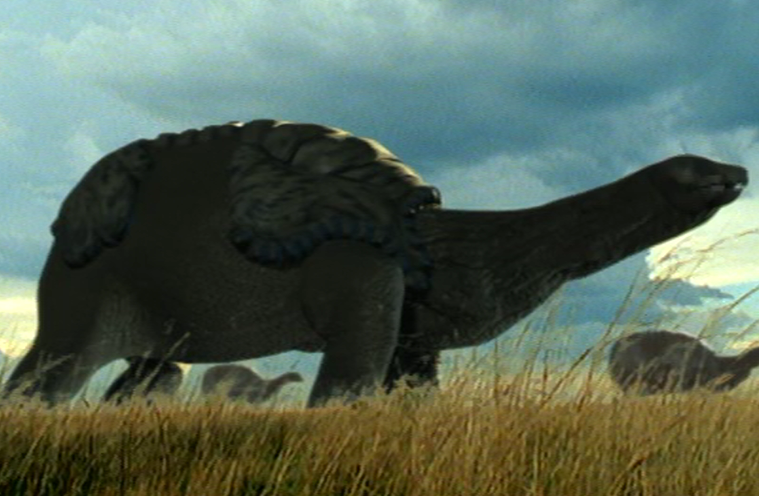 The Toraton is an enormous tortoise from the Bengal Swamp in 100 million AD, in the documentary The Future is Wild.

In an environment such as the Bengal Swamp, where vegetation flourishes, the presence of large herbivores is no surprise. The largest of them by far is the Toraton.

The Toraton is by far the largest member of the ancient tortoise family, which dates back to the Pliocene epoch of the Neogene period. Since 220 million years or so before the human era, in the Late Triassic period, their order has thrived. Their basic shape and lifestyle were so successful from an early stage in their history that they hardly evolved. Now, 100 million years past humans, conditions have encouraged a huge increase in their size, enabling them to exploit the incredible mass of vegetation that now exists in this greenhouse environment.

The Toraton is a cold-blooded reptile, so it does not face the problem of overheating that would confront a similarly-sized mammal.

With an average body weight of 120 tons, this is the biggest terrestrial animal known ever to have walked Earth, more massive than even the greatest of the known dinosaurs, the sauropods, though some particularly large dinosaurs could have achieved a body weight similar to or even greater than that of the Toraton, possibly rivaling or even exceeding the Blue Whale, the heaviest known animal.

So given the proper environment, the humble Tortoise has the potential to reach astonishing sizes if it moves into the niches once occupied by giant herbivours like sauropods, elephants and so on.

The only other feasible way to become larger is likely to go the other way and become a completely aquatic sea turtle, and take the niche of baleen whales straining plankton from the ocean. Of course, what sort of predators exist in the ocean to justify a shell of that size?

I see no problem for sea turtle being as big as modern blue whale. They would only need to develop ovoviviparity as they can't go back onland to lay eggs. No big deal.

Not the answer you're looking for? Browse other questions tagged biology fauna reptiles scaling or ask your own question.

5
Viability of a hybrid endo-/exo- skeletal intelligent (space-age) race
3
Evolving an intelligent avian race with a human-like appearance
19
Could this Very Specific Dragon Fly?
8
Adaptations of a Very Specific Dragon to this Combination of Large Size and Flight
14
How plausible would a fully aquatic bat be?
3
How Would a Filter-Feeding Marine Turtle Feed?
8
How to ride a giant turtle?
7
What Changes Are Needed To Make A Land Vertebrate More Than 100 Tons?