So, I'm designing an alien race/civilisation of carnivore.

I was thinking of a very aggressive specie, who is both the alpha predator of his world and his own main cause of death.

Basically, a lot of them die all the time: reaching an adult age is not frequent, the adults often kill the kids, the adults kill each other very often, there is no hospital, and every period of reproduction ends up in a blood-bath when only one male and one female survive and succeed to reproduce.

Is it possible to each litter have only one baby?

Is there any carnivore species on earth who has only one baby per litter? How can I determine a realistic number of babies by litter to avoid the extinction of my specie? (I have the percentage of death for each of the previously listed cause of death)

Edit: a few stats: 10 years to be able to reproduce. Around half of the kids die before that. Each time there is a reproduction spread (once a year) there are between 1 and 3 deaths. The parent(s) will not be able to reproduce for 3 year if they raise kids. Parent can reproduce until 60 years, but only 10% will reach this age.

You have an interesting premise, but there are some problems with it. Nothing that is impossible to explain or deal with, but some changes are probably necessary. I'll be trying to dissect what you've provided and highlight problems and possible solutions both.

There are almost no species where the majority of births survive to adulthood: the last two hundred years or so of low infant mortality rates in the developed world are a glaring exception. There's a reason why third-world countries (even now) are prone to families with six or more children: it's because, historically, that was what it took to average two surviving adult children (the minimum to maintain population levels), because less than half of newborns would survive their first two years. And this is with humans having great parental investment in each child: almost everything else in the animal kingdom has even worse mortality rates before adulthood.

As such, a high mortality rate in your species' young is absolutely normal; if even half of their offspring reach maturity (you indicate that medicine is basically nonexistent, and I'm not sure if your species is even sapient), they would have to breed more slowly than humans do and have huge investment in each child, which is incompatible with your premise that they seem prone to killing their own kind. Litters of one thus seem improbable; I would suggest an average of two or three to a litter, with a wider possible range of perhaps one to five.

If you want high mortality in the young to be enforced by adults killing the young, this probably entails infanticide; lions make a good real-world example of what you'd end up with. A male who kills another male and claims that male's mate for his own would be killing any young the female already had, so as to make sure more resources would go to the young he will eventually have.

Problems arise for you when you ask why the adults would be prone to killing each other: they might be battling for mates, but if so only one sex (this is almost always the males) will be doing the fighting. I don't see any other likely justifications for apex predators to actually fight their own species; evolution is ruthless in dealing with those who waste their energies on endeavors that don't help them reproduce. As such, their energies need to go mostly to hunting and finding/keeping mates, not killing their own kind and risking disabling injuries for the sake of...well, nothing (unless it's to acquire a mate, hence the exception for mating battles I mentioned). Apex predators tend to favor intimidation or posturing when dealing with their own kind, ways to establish dominance and superiority without the costs and risks of actively fighting (wherein both sides are likely to lose).

You also point out that reproduction periods end in bloodbaths; this implies that your species generally move in groups or packs like wolves, because solitary hunters would have a hard time coming together in significant numbers. Both sexes fighting it out to the last one of each standing is both absurd and wasteful: evolution would favor either only the males fighting to prove themselves to the females, or just settling choice of mates more peacefully. The second case fails to meet your objective, but having one adult male to every two or three females is entirely plausible if the battles are frequently fatal.

This is not far from lions.

Most cubs die and much of the mortality is due to adult male lions. This helps the fitness of the male: killing cubs that are not yours frees up the mother to breed again, with you. Once they grow to be juveniles, most of the mortality among young males is still due to being killed by other lions.

After being kicked out, the young males roam the countryside solo or in small bands, often with their brothers or cousins, negotiating the no-cat's-land between territories of other lions, said Luke Hunter, the president of the big cat conservation group Panthera, in a phone interview. If they stray into these territories, they are likely to be attacked and/or killed. A majority of male lions die during this time, said Gabriele Cozzi, a researcher at Zurich University who wasn't involved in the film.

You could accomplish a lot of what you want by having the adult males be murder machines - killing any cubs that are not theirs, killing their own male cubs if they are perceived as competition, killing each other.

Female lions get along ok but you could have the same murderous competition among them.

The question: where does the civilization come in? Answer - a civilization of juveniles. They would be like a bunch of prepubescent 9-year olds humans; competent, capable, but not violent in the way humans are once the hormones set in. In some species the juvenile males live like this - no pecking order, just dudes hanging around together hoping to get hairy enough someday to challenge the alpha and get the mates. Before reproductive maturity your species bands together for protection from the adults and cooperates and that period is long. Maybe they bulk up and accumulate needed body mass during this time. Then just as the juveniles are driven away (or escape from) from their violent parents, so too individuals entering puberty are driven out of the society of juveniles, to live alone as asocial monsters in the wilderness. It is a poignant scenario.

Some people think this is how humans evolved - we are neotenous great apes in prolonged childhood.

Re litter size: twins will give energy to the story. They could escape their parents together when it was time, and the fact that they are different from their parents will be obvious to the reader. The twins help each other through their young lives but then must split up at maturity or they will kill each other.

A truly "alien" species right here on earth are octopi, who have some form of intelligence, are frequently cannibalistic, and essentially mate once, produce hundreds to thousands of eggs, which are watched over by the female until they hatch, then the adult dies while the larva swim off. 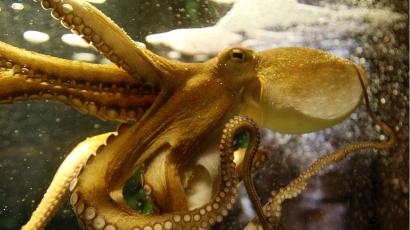 Octopus in the wild

While their life cycle isn't exactly as depicted in the OP's question, it has certain similarities.

Octopi developed intelligence as a response to becoming predators and losing the protection of shells like their mollusk ancestors. Because they are highly vulnerable to predation, they can turn to cannibalism in order to survive, and because of the dangerous environment where they live, they, like many other species, produce massive numbers of offspring in order to ensure the survival of some. Octopi, like many species, don't invest ANY time in upbringing, their only real parental contribution is to protect the eggs, but in many other species the eggs are simply laid and hidden, with no further parental input at all.

Now some of the evolutionary adaptations of other species could be added to create a similar effect to what the OP wants to create. The female might attack and eat the male after sex in order to have enough food to ensure a large clutch of well formed eggs is created. Some species have developed in such a way that the female can mate with multiple different males in order to have a large "selection" of sperm from different males to fertilize multiple clutches. The mating frenzy might resemble death matches to an outside observer.

Short answer is in a dangerous environment, evolution can push for large numbers of offspring essentially broadcast into the environment with little or no parental input in order to ensure some offspring survive to adulthood. Other adaptations will depend on the environment, and perhaps how they are observed from an outside POV may not be what is actually happening.

Not the answer you're looking for? Browse other questions tagged creature-design xenobiology reproduction carnivorous or ask your own question.

2
Self replicant ants from Gamma Draconis
2
Would a venom vaccine work?
1
No hunger cry from birth, is it plausible?
8
Multiple Methods Of Reproduction
6
Growing new teeth, Plausible?
72
Designing an animal that wants to be eaten
3
How to make this species with specific constraints regarding reproduction viable?
22
What effect would a means of reproduction without pregnancy have on the population?
11
Evolution of sexual parasitism in a species with small and intelligent females but large and "brute" males?