What's the scope of an Element Transmuter?

Note: while this process could be extremely useful in a life-or-death fight, it's rather mundane in nature for someone with superpowers.

So, here's my question: could this process lead to other, somewhat more spectacular methods of offense/defense?

For instance, potassium reacts rapidly and intensely with water (an exothermal reaction which heats it to such an extent that it burns a purple flame), forming both a colorless basic potassium hydroxide solution, and hydrogen gas (which reacts strongly with oxygen and ignites). Sodium also reacts quickly with water, to produce sodium hydroxide and hydrogen gas. And since 60% of the human body is water...could this volatile reaction lead to something approximating Spontaneous Human Combustion?

This person would be an omega level mutant in the Marvel Comics scale.

In the 1960s, Louis Kervran claimed to have conducted experiments and studies demonstrating violations of the law of conservation of mass by biological systems, according to which the amount of each chemical element is preserved in all chemical reactions. Specifically he claimed that organisms can transmute potassium into calcium by nuclear fusion in the course of making an egg shell (...)

Let that sink for a moment, specifically the part where it says:

This is the proccess that powers stars. It generates more power per mass than atomic fission. If the character can do that with impunity, then even just a few grams of salt are enough to level a small town.

Fusing hydeogen to make a single gram of deuterium releases 1012 joules. A back of napkin calculation puts that into the proximity of a 2,100 or more tons of TNT blast. And that's just adding one humble nucleon to hydrogen. Going from Sodium into Potassium requires eight protons and some neutrons to go with them.

You know, at this point I believe Kervran's igNobel winning theory could be the pseudo-scientific explanation for the powers of the villain that started the whole Civil War saga, Nitro:

As a result of genetic re-engineering by the Kree, Nitro can transform his body into a gaseous state and explode with a maximum force equivalent to 350 lb (160 kg) of TNT - which can however be multiplied under influence of MGH - and reconstitute himself. 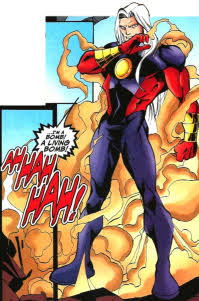 (...) could this volatile reaction lead to something approximating Spontaneous Human Combustion?

Given what the character can do, spontaneous combustion is the least of your worries. They've got to be able to reassemble themselves to survive anyway.

6
How to incarcerate an elemental shape shifter?
3
Element Handling Justification: Water manipulation
3
Is there a way to trap a super-being like Dr Manhattan?
2
Superhuman: Extreme Temperatures Pt.2
35
What's the most effective way to use my skill-copying superpower?
9
What's in it for the most detested and lonely god to perform his duty diligently?