Despite the wide variety of movement strategies employed by Earthling animals, up to an including curling their bodies into circles and rolling, there is one mode of locomotion that is glaringly missing: nothing slinkies!

What I have in mind here is more a whole class of creatures than one specific creature, but to keep it from getting too broad, let's focus on the base case of a simple slinky worm:

The basic body plan is a simple muscular tube, externally symmetric, capable of stretching out or squishing down (like any soft worm) and capable of balancing upright on either end, such that it can move by flipping end over end like a slinky: with one "foot" planted, the other foot is lifted, flipped over the top, set down on the other side, and the process repeats.

So, how / why might such a thing evolve? As lemmas to that overarching question, where is its mouth / anus (does it run from one foot to the other, does it have a "head" in the middle of the body)? What kind of sensory organs does it have? Maybe eyes on stabilizing stalks in the middle, like a squibbon, or eyes ringing the feet? Aside from conforming the the basic end-over-end tube plan, anything goes.

Their feeding strategy is "waiting until someone I can eat falls into my trap", just like weaving spiders, but with an array of tentacles instead of a web. Mind you, they are related to jellyfish, so victims are paralysed by its poison. Staying still is a plus because it saves them energy, so their suction cup "foot" works kinda like a root.

Being able to uproot and going somewhere else is nice if you haven't been able to catch prey for a while in some area. They evolved the ability to slink around probably because having proper feet or flippers would cost them more energy. Those would be dead weight when the hydra is in feeding mode.

As lemmas to that overarching question, where is its mouth / anus (...)?

Ah, the most important part of the question. No animal is complete without an anus. You hear that, sponges?

You see, the hydra is such a miser when it comes to evolving that it said "why have two main body orifices? That's redundant and a profiglacy!". So its mouth doubles as its anus. You might think that is not hygienic, but it sure is more efficient.

And here is a picture of the critter, credit at the upper left corner: 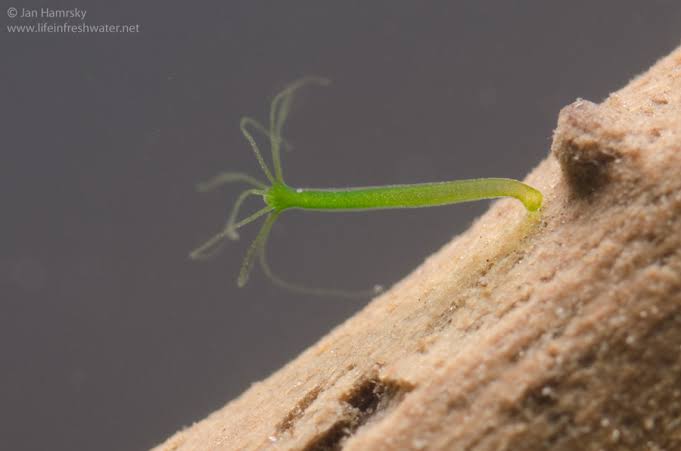 My suggestion is a molluscoid creature combining charasteristics of cephalopods (aka squids and the like) and gastropods (slugs and their cousins).

The slinky has a bilateral body symmetry that lacks an apparent head. On one end of the creature we have the mouth, with teeth organised in a circle perpendicular to the body's axis. Might have a molluscoid tongue there. Internal organs are dorsally concentrated and covered by a mantle, leaving in between the mantle cavity, where the anus and genitals open. The mantle is not hardened by calcium carbonate like in snails, except at the end opposite to the mouth, where it forms hook like extensions. The slinky's metabolism could in my mind follow that of slugs.

The entire creature is tongue-like, similar to a squids tentacle or a jacked slug. Its slinky like movement is accompanied by torsion, as it holds always the dorsal part of its body up. It could have protective plates on its back mantle, provided that they do not prevent movement. The slinky's movement would be intermittent, since it would prefer to grab its surface with its strong mouth. From that position it twist-bends to attach its end-hooks to the surface, then quickly twist-bends a second time to bite down again.

Lacking an apparent head, the slinky cannot have a neural system as complicated as cephalopods, but it could have central ganglia with two main nerve cords. I don't manage to place believable eyes on my creature, but it would sense vibrations, touch, balance and different chemicals.

The only reason I came up with for this freak to evolve is a random mutation that caused an early marine mollusc's musculature to be organised more in a helix-shape. Better end-hooks gave an edge in natural selection, and the support of water permitted a less efficient way of movement to evolve. I see my creature roaming the bottom of shallow bays searching for algae. Its wild style of moving is certainly more noticeable to predators, but it could evolve into an elaborate mating dance, where only the most head-spinning pirouettes are guaranteed to win the bicameral hearts of females. Maybe in time, the slinky could evolve to live on land as well.

My first thought was a very strange leech.

Suctioning mouth on one end, non-eating suction cup on the postior. Worms and leeches seem perfectly capable of constricting and lengthening themselves, and though the classic 'push and pull' of an inchworm may be more efficient, I can definitely say that it's possible to have a slinking leech.

Tentacles are always fun, but as per most creatures sensory organs are probably best situated near the head. Leeches have their anus dorsal to the sucker (ventral would also work, as long as it's not in the sucker). Similarly, eyes are dorsal to the mouth, though if our leach is bending end-over-end we may want a ring of eyes (tentacled or not) - no reason to have eyes on the posterier end that I can see. Given our tube design, respiration should either occur via diffusion through the skin (small slinky) or through lamprey-like orifaces along the body into lungs/gills (bigger slinky).

Should our slinky be semi-vertebrate, they would probably still need to be segmented to allow that worm-like length-ways squishing, and since they're flipping ventral and dorsal constantly maybe this vertebra should be central to the animal.

Not the answer you're looking for? Browse other questions tagged science-based creature-design science-fiction or ask your own question.