Could Devils Tower Be the Model for Rapunzel's Tower?

Many adaptations of the Brothers Grimm tale of Rapunzel have come up with ways to make Rapunzel's tower so unscalable that the only way up is to ask her to let down her very, very, very long hair.

But what if Rapunzel's tower was built with the distinctive grooved walls of Devils Tower in mind? 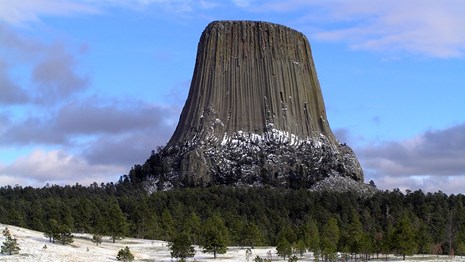 I'm not talking about the height being the same, just the texture on the outer wall. Could such manmade construction be possible? And would they make Rapunzel's tower really unclimbable?

According to the Wikipedia page on Devils Tower

The first known ascent of Devils Tower by any method occurred on July 4, 1893. [...] They completed this first ascent after constructing a ladder of wooden pegs driven into cracks in the rock face.

It could be made by stacking granite blocks, cut in the suitable shape.

Since it was climbed rather early in climbing history, I would say it would not serve too much in keeping princes away from Rapunzel. Probably better would be a wall like El Capitan, which was first conquered in 1958.

The grooves in the Devil's Tower could actually help someone climb it, depending on how the scale of the grooves corresponded to their climbing method.

If the underlying structural material is different from the smooth, slippery covering material, both should be very hard to break, so people won't be able to chop hand holds and foot holds into them, the way mountain climbers do. So the material should be like the stuff that Orthanc is made of in The Lord of the Rings as described in The Two Towers.

Don't have any doors or windows in the tower low enough for anyone to climb up any ladder they might have and then reach up to get a hand hold. So unless they have a modern vehicle with a fireman's ladder, about 20 feet up the wall should be enough to keep the windows out of reach, but to be safe there should be no windows below the one in Rapunzel's room.

The tower should be surrounded by a walkway just below Rapunzel's window. The underside of the walkway should be totally smooth without any possible hand holds, and should extend far enough beyond the tower walls that nobody could possibly hang on to the tower and reach out far enough to grab onto the edge and pull their self up, and to be extra sure it should extend considerably farther out than that.

And there should be nothing immediately below the walkway for anyone to hold on to anyway.

The walkway at the top of the tower should be high enough above the ground that nobody could bring a ladder tall enough to lean against it.

Of course, Rapunzel's hair should reach to the ground, or at least low enough to be reached by someone standing on the ground.

Normally human hair can only grow to about four feet long, and the longest human hair ever was probably about 20 to 25 feet long, which seems a little short for keeping the tower above ladder height. So possibly magic makes Rapunzel's hair several times longer than a non enchanted person could grow. But the problems of having super long hair indicate that readers would probably find hair no more than fifty feet long far believable than hair five hundred feet long.

Of course such a tower would seem to be impossible to get Rapunzel into before she is there to let down her hair.

Presumably there originally was a manually operated winch or a rope ladder to get up the tower, and once Rapunzel was inside that winch or rope ladder would have been hidden in a locked closet, preferably before Rapunzel was old enough to remember it and think about using it as a less painful way of bringing people up, or even as a way to get out of the tower. Or maybe it was thrown down outside the tower.

(one way for Rapunzel to make people climbing up her hair less painful would be to wrap it around a hook or something attached to a wall before letting down the further length of it, thus having the person's weight pull on the hook and not on her head.)

No need to look to the New World.

In Europe there are lots of old castles standing round. In some models the place of last resort is an inner keep, a big strong tower. In many cases this keep did not have an entry at the bottom, but halfway up. In times of peace there would be wooden steps up to this entrance, but in war they would destroy this, and you could only get in if the people inside let down a ladder or rope.

It would not be remarkable if sometime in all those centuries some maiden let down a rope to let a favoured suitor in, whether of hair or any other kind of fibre.

Not the answer you're looking for? Browse other questions tagged reality-check technology construction or ask your own question.

4
How to build a tower that reaches dozens of miles into space
29
Could the Tower of Babel actually stand?
22
How could the current model of the Solar System have been recognized and accepted earlier?
50
Is it feasible to have a literal ivory tower?
25
Moving between levels in a gigantic tower-world?
7
How high could a Lego tower be?
9
What materials could create a translucent tower?