is it possible to terraform a planet made of human excrement into habitable planet?

my question is pretty much in the title and i mean in "habitable planet" like earth, but not necessary to be same size or content.

so i was thinking rather than finding habitable planet which probably contain extraterrestrial lifeform already, and can possibly bring many problem from invasion/war,unknown space disease like from "war of the worlds movie bacteria stuff" or like the first contact with native people,political or social like living together with this extraterrestrial that require adaptation either culture or the land itself,the colonialism stuff.

and finding suitable planet to terraform is quite a gamble need thorough research and require different formula or material for the terraform.

why not just make the planet itself from accumulating compressed human excrement and just bring it to the suitable orbit or star and start terraforming, at least with this i believe the formula or material require would be the same, while also can be mass produce if human need new land, also i believe finding suitable star is more easy than suitable planet with different distance.

here some example visual spaceship from starwars (not necessary to be round shape so dont take it to literal) with my paint to point the core or the inside that contain compressed human excrement, with the outer layer can be stretch or expand to give room if it out of capacity and can be split like egg or scater into smaller ship to let it out so the ship can just focus to keep moving to their destination while the human excrement can accumulate or produced and i assume the human excrement can give methane as an extra fuel. 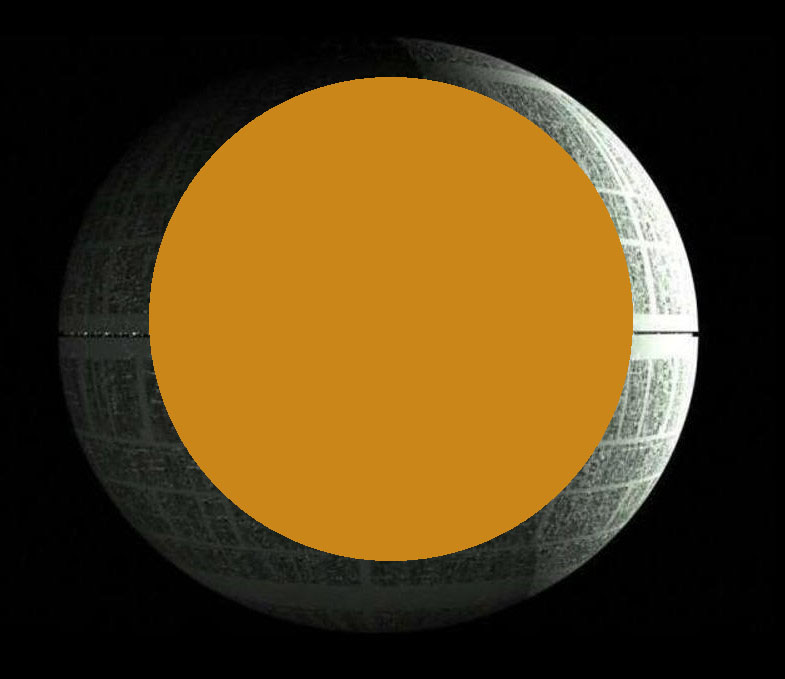 i believe maybe it can be made from accumulating asteroid too but i think it require to mine the asteroid and its a moving object so it will need the ship to follow around while full of danger from flying debris or another asteroid also i think asteroid is mismatch of many mineral wth different hardness its probably hard to compress without endangering the ship.

Average amount of poop produced an an average human in an average day, on average: $0.5kg$.

I'm not sure your plan is very viable.

To answer your question in a slightly different way, related to Kepotx's comment, why on earth would you do this? That's an enormous amount of very useful biological material and water, and when you form it into a planet almost all of it will be on the inside, basically inaccessible, doing nothing more useful than bending space and holding up the surface.

If you had that much poop to spread around, you'd do a much better job just dropping it onto the surface of an existing rocky world as part of the process of terraforming that, instead. Poop is better as a growth substrate for plants, bacteria and fungi than rock is. Use it where it can do you the most good.

The total biomass on earth is something like $10^{13}kg$. Poop is about 25% solids, 75% water, so with a mere $4 * 10^{13}kg$ of poop (which would take your trillion people a few days to produce) poured only a boring rocky world, you've got the makings of a nice (if slightly malodorous) desert world. You could do this many billions of times if you had a moon's worth of poop. That's how wasteful planetbuilding is.

Collecting teratonnes of human waste is left as an exercise for the reader.

The main reason is absence or great shortage of elements that make a rocky planet:

Check this as a more authoritative opinion - moles and poop does not differ much at such scale. Seriosly - you do not need to separate humans from their excrements. Result would be the same :)

Not the answer you're looking for? Browse other questions tagged terraforming .

18
What would push a civilization to terraform a planet considering the complexity of this process?
6
Is it possible to terraform a hot planet?
9
Terraforming for robots
10
A planet made of trash?
5
What are the minimum set of physical characteristics to define an Earth like planet?
7
Could a terraforming project use a metallic-asteroid-based magnet to protect a planet from the stellar wind?
11
Terraforming Antarctica: Is it possible to make it habitable without harming the Earth?