How to realistically deal with a shield user?

Fantastic universe, but not necessarily magic involved in the process. You face a guy who has a shield (tower shield or not). You do not have a shield, but you are a better swordsman. How do you win?

According to Dark souls, your best option is to kick the shield, but realistically speaking it is hard to think of better ways to leave yourself exposed to a counter attack. Other video games taught us that waiting for your opponent to attack and leave an opening is the best way, but if your opponent is worth his salt he will likely block most of his openings (as shown in this video).

So my question is: how can a skilled fighter (with swords, maces, etc) deal efficiently with shield users, other than tiring him or reducing it to splinters?

FYI: Yes, I do consider a shield a weapon as much as a mean of protection.

Post-answer edit: TheDyingLight answer was the most complete of all (mainly because my open question not specifying the weapons/armors involved), but please check the rest of the answers too. Each one adds a new detail, a new point of view on the matter that you cannot ignore and certainly I will not. As my first post on this site, I sincerely thank each and every one of you.

I practice early medieval (Viking) style semi-contact as a hobby. With blunt steel weapons not with some LARP toys. I can tell you how we deal with an enemy with a shield and then some historical methods I know. Now our fights are not entirely realistic, they do not devolve into fierce unarmed struggles, at the end, where we attempt to scratch out eyes and bite. Additionally, an enemy is "dead" after one hit. This too is unrealistic as there is an important difference between the stopping and killing power of a weapon. Being mortally wounded and still fighting on for some time was a common thing and truly problematic. There is an account of a rapier duel where both combatants pierced each other about a dozen times until they both dropped dead. This is bad for obvious reasons. You want to take out the other guy while stopping him from taking out you. You do not want to stab a sword through his belly that he does not notice in his adrenaline rush. It might get stuck and now you are unarmed in close melee distance to a guy who is still armed and combat-capable for a few more seconds. With that out of the way, the following list will go through your weapon setup and detail the options you have. I will assume the shield-bearer has a round shield and a Viking age sword. Techniques might vary if the defender wears some other kind of shield.

Traditionally one dragged the shield out of alignment using the edge of their own shield, if you're using a sword but have no shield then there are two possibilities:

There are various relevant old jokes, such as "if you want to get there, don't start from here", or perhaps suggestions to avoid entering into an arse-kicking contest if you only have one leg.

Given that you've got yourself into this mess already, my first thought would be "distract my opponent so my friend can stab him in the side". If you've managed to get into a fight with a better equipped opponent and failed to bring a friend (and seriously, at this point you should be reconsidering your career) the best approach may be just to run away (or "make an expedited retrograde manoever" if you find the idea of running away to be distateful). You're probably less encumbered than your opponent is; put some distance between you and them, find some terrain that you can use to your advantage.

Did you bring a side-arm? Something like a pilum would be ideal, though they are perhaps a little large. A francisca might also go down well, and there have been reports of them being used to break shields. Other smaller and lighter throwing weapons are unlikely to help, especially against larger shields.

No side arm, no friends, no escape?

The proximal cause of death at this point is likely to be stupidity, but you may yet escape if you're lucky. This is going to rely on your opponent being inept (a dangerous gamble), or being less fit than you (ie. the tiring out that you wanted to avoid) or you levelling the playing field by removing either their weapon or their shield from play without getting killed yourself (challenging, even against less skilled opponents). Frankly, I don't fancy your chances.

But enough changing the subject.

I'd like to go one up on Ash's perfectly good answer and suggest wearing a good suit of armour and wrestling. 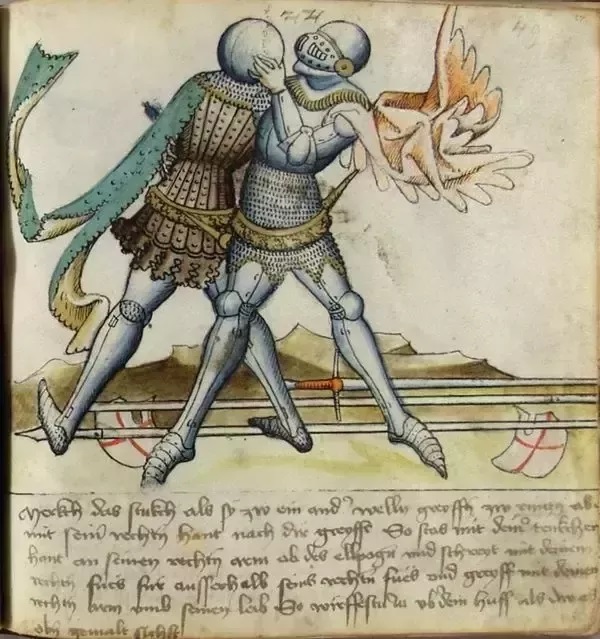 This isn't an unreasonable tactic, after all heavy armour can be pretty difficult to get through with hand weapons. Techniques like half-swording are already important in that situation, and necessarily bring you closer to your opponent, so your poorly-equipped attacker might reasonably already be quite familiar with getting very up-close-and-personal. Parry or bind your opponents sword, and chuck yourself on them before they can bash you out of the way with their shield. Once you've got into a good struggle snuggle, the shield will go from being a useful bit of defensive kit into a serious hinderance.

You might be able to apply the same technique if you were poorly armoured, if you were desparate. Again though, I don't fancy your chances.

I suggest using axe - it's the weapon specifically designed to break shield (especially strapped one, which the axe can also break or cut their shield arm if swing directly to the shield) and it can also hook the shield. Here an image how to hook the shield to the side: 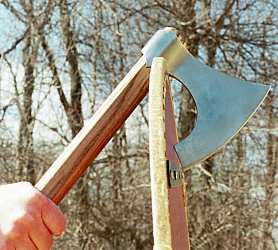 If the user must use sword,this falx sword can deal shield (especially strapped one) and cut the enemy limb (depend on the shield type since real scutum/tower shield is thin) or hook the shield too. 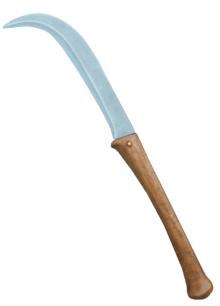 Here are some example images from a quick google search (I don't know the real source is) it force roman to wear special arm guard and modified their armor just to deal with the Dacian falx men. 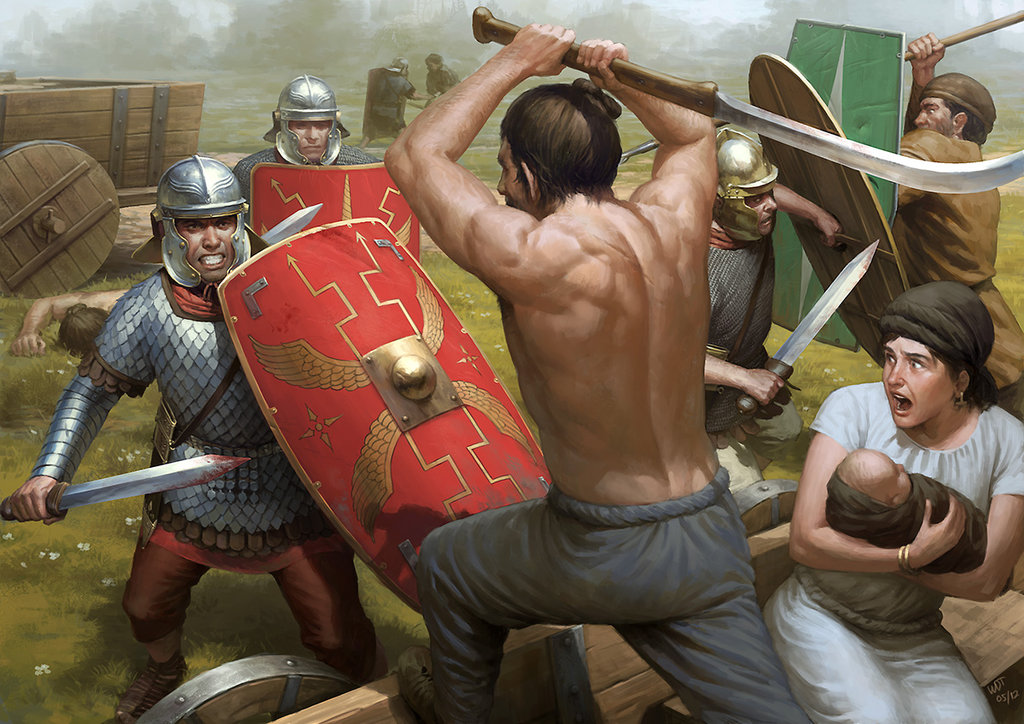 Also, falx and two-handed axes like halberds or Dane axes can just reach around, ignoring the shield to cut or hook the person's exposed body directly - like their head, neck, arm, leg, or other body part not covered by the shield especially the arm that wield the weapon to unarm them.

Using the same approach used by sports, where the defending team is actuating a solid defense, the key to break the wall is: keep trying and feinting until the defender leaves an opening.

In basketball the attacker keeps moving the ball around, same in soccer. In chess or in box the attacker prepares attacks trying to weaken the defender position. And so on and so forth.

the threat is stronger than the execution

Just because you have a sword, you have already an advantage: you can feint an attack, but the shield bearer cannot feint a defense. It's either defend or take the blow.

With the proper combination of movements it is possible to force the defender to leave an opening and then strike.

(if you have anything which can obstacle the defender movement, that is even better: throw a row or a net on the ground, and let he stumble in it while dancing with his shield to block your feints)

(Assuming your enemy has a shield and sword, not just a shield...)

Kicking never seemed like a good idea to me. If it's a tower shield, it would be like trying to kick in a door that has someone leaning on it from the other side. You'd just as soon hurt your own leg. A smaller shield would be very hard to kick as the target is small and he would dodge it, besides he could then grab your leg and make you fall or stab it. If you were going to kick you might as well kick his exposed legs or stomp on his feet. Maybe if you had some kind of spikes on your feet or knee...

Although one wonders the wisdom of fighting a shielded man in the first place. In combat, defense naturally has an advantageous position, but less initiative. It cannot act, it must react. The attacker dictates the terms of the engagement. Maybe defeating the shield user head on is your only option... Or maybe you can ignore him entirely, and go for something else that he is not protecting, but is important to him. He will either be forced to concede an objective to you, or he will attempt to chase you down with his shield, which puts him at a disadvantage. Of course, conversely the shield user's strategy is likely to be to sap your initiative and force you to take him head on.

Besides the ideas put forth already, from fighting in the SCA there were three methods of dealing with a shield, besides brute force or lightning speed

1) As has been put forward, kick or strike the outside of the shield with great force, prying open room for an attack on the inner edge (nearest the wielders center line)

2) strike the inner edge of the shield, pushing it in, which causes the outer edge to provide less protection for the side and back. Then attack, using a long weapon, at the backside of exposed side or back. You are reaching around the shield when you do this.

3) Feint and cause the defender to raise the shield to protect their face, and then time the real attack for your backswing or the spin the sword technique in your hand (forget the proper name) when they will lower their shield to get a look at what you are doing.

Not the answer you're looking for? Browse other questions tagged warfare weapons medieval .

12
How can a society deal with berserkers?
6
How to deal with our giant?
13
Trust Magic and combat
17
How to realistically implement magic-users in medieval warfare?
1
How would a medieval army conquer a treetop city?
16
Is it possible to make sharp wind that can cut stuff from afar?
11
What are the advantages of a mechanical swordsman? What upgrades would make him superior to a human?
8
Dedicated castle assault unit