I've been using this helpful diagram a lot for worldbuilding.

Now I came to think about the fact that helium is more massive than hydrogen, thus a scenario where hydrogen escapes, but helium is retained is conceivable and suggested by the diagram. Since this line of helium retention but hydrogen escape lies between the ice-giants and terrestrial planets, super-Earths come to mind as plausible candidates for such atmospheres. After all, a super-Earth might be a mini-ice-giant or a huge, terrestrial planet. Thus I designed the two following scenarios and would like you to critique them concerning their plausibility. If you have any additional thoughts about these worlds I would love to hear them as well. This question and this answer espacially already provided some interesting information about the conditions on a planet with a helium atmosphere.

As a low-mass-ice-giant/mini-Neptune/thick-envelope-super-earth (ca. 8.5 Me) Wet formed outside the frost-line and migrated inwards where it got hot enough for its hydrogen envelope to escape (ca. 230 K). According to my back of the envelope calculations, a 95%+ helium envelope of about 0.2 Me should be retained. This setup sounds quite similar to Sol's ice-giants, so a similar internal structure should be expected; a stereopalagic ocean-world with an HO2, CH4, and NH3 ocean, which solidifies deep down into exotic ices.

Dry is a rocky super-Earth which formed inside the frost limit with a substantial iron core (ca. 2 Me, ca. 1 Re). Like Earth, it accumulated a primordial hydrogen and helium envelope, yet unlike Earth it only lost the hydrogen and a small fraction of the helium as its parent-star ignited. I assume that the plausible pressure range of such a planet might go up to 1000 atm of helium (I'm pulling this out of a hat, what would be a plausible figure?), yet Dry is a moderate chase since the 400 K hot planet lost a significant fraction of the helium during a major impact. Thus the atmosphere of Dry contains 5 atm He and 1.6 atm N2. It seems surprisingly earthlike apart from the helium.

Again, are these scenarios of helium atmospheres plausible or are there issues I missed?

EDIT1: It has been pointed out that the existence of a primordial hydrogen-helium atmosphere on earth is unproven. DRY is possibly impossible.

A helium planet is a planet with a helium-dominated atmosphere. This contrasts with ordinary gas giants such as Jupiter and Saturn, whose atmospheres consist primarily of hydrogen, with helium as a secondary component only. Helium planets might form in a variety of ways. Gliese 436 b is a possible helium planet.

Helium planets are expected to be distinguishable from regular hydrogen-dominated planets by strong evidence of carbon monoxide and carbon dioxide in the atmosphere. Due to hydrogen depletion, the expected methane in the atmosphere cannot form because there is no hydrogen for the carbon to combine with, and hence carbon combines with oxygen instead, forming CO and CO2. 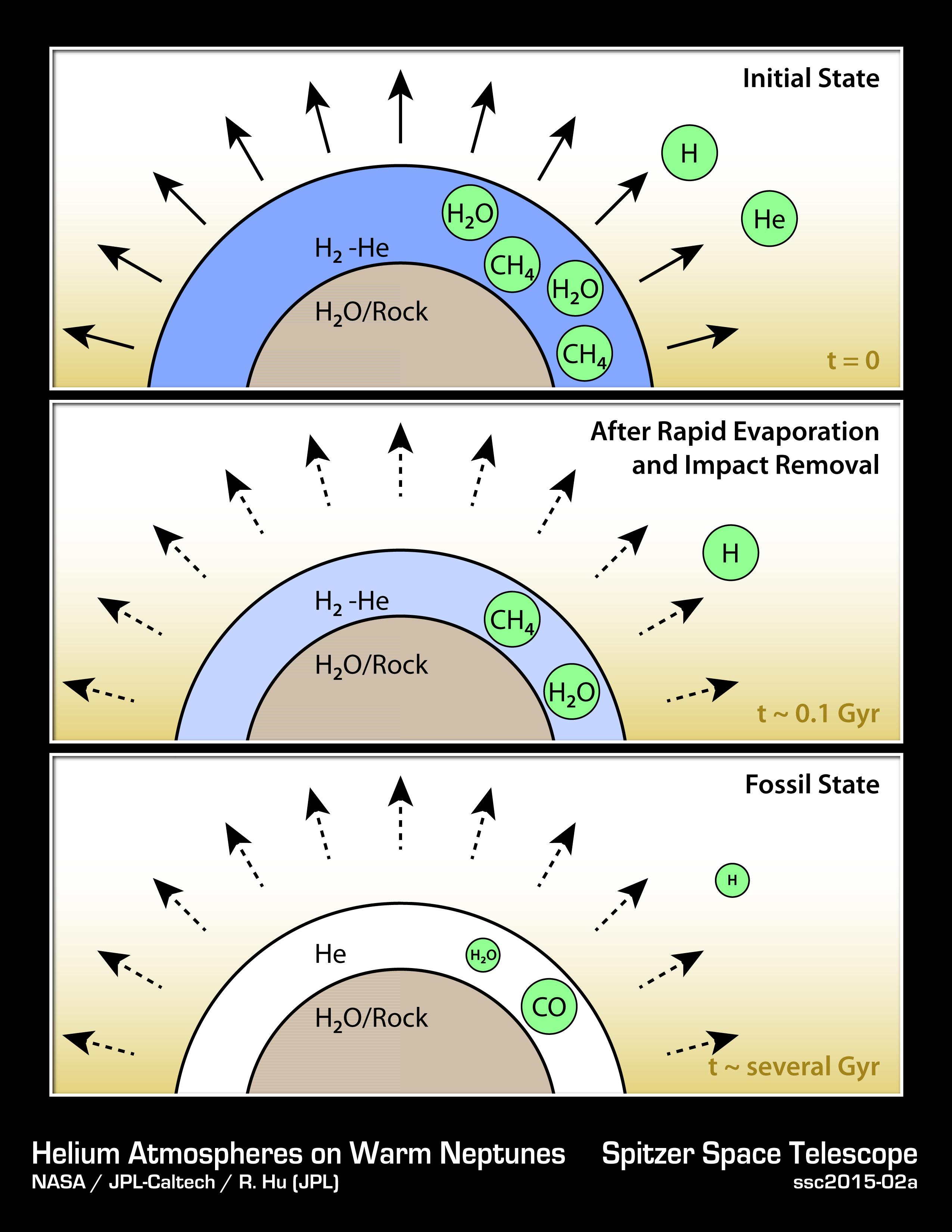 A possible helium planet can be Gliese 436 b

However, when the radius became better known, ice alone was not enough to account for it. An outer layer of hydrogen and helium up to ten percent in mass would be needed on top of the ice to account for the observed planetary radius. This obviates the need for an ice core. Alternatively, the planet may be a super-earth.

Wrapping up, if the helium planet forms by losing hydrogen, the wet scenario is less plausible: there would too few hydrogen to form large amounts of water.

Not the answer you're looking for? Browse other questions tagged science-based planets physics atmosphere chemistry .

5
Impact on the sciences with helium instead of nitrogen

4
Exoplanetary Review: Acid Rain
0
Can we manipulate the Sun, gas and ice giants to create more habitable planets and extend the life of our sun?
8
Are these atmosphere compositions for habitation in space plausible/do they cause problems I don´t see?
10
How could a breathable ultra-high pressure atmosphere form?
3
Potential atmospheric compositions given a temperature range?
3
Is my binary planet realistic?
6
What would be the consequences of an Earthlike Planet retaining helium in its atmosphere
4
Can a super-Earth of Approximately 1.5 Earth-Radius and 3.0 Earth-Mass Be Habitable?
4
Biogenic Hydrogen on Terrestrial Worlds
6
How un-dense could a super-duper-Earth be if that super-duper Earth was bigger than Neptune?